A Blackened Mirror is a fascinating and deep turn into secret Historical Fiction from Jo Graham. 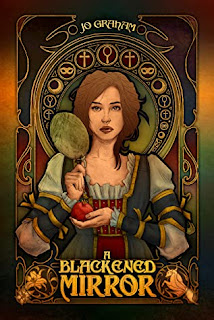 Giulia Farnese has a problem, and it is a rather large one. She is bright, intelligent, curious, but her dowry is not large and she is growing up in a situation that seems to have destined for a life of obscurity and quiet desperation. Until a chance encounter brings her into the circles of a powerful family in Rome, a marriage, and eventually meeting one of the most infamous men in history.  To say nothing of the demon Asmodeus...

This is the story of Jo Graham’s turn to secret Historical fiction, A Blackened Mirror.

Secret histories are elusive, slippery things. Most especially ones that involve magic.  How do you show the events we know from history (or at least can be researched) and yet find the room to put not only events we haven’t seen but add a supernatural element, plausibly, to the mix. What Graham does in A Blackened Mirror is to use the beliefs and ideas of the time, belief in communion with demons (and angels) as sources of information and power. Giulia turns out, in Graham’s secret historical world, to be a Dove, an innocent virgin who has always been able to see, but is turned to the purpose of being the mouthpiece for a demon. The fact that she is ostensibly married to a lunk who has been very carefully instructed not to deflower her so that she can remain that innocent virgin is a continual source of conflict and frustration for her.

Giulia’s existence as a mouthpiece for a demon, untouched and unwanted by her husband, kept in a house in Rome basically just for this role alone, is an intolerable one to her and is the focus of this very character-driven work. Giulia is also bright enough to realize that this role for her is a limited one. She can’t be kept as their ‘Dove’ forever, untouched by her husband, used merely for the demonic ritual. Eventually she will outlive her usefulness, and she will be left without resources, support, children. Her brother Alessandro too far away to help, no other allies or help.

That is something else that the novel gets very right. While this is a tale from a woman’s perspective, and shows the power and ability of the main character, it is firmly and completely grounded in the time and it shows the realpolitik  and calculations that a woman needs to make in this time and place to survive. It is a very patriarchal society, and finding power and security in such a world is a very difficult thing to achieve. Giulia’s story, really, internally, is a sense of balance for her. She needs to find a place to stand, a life to lead, to find herself some sense of stability and security. Life is tough, life is hard and Giulia understands that. Throughout the events of A Blackened Mirror, finding that backing, that security.  But at the same time, Giulia Farnese has the competing urge within her for the life that she *wants*. She wants a life and an opportunity to learn, to grow, to fulfill her potential. Throughout the novel, Graham makes her heroine intellectually curious, a reader in an age where few women are taught reading, someone excited by what would call the Italian Renaissance. But to be a woman who has access to that intellectual richness is a far more perilous path for Giulia, for it is a role and place in society that is far less secure, and one might even say, far less respectable were she even to achieve that role.

Even among the major plotlines of the novel, the political motivations and moves that Giulia, as the Dove, gets caught up in, the major conflict of the novel is this character one. The comparison in my mind is Alma Alexander’s retelling of the Theodora story in her novel Empress. Callidora, lowly born, rises to power and eventually as wife to the future Emperor. But at every step in that novel, there is the conflict of trying to find a life of security versus what her heart, her mind, her desire pulls her toward. How that conflict is resolved is central to her story, and so it is in this novel as well.

Going back to the theme of Secret Histories again, this is a secret history, not an alternate history, and so readers who are familiar with Giulia’s life are going to know how this story is going to run. It is NOT a secret or a spoiler in this novel to say, then, that Giulia is destined to become the mistress of the fearsome Cardinal Rodrigo Borgia. Perhaps if the name Rodrigo Borgia is not familiar to you immediately (especially if you never watched the TV series The Borgias), then the name of his daughter, Lucrezia Borgia, will ring a bell with you.  Lucrezia is an important character in this novel, to be sure. However, Lucrezia is nine years old.  She’s a somewhat precocious nine year old, but she is not the stereotype of the man-killing femme fatale that she is often tarred with in popular culture. I fully expect, however, given the nuance that Graham gives Giulia, Rodrigo and the other characters here, that in future novels (and yes, this is the first in a series) that she will develop interestingly. As well, of course and more important, Giulia. She IS one of the most important figures of her time, and even by the end of this novel, her story is only getting started.

To go more generally on the novel, the worldbuilding in the story is deep and rich and immersive. Graham gives us a very intimate view of life in Italy in the late 15th century. Giulia’s point of view, on her home estate and in Rome, is intimate, nuanced and compelling. The Rome of this era is very different than the Rome of the Ceasars, or will soon be in any event, with the Medieval Era of Rome fading, and the Roman Renaissance just about to kick off. The power politics between the Roman families and factions feels particularly well rendered. The Papal seat is the big prize that all the families are maneuvering over, but there is plenty of nuances and opportunities for these families to get advantage over each other (which of course, feeds right into why Giulia was brought here!)

There is a strong focus on the numinous  in the novel as well. There are the strong Christian elements, given Rome, the Vatican and the focus on their power politics already mentioned, and much of the theology is straight up Catholic doctrine in that regard. There are characters of all sorts of religiosity in the book, with differing levels and types of belief. But it is not strictly Christian theology and religiosity in the book, for Giulia feels very drawn to Prosperina. Aka Persephone. That identification with Persephone and the Persephone is a strand that follow Giulia throughout the book, and it shows how the Hellensitic knowledge and beliefs and idea would and did influence the Italian Renaissance.

A Blackened Mirror shows the strength and range of the author, and I look forward to more of La Bella Farnese’s story in subsequent volumes

Bonuses: +1  for a strong central character and rich and deep nuance in her story

+1 for interesting and crunchy theological worldbuilding

Penalties: -1 the single POV shows strength, but the lack of additional points of view do limit the book slightly