Review: Other Covenants: Alternate Histories of the Jewish People 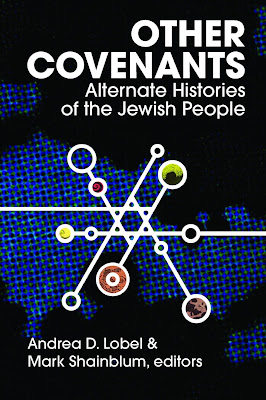 After an uncertain couple of years, during which it seemed at times as if this project might not be completed, the anthology Other Covenants has finally, joyfully, seen the light of day. Spanning both the strictly historical and the fanciful, Other Covenants contains an enormously varied panorama of possible fates for the Jewish civilization. Compiling, producing and publishing this collection is the result of a monumental effort of perseverance, a worthy testimony to the heroic resilience of Jews in our real timeline.

As befits a proudly bookish people, almost all the stories in this anthology are themselves about storytelling. In the opening entry, To the Promised Land by Robert Silverberg (first publication, 1989), set in a world where the Exodus was a failure and the Jews never spread out of Egypt, a scholar is recruited to write a new, more ambitious Exodus for the space age. This text is perfectly paired with the one that closes the book, Shtetl Days by Harry Turtledove (first publication, 2011), in which the story of the Jewish people maintains Jewishness alive even beyond the people itself.

Some of the metastories are presented in the form of poetry. The Golden Horde, Psalm for the First Day of Space Travel and The Green Men Learn to Read by Jane Yolen (written for this anthology) constitute a saga of interstellar exploration that its protagonists immortalize in writing. Meanwhile, Another Son, Covenant and One by Seymour Mayne (first publication, 2018) alter key episodes of Genesis, resulting in new versions of Scripture. And Miryam the Prophetess by James Goldberg (first publication, 2018) suggests a much worse end for the Pharaoh.

Other entries resort to the time-tested device of the tale inside a tale. Why the Bridgemasters of York Don't Pay Taxes by Gillian Polack (written for this anthology) is written in the style of a devotional manual that explains the supernatural circumstances that led to a de facto reversal of the Edict of Expulsion of 1290. Yossel the Gunslinger by Max Sparber (written for this anthology) adopts the form of an oral narration, set in a version of the Old West where cowboys wore black suits and sidelocks.

A few selections went for a spy thriller vibe: The Golem with a Thousand Faces: A Chronicle of the Second Global War by Claude Lalumière (first publication in Italian, 2021) dramatizes the multiple competing claims to Jerusalem in the character of a secret triple agent who works to save the holy city for a fourth interested party. Meanwhile, The Time-Slip Detective by Lavie Tidhar (first publication, 2014) turns the metafictional lens on itself and dreams of a more prosperous Israel obtained at a more grievous price. And Biographical Notes to 'A Discourse on the Nature of Causality, with Airplanes' by Benjamin Rosenbaum by Benjamin Rosenbaum (first publication, 2004) is a pulp adventure set in a timeline where Judaism abandoned the hope to rebuild the Temple.

Curiously, a few participants in the collection coincided in imagining a different history of the film industry, with more participation from Jewish actors, directors and producers. Nights at the Crimea by Jessica Reisman (first publication, 2009) blurs the borders of reality with soft touches that demand rereading. The Premiere by Hunter C. Eden (written for this anthology) explores what happens to characters whose lives end up following the conventions of gangster cinema. And The Golem (1933) by Gwynne Garfinkle (written for this anthology) rewrites an acting career boosted by a film that our world never got to see.

At the other extreme, we get timelines that launch Jews into space: If the Righteous Wished, They Could Create a World by Jack Nicholls (written for this anthology) is an existential parable where the image of God replicates the image of God, while A Sky and a Heaven by Eric Choi (first publication, 2022) imagines a deeply moving struggle to save the shuttle Columbia.

As I said above, most of these alternate histories contain additional stories nested inside of them. Protagonists may be tasked with creating a story, or make a pivotal choice inspired by a story, or lead lives in accordance with the conventions of storytelling. Written in the style of letters, or newspaper pieces, or diary notes, or lost manuscripts, these selections speak of a civilization that conceives of itself as playing a role scripted from eternity. Reading Other Covenants is a fitting way of understanding the people that perfected the method of apophatic reasoning: it's a series of glimpses of what it is, obtained by traversing all the ways it wasn't.