Though this be madness, yet there is method in it 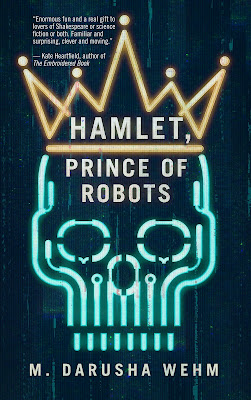 No longer the seat of Danish monarchy, Elsinore is now a corporation, a leading manufacturer of human-like robots. The murdered Hamlet senior was the Humanoid Artificial Mind (Learned Emotive Type), a model that represented a huge leap ahead in robotic innovation. Instead of a queen, Gertrude is a CEO, whose hopes for Elsinore's bottom line now depend on the success of her latest creation, the Hamlet v.2. If the company doesn't maintain dominance of the robot market, its (figurative) throne will be snatched by its main competitor, which is aggressively promoting a rival model, the Fortinbras. But one night, a portion of old code from Hamlet v.1 copies itself into the hard drive of Hamlet v.2, and a quest for revenge begins to take shape.

Everything's better with robots, and a retelling of one of the biggest classics in the Western canon is a sure attention grabber. However, throughout the reading of Hamlet, Prince of Robots, one nagging question persists: What's the point of writing a retelling that doesn't change the story? Act by act, scene by scene, the character beats in this novel are exactly the same you remember from high school English. In the scenes near the end, the prose evokes a foreboding aura that to some readers might seem to promise a twist, but that's not what we get. If you know what happens in Hamlet, Prince of Denmark, you already know what happens in Hamlet, Prince of Robots. At first sight, the effort of writing this novel (and reading it) can appear redundant, but author M. Darusha Wehm's choice of keeping the plot intact is a clearly deliberate one, so the temptation to accuse them of laziness would be premature. A fair analysis of this retelling requires more than counting the differences. While it's true that the reader who opens this book should not expect surprises, what is instead in offer is something subtler. The point of this book's existence is not so much what happens (because that's a task Shakespeare already undertook), but to whom Wehm proposes it can happen.

As a drama that was already centuries old when Shakespeare reinvented it for the 1600s, Hamlet is unspoilable. The king has died, there's a new king, and the mourning prince receives an otherworldly revelation: actually, the king was murdered—by the new king. From that moment on, our protagonist agonizes under the competing impulses of hatred, piety, honor, loyalty, resentment, grief, propriety, shame, duty, self-hatred, hubris, and a godzillion unresolved mommy issues. He hesitates when he shouldn't, jumps to action when he shouldn't, and causes a cascade of calamity that ends with himself and his whole family dead, his enemy and his whole family dead, and the kingdom conquered by a foreign army. The tragedy of Hamlet has been lauded as a psychological masterpiece, and its protagonist is one of the most mutilayered, profound, and arresting portrayals of the contradictory forces that inhabit the human heart.

What Wehm insinuates by setting Hamlet's story in our near future is that such a typically human cocktail of passions can also take hold of a machine's heart. When writing their version of the Hamlet tale, they didn't need to alter any character choice: just by faithfully repeating the same incidents and putting the same famous dialogues in the voice of an electronic protagonist, Hamlet, Prince of Robots makes the provocative suggestion that the particular blend of emotions that defines our humanity is not exclusive to humans. Of course, finding a human soul in a fabricated body is a well-known literary device since at least Frankenstein. That's what Ben H. Winters did in 2010 when he wrote Android Karenina. But it's one thing to say that machines are capable of human emotions, and it's another to put a machine in the role of who may as well be the most human human known to Western culture.

As one of the great characters of literature, Hamlet has been seen as representative of the most unique traits of humanity, and for long, that process of definition by illustration was one of the functions of literature. If you wanted to know humans, the idea went, you only needed to spend some hours in the company of Anna Karenina, or Don Quixote, or Emma Bovary, or Captain Ahab, or Rodion Raskolnikov, or Orlando. By making the acquaintance of the great characters, you were supposed to gain a clearer understanding of yourself. But Wehm warns us: No, not even those near-perfect dissections of the human soul can tell you what humanity is, because an artificial being is just as capable of the same raptures of feeling. A tacit question necessarily follows: If robot Hamlet can express preoccupations identical to those of human Hamlet, with as much intensity and sincerity, then what, if anything, is the human essence?

Furthermore, if questions concerning humanity are revealed to be applicable to robots, an even more worrying implication can be raised, that questions concerning robots can apply to us. In Act 1 Scene 2, our brooding android reflects on his existence and realizes he doesn't know how much freedom he was designed to have: "He wondered if it would be different if he could be certain that his feelings were his own, that the pain he felt was born from his own personal, individual experiences rather than merely the output of an algorithm." The counterpoint to that thought arrives in Act 3 Scene 1: "He didn't feel like his actions were coerced, but that was the problem with free will, even for humans. They were constrained by biological and chemical imperatives, too." The fact that robot Hamlet struggles with the same mysteries of the human condition as we do opens the way to the almost blasphemous idea that our most intimate anxieties would be true of anything capable of thinking. To say that robots are in any sense like us is to say that we are in some sense like robots.

Without the enormous intertextual weight of having picked one of the canonical classics, a robot retelling like this one wouldn't amount to more than an amusing curiosity, a mere exercise in transformative writing. But that judgment would miss the intent of what Wehm is really trying to do here. Many meanings have been read into the Hamlet tale: it can be about the tragedy of human choice, or about incompatible responsibilities, or waves of self-perpetuating violence, or the depths of betrayal, or the Scandinavian transition from Pagan to Christian notions of morality, or Oedipal neurosis, or cosmic justice, or cosmic indifference. Transplanting the story "as is," without changing any detail, into the subjectivity of an artificial person and letting the exact same events play out as we know they do, without dialing down the strength of the dramatic situation, is a more powerful literary statement than Wehm could have achieved if they had taken the simpler route of introducing variations in the plot. Rather than the literary retellings that show an unsuspected angle on a well-known story, Hamlet, Prince of Robots functions like the theatrical retellings of Shakespeare that still narrate the original story, but in a recontextualized presentation. Directors have set Macbeth in Haiti, Julius Caesar in wartime Germany, Coriolanus in revolutionary France. To set Hamlet in the age of post-industrial capitalism not only creates parallels worth discussing between royal power and corporate power, but also follows in the footsteps of a venerable theatrical tradition that keeps exploring the extent of Shakespeare's timeless versatility.