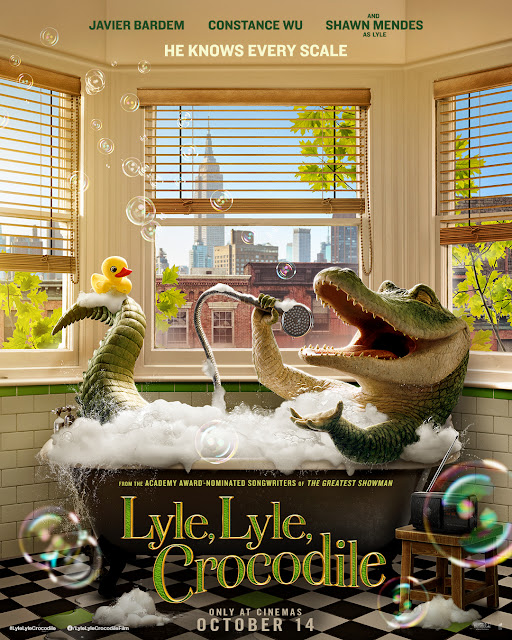 As a rule, book adaptations should be analyzed independently from the source material. A film should be able to stand on its own. However, Sony's new film Lyle, Lyle, Crocodile is so drastically different from the books it's based on that it's worth the exercise to identify the authorial choices that introduced plot points not present in the original story. By studying the new material that was added in the process of translating the books into this film, one can get a glimpse into the thought process that guided the production work.

In the original books written by American author Bernard Waber, Lyle the friendly crocodile forms a friendship with the Primm family after some initial misgivings about hosting a top predator in their house. Curiously, in the books, Lyle grows closest to Mrs. Primm, with whom he shares household chores and shopping trips. In the film, Lyle is closest to the son, Joshua, who is given a central but simple arc as part of a large metaphor about loosening up and embracing your wild side even in the asphalt jungle. This dynamic replicates a fossilized habit of American cinema: the kid-meets-monster plot. So Lyle and Joshua are isolated in their own bubble for a good portion of the movie, at the cost of losing the comedic incongruity of Lyle doing ordinary things in the ordinary world, as happens in the books.

The humor of book Lyle stems from the fact that he's a polite and well-behaved crocodile instead of the sewer crocodile of urban legends. He has the body of a human-eating beast, but he does the dishes and arranges the flowers in the house. That shocking contrast is the heart of the books' charm. It isn't even important that he can perform. On the contrary, Lyle's singing talent is the main attraction of the film, and, in many scenes, the only reason why humans stop fearing him. This diminishes the character of Lyle, reducing his right to be part of society to his usefulness as an entertainer.

Shifting the focus of the plot from Lyle's relationship with the city of New York to his singing career is yet another example of the homogenization of American cinema. It's a worrying display of lack of imagination that this film cannot make a case for Lyle's dignity apart from his exceptional (and exploitable) skills. In the books, Lyle is ultimately accepted in society because he's an intelligent creature that can make friends and express empathy; in the film, he's accepted in society because he wins a talent show.

The treatment of the antagonist, Mr. Grumps, is the best illustration of how this story was flattened for the screen. In the book, Mr. Grumps is an understandably concerned neighbor who only fears Lyle because he hasn't yet met him properly. When Lyle saves his life from a house fire, Mr. Grumps immediately sees that he had no reason to be afraid of him and becomes another of his friends. The underlying message is that Mr. Grumps was too hasty to judge Lyle, but he was mature enough to change his mind once he saw a demonstration of Lyle's kindness. In the film, Mr. Grumps is a one-note character who may as well have a neon sign painted on his face saying "bad person." Because US films have this anxious need to culminate in a victory over an opponent, Mr. Grumps is turned into a caricature that is only in the story to be defeated. Such deformation has repercussions beyond this character: in the books, Mr. Grumps's growth is contrasted with his earlier decision to have Lyle sent to the zoo; since the film doesn't reconcile him with Lyle, it's Mr. Valenti, Lyle's oldest friend, who sends him to the zoo, and the script does painful mental gymnastics to try to justify this choice.

The expanded characterization for the Primm family doesn't do the film many favors, either. This version of Joshua is the millionth timid child who finds his courage and saves the day after a near-fatal car chase. Mr. Primm is the millionth uptight adult who learns to channel his inner child. Mrs. Primm is the millionth mid-career professional who has an epiphany and reinvents herself. We've seen these stories before. They're the go-to stock characters with first-world problems in a standard children's movie. They're cinematic shorthand for the smallest amount of conflict that will still sustain a plot. They're a disservice to the source material.

Lyle, Lyle, Crocodile does the opposite of that. It takes a story with a unique sense of humor and turns it into every children's movie we've seen: a microcosm of the American Dream where all you need to do is pursue your ambitions until, with some luck, a TV contest changes your life. Book Lyle earns a place in the human world when he proves that, despite looking like a beast, he's just like a regular person. Film Lyle isn't allowed to live in peace until he proves he's exceptional. So this is an adaptation that not only fails to understand the story it's adapting, but also reinforces the laziest clichés of American cinema.

Penalties: −1 because movies seriously need to stop using asthma as a metaphor for a child's self-confidence issues.