Ghost Bird is a uniquely Australian young adult novel that examines the intersection between Indigenous and Western perspectives. 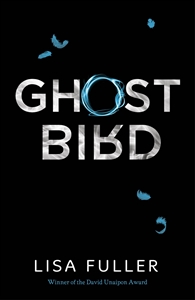 Ghost Bird belongs most comfortably in the genre of the YA thriller. A certain subsection of this genre likes to play coy about the presence of supernatural elements. Examples include Black by Fleur Ferris, Small Spaces by Sarah Epstein and Flight of the Fantail by Steph Matuku. By the end, each of these books definitively answers whether the speculative elements played with are considered real within the story’s world. Ghost Bird also has definitive answers, making it very at home in this subgenre. However, its identity as an Indigenous Australian Own Voices narrative makes it difficult to call the story a speculative one. After all, referring to what may be a part of a living Indigenous tradition as fantasy or speculative seems neither respectful nor accurate.

Cleverly, this tension between Western and Indigenous thought is one of the central themes of Ghost Bird. The story is written in first person present tense from the perspective of Stacey. She is intelligent, rational and takes her education very seriously -- too seriously, according to some of her family, who feel she should be paying more heed to traditional ways. However, the death of her grandmother left Stacey disillusioned with those teachings, and so at first she brushes off her dreams about her missing twin, Laney. After all, they’re probably just a product of her worried subconscious, right? And the secrecy with which her elders treat certain important information hinders Laney’s rescue, adding to Stacey’s frustration (and is much in keeping with the trope of useless adults in YA). It is up to her to do the research, interview the people and put together the clues. Thus, the dichotomy between Western rationalism and Indigenous teachings is not shown as a clear-cut matter, with both ways having their advantages and disadvantages. Ultimately, Stacey needs both to succeed.

Clearer cut are the lines of race that divide the town. The book is set in a small Queensland town with a long history of conflict between the Indigenous population and the white settlers. This conflict is shown in a number of ways throughout the story. Most obviously, certain extremely racist members of the township serve as the manifest villains of the piece. Laney goes missing after she and her boyfriend make a raid on their property and it’s not immediately clear whether this was due to the farmers or to something sinister living in the taboo caves on the corner of their property. These characters also represent a physical threat to Stacey and her friends as they go to investigate. However, racism is also present in less direct ways. The readers are shown the contrast in how the police handle missing persons cases based on race. We’re also told about the effective segregation in place at the local pub and even to some extent the town as a whole.

In addition to the conflict around race, we also get to witness the divisions in the Indigenous population of the town. Stacey’s family had been feuding with the Miller family since time out of memory. Which becomes a problem when Stacey suspects Mad May Miller has some understanding of what’s going on.

All of this conflict is balanced out with a large and affectionate family. Certainly, Stacey has her issues with both her sister and her mother, but they stem from a deep and genuine love and there’s nothing she wouldn’t do to protect them. We also get to see her relationship with her grandparents, full of small gestures that speak of love. And her cousin Rhiannon provides some much-needed company on Stacey’s adventures. In many ways, Rhiannon serves as a stand-in for the absent Laney, being close in both age and affection to Stacey. She also provides a boldness that Stacey lacks, inciting her to break the rules in ways Stacey might not otherwise have considered, thus moving the plot along.

There is the suggestion of romance present in the narrative, barely there by the standards of most YA. This light touch worked well, given the story’s strong focus on family. Other relationships took priority.

Since its publication, Ghost Bird has received some critical acclaim, winning the Norma K. Hemming Award for Long Work (alongside From Here On, Monsters by Elizabeth Bryer), the Queensland Literary Award’s Young Adult Book Award, the Readings Young Adult Book Prize, and receiving Honours from the Children’s Book Council of Australia. However, there are a few things that may mean some readers struggle to find it accessible.

Foremost among these is the time in which it’s set. This is not a contemporary story, but occurs back in 1999. This is a curious choice, but may have been made to circumvent the advent of mobile phones, making it more difficult for Stacey’s often absent mother to check up on her. It also relieves the need for the author to update the pop culture references made. While it may be very nostalgic for readers of a certain age to moon over Tupac or bop along to TLC’s Waterfall, it may also make it a little harder for a contemporary teenager to relate.

There’s a further stumbling block for non-Australian readers in the use of Australian dialect. Most of it is fairly easy to intuit, but there are one or two instances that may prove more arcane for some readers. Relatedly, a stylistic choice has been made to skip using apostrophes to denote abbreviations related to dialect, for example “Ya could always go and help im.” I found this lack a mercy, since their inclusion often makes for cluttered lines. However, I once again acknowledge it may make things more difficult for some readers.

This is not a book that tiptoes around delicate sensibilities. There’s plenty of swearing, a bit of violence, an attempted sexual assault on screen and the implication of domestic violence off it.

Despite all that, my final criticism of the story is that it is just a shade slow-paced in the middle. Stacey spends just a little too long waiting for news and not putting pieces together.

However, on the whole, it is a thoughtful and engaging work -- an excellent debut novel that I thoroughly enjoyed.

Bonuses: +2 for a nuanced view of Indigenous and Western perspectives, +1 for strong but complex family relationships,

Penalties: -1 a bit slow paced in the middle