Review: The Peacekeeper by B. L. Blanchard 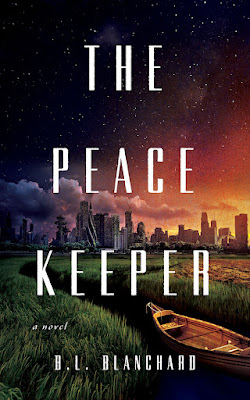 Introducing a speculative setting through a cop's perspective is a time-honored tradition. It's a practical choice for an author because describing police work involves describing the nuts and bolts that make a society function. In B. L. Blanchard's alternate history novel The Peacekeeper, we follow Chibenashi, a sort of police officer that is instead called peacekeeper in this world where European colonization never occurred and therefore the Native American peoples followed their own course of development until the time that we call the 21st century. Chibenashi's society, however, does not deal with crime the way we're used to seeing in conventional detective thrillers. The author uses the setting of a Native American-ruled society to illustrate what justice would be like if people didn't treat each other as adversaries. Rather than punishing, the purpose of justice in this world is restoration. Just as cops are called peacekeepers, judges are called mediators, and sentences are called resolutions. This is a society where the aggrieved do not seek victory, but harmony.

Little is explained about the background of this alternate world. We're just shown what it looks like now, without any infodumps about exactly why history took another course. That's fine. That's not really the point of the story. The setting (and the murder mystery) is simply an opportunity to expose how this legal system does its job. At times, the narration is so focused on the investigative work that it's easy to forget this is not happening in our world. However, the choice of setting is key to the core theme, because reparation is one of the hottest topics in the discussion about the situation of Native Americans in our real world.

The Peacekeeper makes a complex point about the purpose of reparations. The plot follows cases of individual victims, but the arguments can be extrapolated to the entire Native American community. After someone's whole world has been destroyed, the next stage is reconstruction, but things can never fully go back to the way they were. Restorative justice aims to preserve the human dignity of both the perpetrator and the victim, but it never loses sight of the impossibility of perfect reconstruction. Victims need to be brought as close as humanly possible to their initial condition. But the past must be acknowledged, must be honored. The pain that has been caused cannot be removed, nor should it. This view of justice is not concerned with settling scores, but with allowing everyone to move forward.

The manners of restorative justice are admirably detailed, even though the murder mystery itself isn't a very compelling one. The choice to end with a lengthy villain monologue and an inelegant last-minute rescue diminishes the merits that the novel otherwise deserves regarding worldbuilding and characterization.

There's already a sequel planned for next year, which will show us how Europe fares in a timeline where it never ruled over other lands. As a first look at a world without colonization, The Peacekeeper is more interesting in the big picture than in the personal lives of its characters. Fans of alternate history have much to appreciate in this innovative concept, but fans of detective novels may have a hard time adjusting to an unfamiliar set of assumptions about what law enforcement is meant to exist for.