A fun and food-focused comfort read. 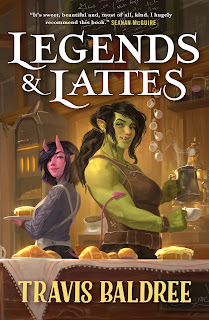 As Roseanna mentioned last month, cosy fantasy is becoming increasingly prevalent. Legends and Lattes is a perfect demonstration of the subgenre's popularity. First self-published in February 2022, it was so successful that Tor quickly picked it up and is rereleasing it this month -- a fast turnaround for a notoriously slow industry.

The story focuses on Viv, an orc adventurer ready for retirement. Her injuries are racking up (her lower back has particularly been playing up), she's tired of her coworkers (or one of them, anyway), and she has a new dream: to open a coffee shop. So, she comes to Thune, finds a decrepit hostelry just off the main street and gets to work. But renovating and running a coffee shop is a big job, and Viv can't do it on her own.

Unsurprisingly then (it's a cosy fantasy, after all), this is a book about found family. Viv slowly collects the people she needs to see her dream become a reality. She starts with Cal, a builder and craftsman who Viv recruits to help with the renovations. Being a hob, he's not exactly overrun with work, but he is well established and good at what he does. His surprised response to Viv's trust in him was a little bittersweet. In return, he provides Viv with a good foundation and her first friend in Thune.

Next is Tandri, a succubus who answers Viv's advertisement for an assistant on the very day it is posted. Practical, enthusiastic and whip-smart, Tandri gives the café her all from the get-go, constantly coming up with new ideas to bring in customers and help things run more smoothly. In Tandri, Viv finds not only an assistant but a business partner and maybe something more.

The rattkin Thimble is already a regular at the café when Viv starts looking for a baker. Like Cal, he's not much of a talker, but is keen to come on board if part of his wages include a steady supply of coffee. His delectable creations put Viv's café on the map... and will have you drooling as you read.

As may be obvious, this is very much a book centred around its characters. That said, we're not offered much in the way of backstory for them. It is enough to know that they are outsiders, for the most part. Because this is also a book about defying the expectations of society. As an orc, Viv is used to people watching her with distrust and expecting her to cause trouble or respond with violence. They don't expect her to become a neighbour or to serve food. Likewise, only fans of Ratatouille expect a ratkin to be a genius baker. Succubi like Tandri are supposed to exude sexuality, not to have a head for thaumaturgy.

Speaking of which, we get a modicum more backstory from Tandri to set the stage for a plotline involving a stalker. On the whole, I found this thread was pretty well handled. It was tame enough on the page not to interfere with the cosy vibe, but persistent enough for it to feel like a threat.

Balancing this characterisation of Tandri as not being defined by her sexuality with her romantic interest in Viv was also well handled. While it was a shade understated for my taste, it suited the story being told and is unlikely to send the romance adverse screaming in the other direction.

However, this general inversion of expectations doesn't always work. One place it felt a bit squishy was regarding the identity of the city's crime boss. I won't spoil that here; the reveal was fun and I rather enjoyed it. However, Viv's eventual arrangement with the Madrigal handwaves the fact that they remain a crime boss and by inference are causing harm to other parts of the community -- the same community that so heartwarmingly rallies around Viv when disaster does eventually strike.

The ending is perhaps a bit cliché, being very "the real treasure is the friends we made along the way," but that's to be expected of a cosy fantasy and works well in this context. Similarly, the beginning is a bit slow, being filled with details about the renovations and how to make coffee. That's not going to work for everyone, but does help set up a slice-of-life vibe that is part and parcel of the subgenre.

This is billed as a high fantasy with low stakes. While it is unquestionably high fantasy, I'm not entirely sure I can agree that it's low stakes. It's true that the world or even the city isn't facing peril, but what can be higher stakes than the death of someone's dream?

So, if  you're looking for a fun and somewhat food-focused comfort read (and who isn't, these days?) Legends and Lattes may be just the treat you need.

Penalties: - 1 for the Madrigal's cognitive dissonance