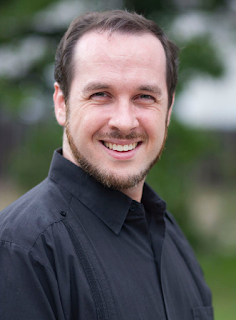 Marshall Ryan Maresca is a fantasy and science-fiction writer, author of the Maradaine Saga: Four braided series set amid the bustling streets and crime-ridden districts of the exotic city called Maradaine, which includes The Thorn of Dentonhill, A Murder of Mages, The Holver Alley Crew and The Way of the Shield, as well as the dieselpunk fantasy, The Velocity of Revolution. He is also the co-host of the Hugo-nominated, Stabby-winning podcast Worldbuilding for Masochists, and has been a playwright, an actor, a delivery driver and an amateur chef. He lives in Austin, Texas with his family.

This week sees the release of The Quarrygate Gambit, the fifteenth(!) book in the Maradaine Saga. So we decided to catch up with Marshall to talk all things Maradaine, and the ins and outs of writing a long-running, intertwined, multi-phase series: 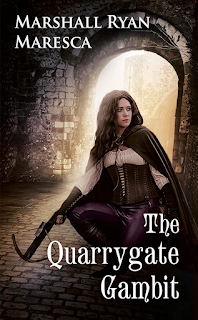 NoaF: Hi Marshall! Let’s start by talking about the world of Maradaine, and the city where the saga takes place. What sort of fantasy city are we talking about here?

MrM: Hi!  So, Maradaine is a sprawling metropolis, the capital city of Druthal, and while most of the population is Druth, it is a cosmopolitan city with residents from all parts of the world.  It’s got dozens of neighborhoods, from the centers of government power on the north side near the Parliament, to the central downtown of Inemar, from the working-class neighborhoods of Aventil and Dentonhill, to the poor west side neighborhoods like Seleth and Benson Court.  It’s a city teeming with people, teeming with stories, which makes it incredibly fun to write in.

NoaF: You’re fifteen books deep into Maradaine now, in phase two of a planned three phases, and one of the most intriguing things about it is how it’s split into four subseries, each following a different group of characters within the city. Can you tell us a bit more about each subseries?

MRM: Yes!  First we’ve got The Thorn of Maradaine series (originally just called the Novels of Maradaine), starting with The Thorn of Dentonhill, which follows Veranix Calbert, a magic student by day, vigilante by night, fighting his personal war against a drug lord crime boss.

Next, the Maradaine Constabulary, the police procedural series, starting with A Murder of Mages, which focuses on Satrine Rainey—former spy and street rat, now working as an inspector in the constabulary to support her family, partnered with Minox Welling, an untrained mage who is a brilliant investigator but very disliked in the force, as they solve bizarre cases, usually involving magic or other impossible situations.

Third is the Streets of Maradaine, the crime/heist series, starting with The Holver Alley Crew.  Here we focus on the Rynax brothers, Asti & Verci: former thieves who had decided to go legitimate and open their own shop.  But their home and shop are destroyed in a fire, so they have to go back to pulling jobs for the local crime boss to make ends meet. They put together a crew from other victims of the fire, and then learn about why the fire started in the first place, which drives them from just a heist plan to revenge.

Fourth (and not quite last) is the Maradaine Elite, starting with The Way of the Shield, where we follow Dayne Heldrin and Jerinne Fendall, hopeful members of the Tarian Order, as they find themselves embroiled in the political machinations of people far above them in the nation’s power structure.

NoaF: It must take a lot of work to plot out an overarching story through four interconnected series. How do you go about plotting for Maradaine – do you plan things well in advance, or do you allow connections to grow as you’re writing individual parts in the story?

MRM: It's absolutely a combination of the two: I have a complete outline of all three phases of the Maradaine Saga, what happens in each book, and the entire saga as a whole.  But the outline HAS to be a living document, because things constantly grow their own way when I’m in the writing process, and so I regularly go back to the outline to rework it with those new ideas.  For example, in any given book, a character can unexpectedly shine, and so the outlines need to evolve to include how that character works in the whole plan.  But at the same time, I don’t want to let the whole thing get away from me, and so the structure of the outline needs to stay together.  I don’t want to be doing the thing of, “I said this subseries was five books, and actually it’s going to be seven.”  There’s enough going on already.

NoaF: How different are the subseries stylistically? Are there parts of the series that you find easier, or more challenging, to write and how do you go about getting into the vibe for each different book?

MRM: They definitely each have a different vibe, which is tied entirely to the voice of each main characters.  Though, one advantage of writing this saga this way, with the different series having different styles and voices, is they never become stale for me.  If I just wrote four Streets of Maradaine straight through, I’d probably be bored with writing Asti & Verci, but since there had been other things in between each one, coming back to each series is like meeting up and old friend and immediately finding the same rhythm you always had with them.

NoaF: You’ve described your latest book Quarrygate Gambit (fourth in the Streets of Maradaine subseries) as equal parts Ocean’s Eight, The Great Escape, and The Suicide Squad. When it comes to fantasy heists, what aspects do you most enjoy?

MRM: One of the things I love about heists is how you can set up expectations, and with that comes structure, since so much of the heist idea is tied to plans.  So you can lay out an entire, “So, this is how it’s going to go”, and your reader will know—this is not how it’s going to go—and then the fun for them is watching the dominoes fall down. 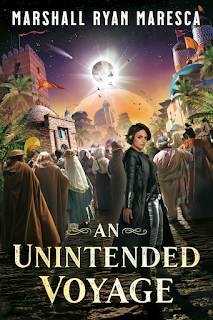 NoaF: Are there any parts of Maradaine that you wish you were able to spend more time on – or any characters we should be paying more attention to in future books?

Well, that was one of those “the outline got away from me” things—I had so much fun writing Corrie Welling in the Maradaine Constabulary series, that I ended up writing an entire separate book for her with An Unintended Voyage.  The title was apt, that was not part of the original plan at all!  As for characters to pay more attention to in the future, I’d direct readers to Sister Myriem, who we’d been seeing snippets of in Phase One, and who will be engaged in the larger plot of the Phase Two novels in interesting ways.

NoaF: Finally, the million dollar question: where should people start with Maradaine? Can people pick up the first in the subseries that most speaks to them – and what order makes most sense for the series as a whole?

MRM: I mean, when pressed, I will always advise folks to read all the books.  But, absolutely, each subseries is designed to work on its own, so if one is most interested in the Streets series for the heists, or Constabulary for the police procedural, starting with the first of any of the series can work.

BUT, I absolutely want everyone to read the whole saga.  And to do that, release order is a perfectly good order to read it in.  But, I would advocate for an in-world chronological, which is a little different:

There are also a handful of shorts coming, the first of which, The Mystical Murders of Yin Mara, won’t fit in cleanly in terms of chronology. But Mystical Murders can be read at any point after Imposters.

NoaF: Fantastic – thanks for your time, Marshall!

MRM: Thank you so much!  Happy reading!