Microreview [book]: No Gods, No Monsters by Cadwell Turnbull

A tightly plotted iteration on the mosaic novel, which grapples powerfully with questions of solidarity and justice 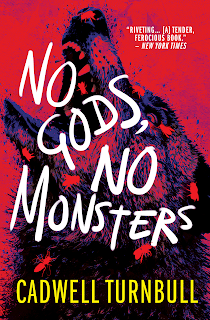 First up, if you're in the US (or you get your books from there), both the timing of this review and the cover above might be a bit confusing. That's because No Gods, No Monsters, released in 2021 in the US and Canada, is getting a UK release later this month thanks to Titan Books. I want to point that out specifically because Titan do an excellent and underrated job bringing books to the UK that otherwise would not be released here - some of their other authors include T. Kingfisher and Stephen Graham Jones. Thanks, Titan, for your services to transatlantic book availability.

And if we in the UK had to wait an extra year and change to buy this title on the shelves here? Well, that wait was absolutely worth it, because this is quite the book. No Gods, No Monsters circles around a broad group of characters the events immediately leading up to, and following, the public reveal that monsters have been living alongside humans in society all along, from shifters to witches to more unsettling powers. Split into lots of short sections, this is basically a "mosaic novel" (see here for more examples of the form), except that Turnbull's plot circles back to focus on the same characters and viewpoints more regularly than I would associate with the term, creating a central plot that feels tight and microcosmic even as it brings together a whole range of viewpoints. Throw in some non linearity and time shenanigans and a unifying narrator who only plays a minor role in the plot itself, but has his own story to tell (eventually), and you've got a novel that feels held together by its overlapping characters, as they face off against increasingly terrifying and mysterious forces.

There are a couple of points of convergence within this structure. The main one is around Laina and her partner Ridley, both workers at a cooperative bookstore. Laina's estranged brother becomes the catalyst for the reveal of monsters when he is shot and killed by Boston police, and Laina receives video that shows him attacking the officer as a werewolf at the moment of the shooting. Despite this video, and a protest by other members of Lincoln's pack in which they shift in front of camera, the public evidence for the existence of monsters is quickly deleted from the public eye, and becomes the subject of debate as people decide whether to believe that 1. monsters are real and 2. there is a giant conspiracy to cover them up, or to deny the evidence of their own eyes in favour of the status quo. Laina begins a  relationship with Rebecca, a member of Lincoln's old wolfpack, and the existence of monsters becomes a known part of her life; for Ridley, the journey to acceptance is longer and involves a more dangerous encounter with forces opposing the protagonist community. It's through Laina and Ridley that No Gods, No Monsters explores the question of solidarity and community organisation, and whether either concept can be applied to a community which remains hidden for its own safety. It's interesting to watch this struggle play out against a leftist cooperative movement, rather than among a more politically apathetic set of characters, and the parallels to marginalised - especially multiply marginalised - folks trying to get involved in left wing politics in our own world are obvious and important.

The other point of convergence is around a secret society, the Order of the Zsouvox, and the people working in direct opposition to it. We don't spend much time with the Order itself, encountering it at first from a complete outsider's perspective and learning some small additional details from a young escapee. Instead, the Order and the malicious force it seems to represent casts a shadow over everything else that happens, and in practice its actions serve to disrupt any community building that the protagonist characters try to engage in, even though this seems to be in service of an unknown larger goal rather than an end in itself. The characters opposing the Order include Sondra, a St Thomian Senator, her invisible sister Sonya, and nonbinary tech wizard Melku; all three have impressive powers which are even more impressively (and terrifyingly) countered by their enemies.

No Gods, No Monsters is the start of a trilogy, and it's only the first of those two plots that gets a satisfying resolution here. Laina, Ridley and Rebecca's journey towards solidarity and mutual understanding is a painful and grief-stricken one, but ultimately, it adds up to something that feels tentatively hopeful about the future for these characters and for the state of humanity. When it comes to the Order of the Zsouvox and what might come next in the broader struggle, things are left much more open, and despite the reappearance of one of the book's most compelling early characters, I didn't get much closure or catharsis over these plot strands. I feel like I'm in safe hands for the rest of this trilogy (the Convergence Saga), and regardless of which individual characters return for a second and third book, I'm highly invested in the world which Turnbull has created here and the fight between the forces seeking to control it.