It was the wrong call to age up Wednesday Addams 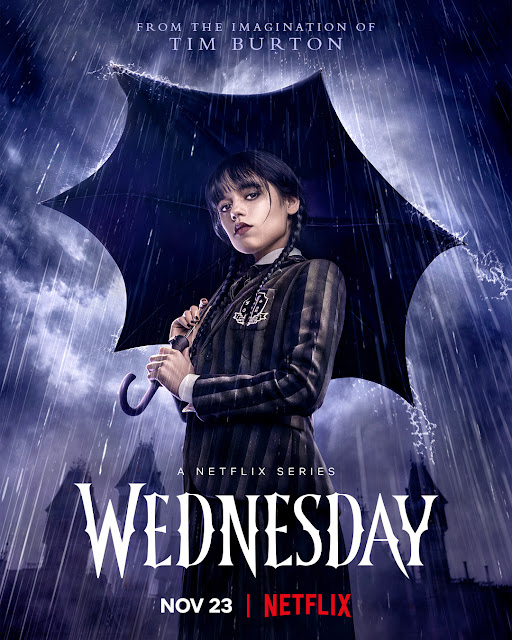 Tim Burton has only ever told one story: the outsider misunderstood by the world. This lifelong obsession has sometimes given spectacular results (Beetlejuice, Batman 1 and 2, Big Fish), and, at other times, regrettable embarrassments (Planet of the Apes, Charlie and the Chocolate Factory, Alice in Wonderland). So every time he announces a new project, the gods of art play Russian roulette. His new Netflix series, Addams Family spinoff Wednesday, is, much like Burton himself, an acquired taste. Like all acquired tastes, it demands a willingness for masochism. Imagine a chronically sedated Sabrina Spellman shambling confusedly into the nonstop glitter fashion gala of Monster High and you'll get an idea of the fundamental problem with Wednesday. Some stories succeed at straddling tonal ambiguity; this one ties narrative tone to a rack and mercilessly turns the pulley until it snaps.

Expectations were always going to be unfairly high for this series. In the 1990s, Christina Ricci set the absolute platinum standard for the role without breaking a sweat. This new version has found a talented performer in Jenna Ortega, whose perfectly timed microexpressions reveal just the right hint of vulnerability behind Wednesday's mask of aloofness, but she's been given bland, repetitive lines that quickly get exhausting and put the comedy in the wrong place. We're supposed to be moved to laughter by Wednesday, not at her.

A character like Wednesday needs to be handled like Marvin the Paranoid Android: it's best enjoyed in moderation. The film version was an alarmingly jaded child whose brand of humor worked so well because it was the pinch of spice in a varied recipe. Here, as the main entry, it's indigestible, all the more so because this Wednesday is almost a grown-up, but her characterization didn't mature accordingly. The absurdist glee of watching a 10-year-old play with knives is broken when it's a 16-year old doing it. Suspension of disbelief is a rebellious bird, especially in fantasy, and a hundred times more when the fantasy is set in our world. The same lines that caused a blend of shock and delight when delivered in the innocent-sounding voice of a child cause annoyance when heard in a monotone from an edgy teen who discovered goth four decades late and made it her sole personality trait.

This misfire in characterization extends to Wednesday's choices, which invariably clash with her peers' attempts at contact. In the films, Wednesday was never surprised by her emotions. She was fully at home in her dark psyche. Sure, she was a sociopath, but she was self-aware enough to tell when loyalty mattered. Netflix Wednesday is a sociopath, period. She's so busy denying her emotions that she fails to notice she's controlled by them. She accuses those closest to her of outrageous acts of manipulation while engaging in Olympic-level manipulation herself. In her quest to solve a series of murders and, of course, prove everyone else wrong, she never realizes that her own inflated ego is the biggest obstacle.

Wednesday works better when it's a detective story than when it's an angsty soap opera, which is a pity, because the mystery ceases to be mysterious halfway through the season, and the teen drama is Riverdale levels of insufferable. The script relies on so many clichés that by the middle of the second episode the viewer has effectively received an accelerated course in snarky comebacks. It must be admitted that the writing quality improves considerably in the episodes not written by the Gough-Millar duo. (Why on Earth would you entrust this franchise to the creators of Smallville, who also happen to be the same guys who sincerely believed The Sword of Shannara could ever be adapted into something decent?) In particular, writer Kayla Alpert does an admirable job with her scripts for episodes 3 and 4. However, the show is generally more interested in aesthetic than substance.

John Scalzi has described this show as "Spooky Daria Goes to Gothwarts," and that would suffice as a review. However, it's important to delve into why Wednesday doesn't work. Let's make an effort to suspend disbelief and forget about the most blatantly broken parts. Let's forget for a moment that you can't hurt swimmers by dropping piranhas in the pool because chlorinated water gives fish blood poisoning. Let's forget that Nevermore Academy has so many special day events that basically no studying ever happens. Let's forget that the Nightshades super-hidden room loses all its aura of secrecy and becomes a regular hangout spot like the town cafeteria. Let's forget the extraordinarily offensive portrayal of mental illness. What, exactly, is missing in this formula?

The key to the humor of the Addams depends on the contrast between their weird customs and "respectable" society. The fact that the series presents a "Nancy Reagan High School," only to throw it away before the opening credits of the first episode, shows how much the creators missed the clear opportunity of showing Wednesday where she would stand out the most. Instead, they dilute her uniqueness by putting her in a whole school of monsters, but at the same time dilute the monsters because otherwise they'd outshine her. We're expected to just believe that the place houses hundreds of vampires, werewolves and assorted magical misfits, but we get to see almost none of that.

Another crime worth noting is the waste of such great actresses as Gwendoline Christie and Catherine Zeta-Jones. As the school headmistress, Christie looks adequately professional and in control, but the routine of the responsible adult exasperated by the meddling kid gets old very fast. For her part, Zeta-Jones is exquisite as always, but the character of Morticia is properly defined by a mischievous joie de vivre that is nowhere to be seen here. Mercifully, Christina Ricci is given a part worthy of her acting powers, and it's a treat to watch her channel Goldie Hawn in Death Becomes Her with such uncanny ease.

The problem with Wednesday is that it commits the cardinal sin of trying to be cool but obviously trying too hard. It's only saved by the murder mystery, which provides enough misdirections and credible suspects to maintain interest, but that is a plot that didn't have a reason to happen in the Addams world. The Addams Family requires a fine-tuned ear for dark comedy, an elusive lightning that has only struck twice. This attempt feels like yet another generic magical school filled with horny teenagers, with the aggravating factor that a severed hand manages to express more emotion than the protagonist's resting bored face. We're constantly told that this family likes macabre games, but in the end, the only one being tortured is the viewer.

Bonuses: +1 for Danny Elfman and Chris Bacon's music, +1 for a well-designed murder mystery, +10 because it's always a joy to watch Catherine Zeta-Jones in anything.

Penalties: −1 for dull dialogue, −1 for wasting literal hundreds of monstrous characters we never see being monstrous, −1 because the makeup for Zeta-Jones is far too lazy, −10 because it's past time horror stories stopped taking so many liberties with mental illness.