Zootopia+ expands on the secondary characters from the movie 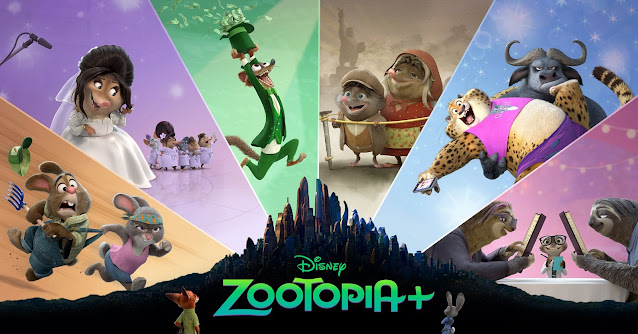 Since 2016, we've been wishing for a sequel to Zootopia. The concept of a prosperous city where all kinds of animals live together in peace is endlessly fertile with story material, which makes it odd that it hadn't sparked its own franchise until now. Just over the past couple of years, Disney+ has streamed Monsters at Work, Olaf Presents, Baymax!, Cars on the Road and Forky Asks a Question. It was well past time to revisit Zootopia. If we can't have a second movie, this series of shorts is the next best thing.

Zootopia+ is composed of six episodes, ranging between 7 and 9 minutes in length, that expand on the lives of secondary characters from the 2016 film. These episodes are arranged in chronological order to match each character's appearance in the story. This narrative device has the advantage of satisfying the curiosity of viewers who were left hungry for more time with characters who hadn't been given enough focus, and the disadvantage of limiting itself to the events of the original film, as if reinforcing the suspicion that there aren't more stories to tell in that setting.

Hopp on Board follows the parents of Judy Hopp right after she left her hometown for the big city. This episode is a breakneck chase that confronts the Hopps with the realization that their daughter was right: life outside Bunnyburrow can be fun and exciting.

The Real Rodents of Little Rodentia is a parody of reality TV, complete with stressful wedding planning and bridesmaid jealousy, centered on the ostensibly mafialike family of Fru-Fru the shrew, who after a close brush with death decides she doesn't need so much drama in her life.

Duke: The Musical is a jaw-droppingly bleak episode, disguised as an absurdly over-the-top monologue sung by the small-time thief Duke Weaselton, a man apparently fated to stay broke the rest of his life.

The Godfather of the Bride continues from where we left Fru-Fru, whose father takes a moment at her wedding party to answer the biggest lingering question from Zootopia: how on Earth did a tiny rodent climb the ladder of power and become a mob boss? Turns out he made the right friends and replaced a band of bullies with one of bigger bullies.

So You Think You Can Prance puts the spotlight on the cheerful and soft-hearted Officer Clawhauser, who briefly gets to indulge his dream of sharing a stage with the superstar Gazelle, and in the process reveals an unseen side of his boss, Chief Bogo.

Dinner Rush is a simple but effective comedy sketch about a restaurant waitress struggling to finish her shift in time when the sloth Flash brings his girlfriend for a painfully slow date. This episode leads directly to the ending scene of the movie, where our protagonist Judy stops the same sloth for speeding.

With regard to comedy, this series fulfills its mission easily. The animators at Disney know their art, and here they showcase their ability to provoke laughter with simultaneous layers of slapstick, parody, innuendo, absurdism, hyperbole and expertly timed rug-pulling.

However, as a broader look into the world of Zootopia, we get very little. A second season, if it ever comes to pass, needs to unshackle itself from the timeline of the film and go deeper into the dynamics of this extremely diverse and complex society. The original Zootopia was good comedy, but it was better social commentary, and that's where this setting can truly shine. For the time being, these animated shorts will have to suffice.