In Reminiscence, nostalgia is a sweet poison

There are layers of warning in the movie's mantra, "it's us who haunt the past" 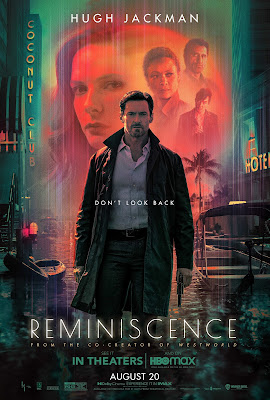 It is a cruel irony that the way Reminiscence will be remembered will probably focus on the accusation that it redoes earlier movies. Yes, it brings to mind Total Recall and The Cell. Yes, one of its producers is the writer of Memento. Yes, it draws from decades of noir detective tradition. But Reminiscence uses these callbacks with a very deliberate intention. It's not just about "hey, do you remember when that other movie played with memory?" or "do you remember when that other movie had a jaded detective trying to save his girlfriend?" or "let me remind you of all these movies that also had global warming." It's more about "be careful with how you budget your attention, because bigger things are happening than you currently bother to look at."

In the future shown in Reminiscence, the seas have risen and swallowed coastal cities around the world. Via shady real estate tactics, the super rich have retreated to high ground while the rest are left to sink or swim in flooded slums. International war has come and gone, and what remains is a hopeless people whose main form of entertainment is to close their eyes in a water tank and relive their best memories.

This choice of worldbuilding throws a punch you don't see coming: it's literally set in our future, but its inhabitants don't believe there's a future. They'd rather retreat to a better time, which from their position would correspond to our time. But if we take an honest look at ourselves, we have to admit we're guilty of the same vice. The most heated discussion happening right now in 21st century media revolves around our unhealthy obsession with revisiting the media of our childhood. What Reminiscence invites you to do is to see the problem from the other end of the equation. It's difficult to grasp the corrosive effect of nostalgia until you see the people of the future do it to you.

Dreaming of an idealized past while the world breaks down around you is almost a too perfect metaphor for life during a pandemic. But the movie includes a few twists that make the viewer rethink what the metaphor is saying. The machine that extracts memories turns them into movies that can be watched, replayed, and rewound at leisure. Instead of the uniquely personal aggregation of sensations that we understand as memories, they're treated as already edited and polished for public viewing.

The rules of memory travel make it clear that focusing on the past too much can render you permanently stuck, incapable of perceiving the present. This can be read as a way of representing the risks of untreated PTSD flashbacks, which fits the plot on the most literal level because many of its lead characters are war veterans, but the fact that it can also be read as a symbolic mirror for our media consumption habits raises a necessary question to complete the analogy: is our nostalgic binge caused by collective trauma, by a real present that is too painful to experience directly?

We are a generation statistically predicted to have a worse economic future than our parents. The effects of global warming are all around us while our elected leaders sit on their hands. Rabid nationalism is showing its ugly head on the open, and inequality is only growing more obscene. No wonder we're exhausted all the time. No wonder many of us feel we've had too much of reality. No wonder we spend our days tuning in to reruns of Friends and getting mad when Star Wars dares attempt something different. We take refuge in comforting memories because life is just too much, but that doesn't stop life from going on, and awful things are going on while we complete our binge rewatch.

This is why it's no accident that Reminiscence interweaves its personal-level drama with a larger plot about societal unrest brewing beneath the surface. As the protagonist chases clues, trying to make sense of a lost love he refuses to let go, we follow him across the semisubmerged ruins of what used to be Miami. The former luxury destination for young vacationers has become a dilapidated abode of climate refugees. The Sunshine State has switched to a nocturnal work schedule because the heat of the day is unlivable. Only the 1% get to make plans for their descendants. In Reminiscence, the future is closed off by design.

The ending has our hero expose the corruption of a rich landowner family, and thus we get brief glimpses of an imminent revolution, but we don't see how it ends. This is a protagonist who doesn't believe in happy endings, and the destination he chooses for his journey is a loop reel of his life's greatest hits. But it's not obvious that the movie as a whole shares this stance. It's precisely by the hero's refusal to let go of the past that he ends up unmasking a conspiracy of lies and giving his community the push to fight back against evildoers. But he shares no part in the reward for his obsession. He's the hero of the story, but he's not a model that the movie offers for us to follow. He's a perpetually doomed Orpheus, always descending into hell to rescue his Eurydice, always paying for the sin of looking back. How the rest of society rearranges itself into a better shape is left for us to imagine.

A recurrent motif in this movie is the need to choose where to end a story before it gets too sad. That's the protagonist's excuse for his final choice of permanent disconnection from the world. But ending a story in the middle won't do if we are to build a future. The advice to end a story at the middle is seductive, but poisonous. We are at the middle of our historic trajectory, and the worst thing we could do is stop right where we are. Even if we were to agree that all endings are sad, the answer cannot be to refuse to let our journey continue. If all endings are sad, the answer is to continue for as long as we have strength to go on. This is the alternate road that our hero fails to see, and that's his curse. But the future he lives in is only a possibility, one of many, when seen from where we stand. The rest of us still have the option to take our eyes out of our cozy recollections, look forward, and take a less horrible road.

Bonuses: +1 for the gust of fresh air that is the visual language of brutal violence viewed through the lens of a female director, +1 for Thandiwe Newton's acting, +1 for some shining gems of dialogue ("people like us don't fall in love [...] love is the thing we climb to").

Penalties: −1 for incomplete worldbuilding, −1 for relying too much on voiceover exposition, −1 for too many neat plot coincidences, −1 for ending the social side of the story in the middle.