It is September and 2021 is rapidly working its way to the end along with the grand Bad Idea Comics experiment.  While I have heard that the burden placed on comic book retailers was difficult, from a reader's perspective I have thoroughly enjoyed the Bad Idea ride and have been fortunate to find ways of obtaining these amazing books online. 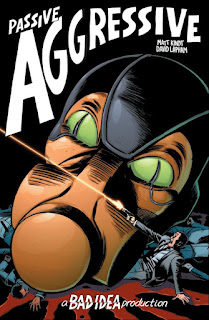 In July Bad Idea announced that readers could prepay for its Final Five books in hoping to obtain an exclusive sticker that would grant them special powers.  This past month it was revealed that it has to do with the Hero Trade Passive/Aggressive.  If you recall, Bad Idea sent Hero Trade ashcans to comic book stores with no information that it related to Bad Idea or was from the all-star team of Matt Kindt and David Lapham.  This built buzz around the title, and it wasn't until readers picked up their copy of Hero Trade Passive/Aggressive that they learned it is actually two titles, and that their local book store only got one.  Stores either received the Passive or Aggressive books, and readers were left scrambling to pick up the other title.  If you were lucky enough to get a golden sticker, you had the option to redeem it for the other title.

I was fortunate enough to get a golden sticker and it felt a bit like ordering something from the back of a comic book back in the day.  I sent my money order and address and will be waiting until my copy of Passive arrives in the mail.  Readers were mixed on this approach, but sales quickly went up on eBay and it created the typical buzz that Bad Idea has received throughout their journey.  Whether it was clicking a button a billion times, secret ashcans, or announcing that this grand experiment truly is over this year, Bad Idea may have lived up to its name, but if you were lucky enough to pick up some of the books you were treated to some impressive titles. 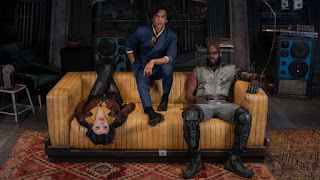 While not related to comic books per say, the internet was abuzz last week when Netflix released some of the first images from its upcoming live action adaptation of Cowboy Bebop.  When John Cho was announced as Spike I had a good feeling that Netflix might be able to pull this off and felt reassured when the early images were released. While it still seems odd to make a live action remake of a series that is nearly perfect, I am hoping that it will bring a larger audience to this amazing series and look forward to checking it out.  Ed is very absent from the early images and I am hopeful that they will remain an integral character, but they stated that this is an adaptation and not a shot-for-shot remake so only time will tell.