The first full length novel in the “Velocity Wrachant” 'verse plunges its characters into messy politics that they would rather have left in the rear view mirror. 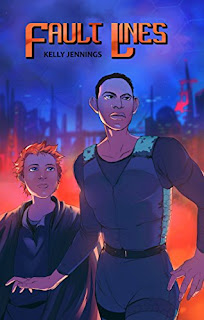 Captain Velocity Wrachant has a problem and it is, quite bluntly, a cash flow problem. She doesn’t have enough money for dock fees, or fuel costs, or the payments to  liens on her ship. This is a most serious problem, as she can’t get the ship out of the station where it is docked, and if she can’t pay the docking fees, the Susan Calvin might well be seized.  This is intolerable and a desperate situation.

So when the young  Brontë offers a staggering sum of money to transport her and her Security Guard to Hokkaido station, even given the issues with such a request (why doesn’t she just take commercial transportation, in luxury?). Velocity has little choice but to accept the job. But when Brontë moves to hijack the Susan Calvin midlight, Velocity learns quickly of the lies and deceptions that her passenger has in her past, present and future. Worse still for her and her crew, Velocity will have to confront her own past in the House dominated Combines as well.

This is the story of Kelly Jennings Fault Lines, a full length novel set in her “Velocity’s Ghost” universe, as seen in the Athena Andreadis 2013 anthology The Other Half of the Sky.

Like that original story, and like the other stories in that anthology by other authors, the central characters in the universe that Jennings has constructed here and the central characters are women (and note the name of Velocity’s ship). Given the preponderance of men as leads of a lot of space opera to this day, Jennings' work is a refreshing rebalancing of that. The novel is a two-hander, with Velocity Wrachant, captain and owner of the Susan Calvin, and Brontë, a young woman who is far more than she first appears.

The story’s point of view focus on both Velocity and Brontë, although we do not see the latter's point of view until her hijacking, and even then, it is initially months in the past. I didn’t like her at first: after all, she HAD hijacked Velocity’s ship, and I thought at first that the flashbacks from her point of view were merely to flesh her out and give us perspective and point of view to sympathize with her, however grudgingly so. As the back half of the narrative continued to build and events in the present continued, I saw the careful crafting of plot, and the central mystery at the heart of Fault Lines.  Brontë is on the run from her Combine House, but how, and why and who precipitated those actions and those machinations is a slow burn through the novel as Velocity, Brontë and others try and figure out a deadly game of politics, inheritance, and survival. The backstory of Brontë did win me over, helping me to understand her motivations for her hijacking as the desperate act that it turns out to be. I think, though, the sympathy for her plight could have been done a bit better.

I had, frankly, only dimly remembered Velocity’s own connection to the Combines (as outlined in “Velocity’s Ghost”) and it appears the author does count on the reader not having to have read the story, because it is treated here as a major reveal that shakes up the game board. It’s an interesting balancing act: readers of that story have a key piece of  knowledge that the narrative of this novel doesn't otherwise make plain. Jennings is careful to make sure the reader sees there is something there, and I think that one can deduce the reveal without having read the story.

I should make it clear that this is not a space opera with a ton of action scenes in it. This is a novel far more interested in the political machinations, maneuvers, conversations, revelations and negotiations than in straight up conflicts. If you prefer your space opera with more laser guns and less wrangling, this is not quite the space opera you are looking for. On the other hand, if you want deadly dances of interstellar politics, this novel, this universe, has all you could want, in spades, and will eat up what is offered here with as poon.

It is the worldbuilding and the characters within it that really stand out here. The focus on the technology is much less on hardware and more on software, and on biological wetware. This is not the kind of novel where burn times for a fusion reactor drive are of major interest, but gene lines, genetic engineering and computer system infiltration definitively are. I’ve seen comparisons to Cherryh’s Cyteen in this regard, and I can definitely see that. It’s not quite the “dump in the deep end” that Cyteen does, however. Jennings’ introduction to the universe is much gentler, and the use of the aforementioned flashbacks helps in that regard. At first it is just this Captain, this ship and the greater problems of the universe and its aspects come in a more gradual fashion. However, the Azi from Cyteen definitely have an analogue here in the Ikan16’s. There are deeper parallels, too, that I will leave readers to discover as well.

Velocity and Brontë definitely outshine the other characters on all sides of the conflict. We really see into their minds and motivations to the point that Velocity’s crew and Brontë’s allies, and both of their enemies suffer a little bit by comparison. This is not to say that they are not well drawn, but they come off a little less three dimensional than the lead pair. I mentioned this novel was a “Two-hander” and it really is. This may also be a consequence of the parallels between the two characters and so how they reflect off of each other so brightly.

The other novel that this all reminds me of, with spacefaring Houses, genetic manipulation, breeding and machinations between and within Houses, is of course, Dune. There is even a trans-House political organization which is not the Bene Gesserit, but clearly has goals and desires which transcend Houses and generations of time. But unlike Dune and more like Cyteen, there is a lack of that fear of technology that the Dune 'verse features. There are sociological and social taboos in this universe every bit as strong as those in Dune, but they are oriented in different directions. Jennings has borrowed from Dune, and Cyteen, and original ideas and worldbuilding in spades to make a fractally complicated and lived-in universe that feels real and lived in.

Fault Lines is a rich space opera with a canvas and characters that scream for more stories and novels. From what I hear, too, I will get my wish in that regard.  To be clear again, I don’t think you need to hunt down “Velocity’s Ghost” In The Other Half of the Sky (although it is a very good anthology and worth reading on its own merits) in order to read this novel and get on board Velocity’s ship.

Bonuses: +1 for crunchy political machinations and plotting, for those who like that sort of jam.

Penalties: -1 It took significant time for me to warm to one of the two main characters (Brontë)