The Novella Initiative: The Flowers of Vashnoi by Lois McMaster Bujold 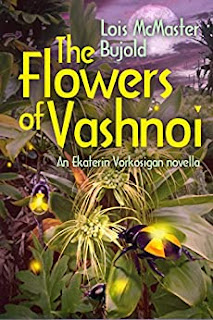 Still new to her duties as Lady Vorkosigan, Ekaterin is working together with expatriate scientist Enrique Borgos on a radical scheme to recover the lands of the Vashnoi exclusion zone, a lingering radioactive legacy of the Cetagandan invasion of the planet Barrayar. When Enrique’s experimental bioengineered creatures go missing, the pair discover that the zone still conceals deadly old secrets.

The latterly novels and stories in the Miles Vorkosigan sequence have been moving away from Miles as primary narrator or even primary character, and The Flowers of Vashnoi continues that trend. Here, Miles’ wife Ekaterin takes the primary point of view and takes lead and point of view of the narrative as she and her  team work on a project on the edge of a still radioactive zone, while Miles is mostly wrapped up in city politics.

As this is a relatively late story in the sequence, a big part of this novella is all about the resonances with other stories, and other themes in the whole Vorkosigan sequence. The most direct resonance is with A Civil Campaign, where we first met Enrique, and we also meet the original iteration of the “butter bugs” which are the aforementioned bioengineered creatures being used experimentally to hasten the decontamination of the land.

The second resonance is with another non-Miles story, and that is Captain Vorpatril’s Alliance. (The novella takes place just after that novel for those trying to fix it in time)  That novel, while initially focusing on Ivan and some offworld adventures, does in the end bring him home, and he does wind up confronting legacies of the invasion of the Cetagandans. The entirety of the Exclusion Zone IS a legacy of that invasion both for Barrayar in general and for the Vorkosigan family in particular. We get a little more, too, about Miles and his Grandfather’s Piotr’s relationship here, which enriches the narrative, again, for readers of the entire sequence.

The last resonance for this novella, and I think it is absolutely deliberate on the author’s part to mirror the story in terms of plot elements, is to a story very early written in the Vorkosigan sequence, “The Mountains of Mourning” . In that novella, a young Miles goes into similar terrain and country and faces a problem that if not exactly the same as Ekaterin faces here mainly on her own, certainly resonates and rhymes with it. I think this is a deliberate strategy, and this novella then works on the level of showing how much Barrayar, especially outside of the booming cities, has changed in a couple of decades.  And, of course, how much it is certainly not changed as well.

Given those resonances being much of what makes this novella work, and given that the depiction and portrayal of Ekaterin very much depends on having read Komarr and A Civil Campaign, this is a novella that I think is very strictly for the fans, but the fans will be delighted by it.