Luscious prose and compelling character dynamics abound, but The All-Consuming World struggles to deliver on the promise of its worldbuilding 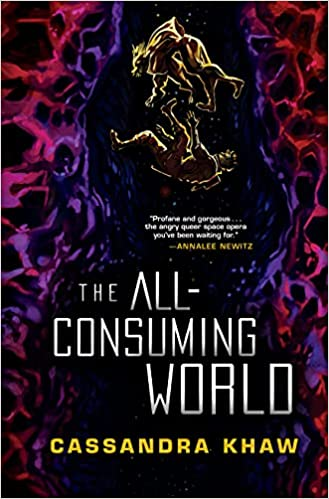 There's only one sentence that can open this review: What the fuck just happened?

The All-Consuming World is Cassandra Khaw's debut novel, and it's a blend of ultraviolent action and post-human space opera that races by in a blur of dramatic heist-y tropes and ornate-but-sweary prose. In this future, humans have ways to control aging so you can live as long as you like, cloning technology if you want that life to involve dangerous life threatening stuff and don't mind the inconvenience of reconstructing yourself. AI Minds also exist, in various generations and societies, most of whom seem to exist and interact through a collective program called The Conversation. We don't see much of what this setup means for ordinary folks of the universe, because the characters we spend our time with are on the unpleasant margins of this world. To survive their mercenary life, Maya and Rita have both been cloned and augmented repeatedly, to the point where Maya's body is degrading from the imperfect technology and Rita is mostly machine. Forty years after a mission which went disastrously wrong, killing two of their former crew (the "Dirty Dozen") and scattering the rest of them, Rita reveals that one of their dead friends, Elise, is still out there in virtual space, and that finding her might be the key to discovering Dimmuborgir, a lost planet with valuable secrets. Why Elise's survival took forty years to reveal is explained in universe as "Rita is a manipulative piece of work with an agenda she isn't sharing with anyone", but it serves as a spur for the pair to get the remnants of their band back together at an interesting time in everyone's lives, and to mount an imperfect rescue, allying with a couple of AIs while avoiding the many, many more who want to kill them.

There's a lot of meaty worldbuilding in that set-up (and shades of Kameron Hurley's Bel Dame Apocrypha and The Stars Are Legion), but The All-Consuming World is mostly interested in the dynamics of its aging cyborg gang, and particularly the relationship between Maya and Rita. We see the story mostly through Maya's eyes (including the prosthetic one she has installed, with no anaesthetic and lavish descriptions of eye socket speculum usage, after the original is gouged out seconds after hatching a new clone body... don't say I didn't warn you about gore). Her perspective is deeply warped by love and codependence for Rita, which is generally rewarded with abuse, manipulation, and speculums to the eye socket. Maya's internal dialogue already acknowledges the gap between her unwavering loyalty and Rita's sadistic responses, but when her old colleagues come back into her life, their reactions to seeing her still in thrall to Rita and the juxtaposition with their own lives provokes Maya to question even more of herself. Those colleagues include popstar and former almost-flame Verdigris, mercenary-turned-law-enforcement Constance, and Ayane, who doesn't really have any identifying features beyond "is hot and violent", which doesn't really work in this crowd (she also did the eye gouging). Maya also connects indirectly, through family, with another member of the Dirty Dozen, and it's through these relationships that the tension of The All-Consuming World builds.

This tension is all quite dramatic, and combined with scenes from AI Pimento (who is working for the AI that gave Rita the information about Elise and holds the location to Dimmuborgir), and from Elise herself, we get a decently three dimensional picture of this gritty, complicated conflict. Unfortunately, the focus on character has two drawbacks: first, because most of the interactions we see involve Maya, and Maya's brain is very specifically wired to care about Rita and almost nothing else, we don't get much character development for anyone other than her and the other two point of view characters. There are a lot of external clues as to how things have changed, and a great deal of information, from various perspectives, about the group's mercenary days and the extent to which that was actually a good time. There are also some identity shifts: notably Verdigris and Constance both come out to Maya as trans in the same scene (Verdigris is genderfluid and uses both he and she pronouns; Constance is non-binary and uses they/them). All of the mercenaries have moved on from, or become stuck on, different elements of their pasts, and while it's interesting to see through the eyes of Maya, a character who is terribly equipped to figure all of this out, let alone show any empathy and insight into what people's pasts mean to them rather than applying it all to herself, it also loses the opportunity to see some of these folks through their own eyes. Most characters feel like they have a convincing inner life that's hidden from Maya, but some (Ayane, and also Rita) just feel two dimensional as a result.

The second drawback is that, while it's interesting to get invested in these characters, their problems and the extent to which they are too old for this shit, there's a whole lot else that could be going on in The All-Consuming World and just... isn't. While we're watching the old comrades of the Dirty Dozen argue in space, there's this sense of a huge world full of AI-clone conflict and space exploration and histories and secrets of this universe that are beyond the grasp or interest of Maya and her cohort and, therefore, don't really appear here. In a weird way, this isn't a book that's very interested in what the characters themselves would identify as the story: their goals, the reasons behind the AI attacks, the importance of Dimmuborgir and the results of their finding it (this, in particular... well, you'll see when you get to the end). Once you're clued in to the fact that this stuff doesn't really matter, then it's easy in some ways to sit back and enjoy the ride, but I can't help but feel a sense of wasted potential that we didn't, at least, get more of a balance. It doesn't help that The All-Consuming World is pretty short, when it feels like there's enough to carry a much longer story here (then again, Khaw usually writes at novella length or shorter, so this being a short novel is in-keeping with their storytelling style).

We also need to talk about the writing. The story of The All-Consuming World is told in lavish, almost purple prose interspersed with regular swearing, as for example with Ayane's introduction from the opening chapter:

"[Ayane's] casual numinosity is frankly offensive. It is empirical, how stunning she is, a fact that exists external to the hypothesis that beauty is qualified by the beholder. Maya had not consented to having her breath shanked from her by something as egregious as Ayane retreating into a halo of artificial light, and she is pissed at this misstep by the universe, pissed she hasn't become inoculated to such bodily treason, that Ayane after all these years could still have such an effect."

There's a ton of interesting choices being made here which add to the characters being developed: Maya's weakness for physical beauty, even as she only has the capacity at this point to love Rita; Ayane being hot and dangerous (note how her beauty "shanks" Maya); the juxtaposition of an academic register, talking about hypotheses and empirical facts, with the religious notes (halos and numinosity) and then with slang like shank and Maya describing her emotional state as being "pissed". It's evocative stuff! But it's not a choice that's going to work for everyone, and to be honest, it's not a style that worked well for me. The All-Consuming World's expansive vocabulary it's not particularly accessible (I had to go and double check what "numinous" meant and that's nowhere near the most obscure word in this book), and it's also kind of relentless, even in pacy action scenes. It has the effect of either slowing the reader - and therefore the book - down, or making you feel like you've missed context by going along with it. At the end of reading, there are elements of the plot, especially the parts involving AIs, that I'm really unclear about, and I have no idea if it's because it was left mysterious or because my comprehension went on holiday at key moments, and while I fully accept that that's a me problem, it's a sign of this book and me not quite gelling.

All of that is quite a lot of negativity for a book that, actually, I liked reading a lot and think is objectively kind of amazing. Khaw's books have always almost worked for me, and after seeing their talents on such strong display, I'm reluctantly coming to the conclusion that I enjoy the idea of them more than the execution. Still, The All-Consuming World is going to have lots of fans out there among those who really gel with Khaw's work and those who are looking for some grim, femme-led space opera - if that sounds like you, this is one to look out for.