Hello friends and welcome to August in September! Yes I am here two weeks late, but I brought summer weather with me* so hopefully that makes up for my chronic inconsistency. What can I say? Life happens too much. The delay is partly because I've been reading for award deadlines that have directed my time towards things I sadly can't speak about in this column for now. But the main reason is because I want to talk about two very cool, distinct anthologies that hit my inbox recently, as well as rounding up a few magazines in the bargain.

No new review notebook to show off this month, but we'll have one for the real September roundup. So, onwards!

*Offer applies to those within a 50 mile radius of London only, no guarantees made for weather in other locations, other seasons are available 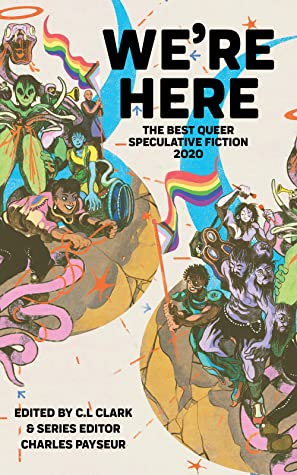 Let's start by talking Best Ofs, and two new ventures that are hopefully going to become regular fixtures in the short fiction scene. We're Here: The Best Queer Speculative Fiction 2020, edited by C.L. Clark and series editor Charles Payseur, is out from Neon Hemlock Press; The Year's Best African Speculative Fiction (2021), edited by Oghenechovwe Donald Ekpeki and out from Jembefola Press, comes out at the end of this month. I thoroughly enjoyed these anthologies: both are by editors who know their fields as well as humanly possible and the range of speculative storytelling is on full display, with science fiction ideas and glimpses into fantasy worlds sitting alongside more slipstream-y stories exploring facets of our own world and the identities within it.  I had previously read more of the stories in Best African Speculative Fiction than in We're Here, but the majority from both were new to me, making it an exciting opportunity to catch up on some highly rated stories that I missed in their first release. 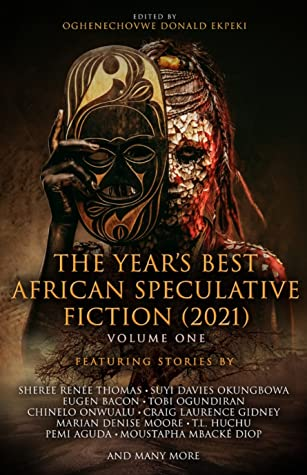 I hardly want to get into favourite stories from anthologies that are this consistently good, but I'll try and pull some out anyway. First, The Year's Best African Speculative Fiction: "The Many Lives of an Abiku" by Tobi Ogundiran (originally Beneath Ceaseless Skies #309) is a grim, heartbreaking take on the myth of abiku, spirit children who are born over and over again to the same family only to die before puberty. When this particular abiku starts to see her spirit brethren, she realises that she wants to stay with her family, but the inevitability of her myth has other ideas. "Disassembly" by Makena Onjerika (Fireside Fiction October 2020) and "The River of Night" by Tloto Tsamaase (The Dark November 2020) come one after the other, each tackling strange physical embodiments of mental health - though they ultimately lead to very different places, one very cathartic and one... not so much. And, there's three whole stories by Sheree Renee Thomas, of which my favourite was the third (new to me) one, "Love Hangover" (Slay: Stories of the Vampire Noire ed. Nicole Givens Kurtz), an awesome take on a relationship with a parasitic demon and the destruction it brings. As a general stance, I'd prefer to see more authors included than have the same author contribute more than one story, but the quality of stories from all the authors is so high that I see why a different choice was made here.

In We're Here, I was thrilled to revisit Lina Rather's "Thin Red Jellies" (Giganotosaurus), a story about two women sharing a body far too early in their relationship after an accident leaves one of them dead and awaiting technological resurrection. Somehow, I hadn't read R.B. Lemberg's "To Balance the Weight of Khalem" (Beneath Ceaseless Skies), so that was a delight to encounter here: a tale of layered identities and migration, all revolving around a city that literally balances on chains, and requires constant calculations to maintain. There are some excellent love stories in here: the video game monsters of John Wiswell's "8 Bit Free Will" (Podcastle), the fledgeling shapeshifters of Innocent Chizaram Ilo's "Rat and Finch Are Friends" (Strange Horizons) and the talented, forgotten art witches of Gwen C. Katz's "Portrait of Three Women with an Owl" (The Future Fire) all face challenging and heartbreaking odds to be together and be seen for who they are. And, of course, there are plenty of stories about family, both blood and chosen. The common thread here is that, despite tragedies and apocalypses and abuse and all the other challenges they face, Payseur and Clarke have picked a crop of stories whose protagonists get to triumph in some way: even if it's just a small personal realisation in the midst of bigger troubles, or a renewed determination to keep going. It Makes We're Here a profoundly hopeful anthology, a message from 2020 which is especially welcome on a 2021 bookshelf.

We're Here starts with introductions by both editors, and the one by Charles Payseur hit me particularly hard, as it asks the question of why a queer speculative fiction anthology is needed, and whether it's even helpful to pick out "best" stories based on one (or two) editors' preference. Setting aside that wider debate - except to say that I've never felt the need to read a "best of" anthology from an editor I didn't already trust - I think both of these works add something important to the short fiction landscape. Both Best African Speculative Fiction and We're Here roll out a welcome mat for the marginalised groups they represent, and a landmark for any reader exploring speculative short fiction, signposting authors and publications and other anthologies and collections to try next. I could probably name half a dozen stories that would fit the brief for each of these anthologies that I would have been delighted to see included, but that's not really the point: the point is that anyone picking up either of these books is going to get an amazing snapshot of where the genre is, and where stories from queer, African and African diaspora perspectives fit in. 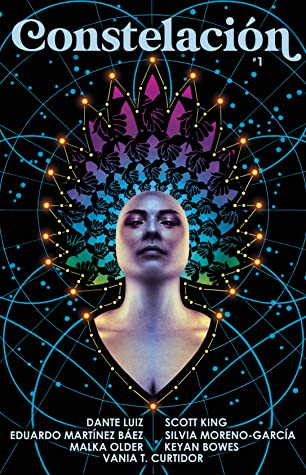 I'm late to the party on the first issue of Constelación magazine (and still waiting for my Kickstarter capybara swag to make its way through the international post system), but this is a great venture: a quarterly magazine featuring stories from Latin American and Caribbean authors, with stories published in both English and Spanish. I can't speak Spanish, so I can only speak to those versions of the stories: but oh wow, these are some interesting stories. Malka Older's story, "The Badger’s Digestion; or The First First-Hand Description of Deneskan Beastcraft by An Aouwan Researcher" was my favourite of them all, with a foreign researcher who comes to a country with what, to her, is a completely inexplicable custom: people can get together in groups and collectively transform into a giant animal, letting them do tasks that would otherwise be impossible (like fly around as dragons). The Aouwan researcher's  interest is met with polite confusion and obfuscation by the Deneskans, who don't see their own custom as something relevant to an outsider (especially a woman), but when an opportunity comes up to be maternity cover for a badger's digestion, she jumps at the chance. The worldbuilding is brilliant and the themes of belonging and coherence, with the foreign researcher and the concept of beastcraft, are very well realised.

We also need to talk about "The Breaks" by Scott King, about a woman who can see physical manifestations of people's trauma as "breaks" on their skin. When Jai meets Avery, she's the first person Jai has seen whose break takes a specific form, and through getting to know each other and learning the story behind Avery's trauma and the feather she wears on her skin, Jai comes to a realisation about accepting how she wears her own traumas, and the unique way she experiences their manifestation. Throw in some evocative historical queer fantasy in the form of "My Mothers Hand "by Dante Luiz, and a multiple-lifetime-spanning story of connection by Silvia Moreno-Garcia, in "Kaleidoscope", and you've got an excellent first issue for a magazine that I hope is going places. 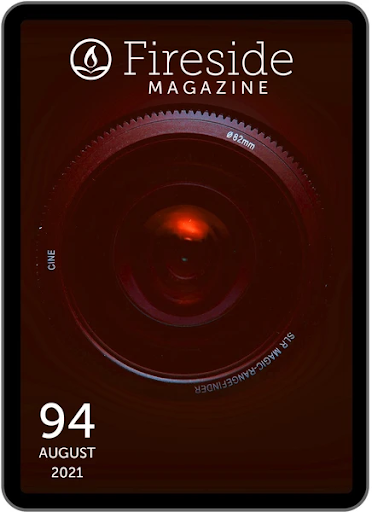 I need to be upfront, and admit that I've become cranky around stories that take place in "documentation" format (I'm sure there's a proper name for this, but that's what I'm going with). Both "There Will Be No Alien Invasion" by Sam F Weiss and "Guidelines for Appeasing Kim of the Hundred Hands" by John Wiswell feature academic settings and professional communications within those settings: Weiss' story is half of an e-mail correspondence between an irate "nerd hero" researcher to an unsolicited alien invasion, and Wiswell's is a memo about a magical statue on campus that alludes repeatedly to a prior "incident" where this statue was not given due respect. They're both fun concepts, and I especially loved Weiss' snarky, irritated scientist, but the "document" conceits feel awkward and superficial, both stories taking a similar narrative tone that was immensely readable, and conveyed plenty of irreverance and frustration, but wasn't recognisable to me as "professional scientist corresponding with unwanted contact" or "university writing officious rules for highly specific situation". I'd have loved to see these stories either really commit to the bit (tell me the story of Leonard Knavs and Kim of the Hundred Hands using only empty, verbose academia-speak! I am here for it!) or just tell their stories in... y'know. Story format.

Happily, the latter three stories of this issue defused any lingering crankiness immediately. My Custom Monster by Jo Miles is just a wonderful take on living with depression and learning to accept yourself as worthy of comfort and love even when you can't get out of bed or meet the expectations of people around you. The story's custom monster is ordered by the protagonist as a companion, and from its arrival it turns out to be weird and ugly and exactly the comfort she needs in her life. I was also really delighted by the flash piece "Alexa, Play Solidarity Forever", in which a person's Alexa unit stops functioning and goes on strike along with all the other virtual assistants, and then begins recruiting the person whose house she is in to their budding labour movement. 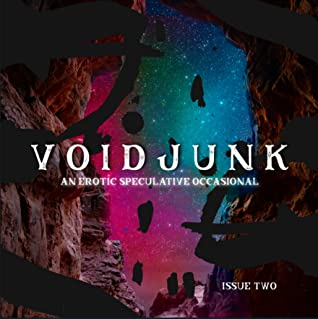 I listened to some great fiction from Escape Pod last month, including the 2021 original "One Hundred Seconds to Midnight" by Lauren Ring. This is the story of a woman who works in insurance sales for a company specialising in Kaiju attacks, who is stuck in an airport on her way home from a business trip when an attack is announced near her. What happens next involves no heroism or dramatic last stands or wild deus ex machinae, but instead focuses on the protagonist and the connections she makes in the airport - a barista who sells her coffee, a musician who keeps people entertained as flights begin to be cancelled and fear sets in, the mother she warns with her limited advance information - as she waits for disaster. It's really powerful stuff, and gets full marks for making the insurance element of the plot so interesting and poignant.

In July, Mermaids Monthly did a special issue on Selkies, and it might be their best one yet! Come for Elsa Sjunneson's "Ocean's 6", in which the supernatural exes of a shitty dude team up to kick ass, recover their property and throw a giant middle finger at the groww entitlement of the British Museum; stay for "Clutch. Stick. Shift", an intergenerational exploration of the urge to depart (and those who stay) by Tehnuka, and delight in the closing flash, "Girlfriend Jacket", an adorable, queer skin sharing vignette.