While you won't find Tom Lin on the SFF shelf, fans of the weird west will enjoy this lyrical read. 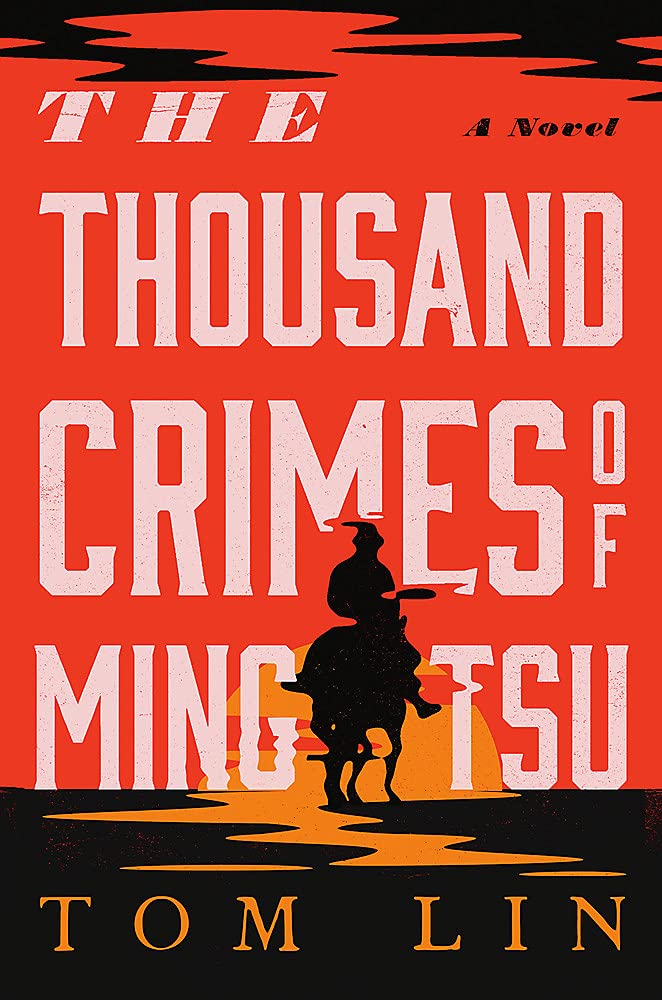 I love the genre of westerns in theory, but I've always found them hard to engage with due to their focus on the white male protagonist with plenty of racism and sexism thrown in, including a total lack of interest in engaging with the genocide of Indigenous people. It's hard to flip off all those switches when I sit down to read Cormac McCarthy. I knew I was in a different book when one of the main characters promised not to alter the memories of his friends, but when asked whether one of the white main characters was his friend, he said no white man was a friend of his.

Set in the desert between Salt Lake City, Utah and Reno, Nevada, this novel has a straightforward premise introduced in the first pages: Ming Tsu has a list of people to kill, and he's very good at ticking names off that list. As the story unfolds, the reason for his revenge spree comes out. Tsu and a white woman had fallen in love and married against her father's wishes. In order to annul the marriage, the father charges Tsu with miscegenation and has him sent to prison. Now, years later, Tsu hunts down those that were involved in sending him to prison in hopes of returning to his wife.

While such a plot is certainly enough to fill the pages of this novel, Tom Lin adds a cast of characters to weird his interpretation of the West. First, Ming Tsu brings a character called the Prophet to ride with him. The Prophet has no memory but a powerful ability: he knows when beings will die, men as well as nonhumans. Freed from linear memory, the Prophet can lyrically describe the past of the landscape as well as how it will all eventually return to a shallow sea.

The theme of time and memory is consistent throughout the novel. The Prophet informs Tsu he is a "man out of time," who has no clear hour of death. Similarly, the other people of the weird West revolve around time as well. On his way to check names off his list, Tsu and the Prophet join a traveling show of "miracles." The ringmaster, a white man, at first appears ordinary and has collected a traveling group of people with certain tendencies. There's Notah, a Navajo man, who can remove memories. Proteus, a "pagan," who can shape-shift into others. Gomez, a magical gambler. Hazel cannot be burned by fire. Finally, Hunter, a boy who can only speak through telepathy. They make their money traveling the West, demonstrating their miracles for an audience too drunk to realize they are, indeed, real.

The ringmaster hires Tsu to escort them to Reno, Nevada. Where this novel really shines is the lyrical descriptions Tom Lin includes along their route. Whether it's the Prophet providing history lessons of deep time, or encounters such as a huge sea creature skeleton buried near Pyramid Lake, the desert is hard and spare, but beautiful. Tom Lin's prose truly captures this beauty.

Additionally, Lin’s choice of protagonist repositions the genre. At its heart, the novel is a lyrical, if not fun, revenge story. That being said, it questions whiteness, what it means to be partnered with whiteness, and the power of whiteness. Throughout the novel, Tsu is juxtaposed to his white counterparts and experiences racism still prominent today: claims that he looks like everyone else, surprise that he can speak English, surprise that he can’t speak Mandarin, racist caricatures, in addition to the motivation for his revenge spree, being charged with miscegenation. In this novel, white people are in power and that isn’t ever a good thing.

Ultimately, this novel questions what has been erased in the West, from the previous inhabitants of the landscape to whole swathes of history. This novel recontextualizes the genre by centering the importance of Chinese immigration and labor in creating the “West,” particularly the railroads that are the center of so many western films and novels. In response, Tom Lin offers Ming Tsu, an epic gunslinger on a quest.

While Tom Lin addresses the suppressed history of Chinese immigration and labor in the West, other injustices are passed over or used for flavor, such as an attack from an unnamed Native American tribe. Ultimately, this is where the novel falls flat for me. It’s difficult to celebrate the inclusion of other suppressed histories while the Indigenous history of the era is passed over, as is the history Latinx people and Black people. Obviously, Lin couldn’t address all the injustices of the western genre—nor should he—but it’s also troubling when a Native American attack is not contextualized and the only speaking Indigenous characters are “magical.”

Tom Lin's The Thousand Crimes of Ming Tsu is a lyrical yet fast-paced read, telling the story of revenge against white supremacy. While this book includes much needed commentary on silenced history of Chinese immigration and labor in the West, it does so at the cost of other passed over histories. Too many of the diverse characters are quick sketches that can misstep into stereotype even as they question the systemic white supremacy that forces them together. While this book is an enjoyable read, I wish the story hadn't focused on one often glossed-over history at the cost of others.
The Math
Baseline Score: 9/10
Bonuses: +1 lyrical prose
Penalties: -3 Examining white supremacy at the cost of silencing/passing over other histories in the western genre, particularly Indigenous people, Latinx people, disabled people, and women.
Nerd Coefficient: 7/10
Reference: Lin, Tom. The Thousand Crimes of Ming Tsu [Little Brown 2021]
Posted By: Phoebe Wagner is a PhD candidate at University of Nevada, Reno. When not writing or reading, she can be found kayaking at the nearest lake. Follow her at phoebe-wagner.com or on Twitter @pheebs_w.
Posted by Phoebe Wagner at 9:00:00 PM