It might be years overdue, but Captain Marvel finally provides a great first outing for its unapologetically powerful main character. 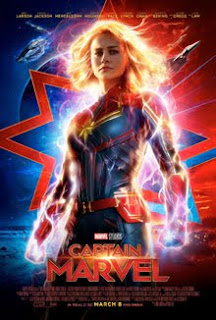 I'm relatively late and slow on the Marvel cinematic universe, and the fact that they've spent ten years and twenty movies without having a female-fronted superhero film is, let's be honest, quite a big part of that scepticism. When you're a woman interested in the stories of women (or, let's be honest, anyone who isn't the same muscly white man seventeen different times), it's hard to get enthusiastic about a franchise with high barriers to both entry and continuation which doesn't want to speak to you. As a space opera fan, I've seen (and liked) both Guardians of the Galaxy movies, and I tried the original Avengers, but it wasn't until Black Panther came on the scene that I started looking into what I've been missing. I'm still very much behind on the main arc, ignorant of everything that happens in Infinity War and a lot of the previous instalments too (who's this Bucky guy anyway?*) and currently weighing up whether to catch up on that main story in time to see the next Avengers in cinema or just to let that milestone pass me by.

Luckily, with the exception of a post-credits scene I probably shouldn't have stayed for anyway, none of this matters with Captain Marvel, which has a couple of returning faces but mostly blazes its own trail in a mid-90s setting that both capitalises on elder-millennial nostalgia for that decade and conveniently avoids any tricky "so why hasn't this woman been around in the 20 previous films" questions in-universe. This lack of baggage does more than make the film accessible: it allows it to build its own themes and turn this into a convincing, enjoyable and kickass origin story for the Captain to take centre stage.

Not that you'd realise it from the movie's beginning: Captain Marvel starts in the middle of a story that it feels like we should already be clued up on, though it does bring us up to speed and justify the decision pretty quickly. Vers, soldier on an alien planet, has been having nightmares that seem to be about a past she can't remember. She's been enlisted into Starforce as the Kree - an advanced civilisation run by an AI - fight a galaxy-spanning war against the Skrull, green-skinned shapeshifters who can mimic the form and voice of anyone they see. Vers' old life was apparently wiped out by a Skrull invasion, and Starforce are now moulding her and her interesting magic-fist powers into a level-headed fighting force via the mentoring of Jude Law's Yonn-Rogg, and is ready to do her bit to protect the rest of her people. After being captured and forced to relive some odd memories, including those of a "Wendy Lawson" on Earth, Vers decides to take matters into her own hands and go looking for Lawson against Yonn-Rogg's orders, with a sense that she might be tracking down something from her own past in the process.


If you've seen the posters, you won't have trouble figuring out "hey, this Vers lady is the one on the posters", and it's not going to come as a surprise to any but the most precious of filmgoers that Vers' memories are from her pre-Kree life on Earth: one in which she was Carol Danvers, ace pilot for Project Pegasus. The extent to which Captain Marvel's plot surprises is going to depend very much on how well-versed you are with the character's comic history and her wider place in the Marvel universe. Having picked up, like, 3 issues of Kelly Sue DeConnick's original Captain Marvel run - which entrenched the character's promotion from her previous iteration as Ms Marvel and made space for the rise of Kamala Khan in the process, I had very little background for the Kree-Skrull war and the history of characters like Yonn-Rogg and Lawson. Since watching the movie and doing a bit more research, it looks like the roles of these characters pay service to, but don't exactly follow, their comic book iterations. It also looks like we missed something great by not having the Kree wandering around in rainbow-coloured Captain Planet uniforms, as was apparently a Thing in the comics for a long time?


Whether it's wandering confidently around mid-90s Earth in a "laser tag" uniform, or reflecting her character's emotional journey as she tries to unpick what has been done in her past and understand how to move forward, Larson does well with the material she's given, although the emotional journey stuff isn't quite as exciting to watch as her lighter scenes, and I hope that comedic potential is played up more in future outings. What's refreshing is that Captain Marvel is explicitly shown as an ass-kicking sensation from the moment the movie begins, winning brief friendly victories over Yonn-Rogg by power-fisting him across a room, fighting her way out of an entire ship of Skrull with her arms encased in metal, and then getting a finale action sequence that felt like an absolute dream of well-realised power. Carol Danvers is an unapologetically, uncomplicatedly strong character and while that makes me a little worried for how she's going to be used in future, for this story it's just a joy to watch. The emotional journey is also extremely well backed up by the supporting cast, especially young Nick Fury (Samuel L. Jackson), and Danvers' best friend and platonic life partner Maria Rambeau (Lashana Lynch) as well as Maria's daughter Monica, who needs to get her superhero upgrade in the MCU sooner rather than later.

Because it does many things well, the blind spots in this movie do become more obvious. One huge one is the role of Gemma Chan as Minn-Erva, the only other woman on Vers' Starforce team and haver of many close-ups and few lines. None of the characters on the team get much development but having Chan's character apparently exist only to be kind of bitchy and indifferent to Vers is deeply frustrating, especially because the rest of the Kree are so dude-heavy. It's also frustrating, in a movie that gives such interesting roles to black characters like Fury and the Rambeaus, that the only rep for Asian women is painted blue and consigned to a flat role in the sidelines. I felt Annette Benning's role as Wendy Lawson also didn't live up to its potential, which would have been to really build up between the older Lawson and her pilot protegee. As it is, it's made competely obvious that Danvers feels that way about Lawson without actually giving the two the screen time to play it out for an audience. And while I do think Brie Larson knocks it out of the park in the role, especially in her 90s grunge girl aesthetic, I would just love to live in a world where the first movie-carrying woman could be something other than white and conventionally attractive. There's still so much to unpack here about who does and doesn't get the opportunity to shine, and while I welcome this as a good baby step, it still is one and it's hard to get too excited about the glacial progress of representation on film.

Captain Marvel is a great film, and as every woman led film outside of "chick flick" genres needs to be a great film in order to justify its own existence, that's something that we can all breathe a sigh of relief about as well as celebrating. Its smart message about self-belief, regardless of the limitations people feel entitled to stick on you, is one that works particularly well for a female superhero, and is overt about sexism without it overtaking the narrative or overshadowing her unique journey or the fact that she's probably the strongest and best thing I've seen happen to this franchise. I came out of Captain Marvel immensely pleased that I'd made the time for it, and up to 7.6% more likely to watch Avengers: Endgame next month: a victory all round.

*Note: this line is just for effect. Please do not write to me explaining who Bucky is.

Penalties: -1 There is still so much to be done to ensure diverse representation beyond a white woman and some black supporting characters.