Hello, fellow nerds! As I've mentioned a few times on here, I'm currently in a PhD program studying English literature with a focus on environmental and speculative writers. For those of you who have lived the PhD life, you probably have an idea of what's on my summer reading list: comps. While I'm not super close to taking my comprehensive exams (basically a test with a lot of timed writing and hundreds of required books), I'm going to start chipping away at the list: 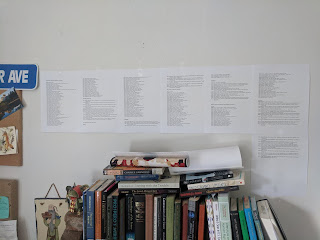 Since I'm studying speculative writers, much of the reading, especially at this early stage, will be books I've just missed or haven't gotten to yet, like Dhalgren. Of course, no comps list would be complete without plenty of theory, so when I'm exhausted from all the academic language, I picked up the perfect remedy at a used book sale: 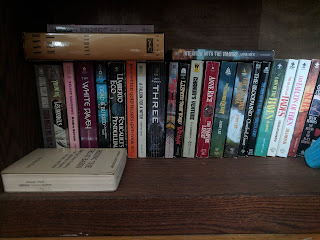 Yes, that is a shelf of much pulpy speculative, with some classics thrown in. I figured what could be better than to de-stress from reading about postmodernism than unicorns on an epic quest?

So, as I embark on my own quest to defeat the dark lord of comprehensive exams, here's a snippet of what I'll be reading this summer!

A sci-fi classic that I have stared at on the shelf for years, now. Growing up, I was much more of a fantasy-reading kid, so I knew of Delany but never picked up his books, even when I went through a classic SF reading phase. Of course, a comprehensive list of American speculative literature wouldn't be complete without Dhalgren, and I'm excited to dive in.

Another classic of speculative literature, though less read, I believe. I first became interested in Imaro as an early example of sword & sorcery and diversity in SF. Since I read and wrote about Marlon James' Black Leopard, Red Wolf, I've become more interested in the power of sword & sorcery as escapist decolonizing fiction. I'm excited for a romp and will probably use this novel as a short, fun read when I'm exhausted by the heavy hitters.

I've ready a lot of Neil Gaiman's other work, and he's one of my most influential authors as a young writer. I've paged through and read several volumes of Sandman, but I haven't sat down and poured over it. I have the four volume annotated editions, and look forward to following the Sandman into a dreamy extravaganza.

As I promised, lots of classics on this list. For a better write up than this tiny blurb, check out Vance's post right here at Nerds! When making my comprehensive exams reading list, there are certain books that one knows must be included if talking about American speculative writers. Of course, Russ is one of them. That being said, The Female Man is one of those texts that I've always heard about and referenced when discussing SF and feminism, but I haven't read it nor really know anything about it. But Vance's summary sounds pretty wild--time travel, alternate dimensions, assassins. I'm totally down for something like that being on my required reading list.


5. Staying with the Trouble: Making Kin in the Chthulucene by Donna Haraway (2016)

Haraway is known for her confusing, riddling academic language. This is an accurate depiction of her writing, though it is also kinda fun when you have words like "chthulucene" thrown around. The reason it my be of interest to readers of this blog is her inclusion of speculative writers like Ursula K. Le Guin and Octavia Butler. While she was known for her work in feminist theory (particularly the Cyborg Manifesto), this current book delves into eco-criticism, especially other-than-humans. I've flipped through this book, but don't normally make it more than a page at a time. This summer, though, I have hoped of writing an article titled "Tentacular Spectacular: Dungeons & Dragons as Embodiment of Nonhumanity," which would force me to read Haraway's book (as the title comes from one of her chapters) AND I'd get to write about my favorite D&D livestream The C-Team. Theory and D&D, no better pairing.

One of the more modern authors on my list, I've wanted to read Jones' work for quite awhile. I still hope to pick up Mongrels at some point (I'm a sucker for werewolf stories), but a horror story about mapping the interior of a house pushes so many buttons not only in speculative literature but also more broadly in the literary cannon. Additionally, it's a shorter read, which gives some nice balance to starting this list with Dhalgren. Overall, I've heard lots of good things about this novella and Jones' writing in general, so I'm happy to finally dive in!

Phoebe Wagner currently studies at University of Nevada: Reno. When not writing or reading, she can be found kayaking at the nearest lake. Follow her at phoebe-wagner.com or on Twitter @pheebs_w.
Posted by Phoebe Wagner at 12:00:00 PM