In Velocity Weapon, Megan O’Keefe takes her talents honed in steampunk fantasy and expands her oeuvre to an intriguing interplanetary space opera. 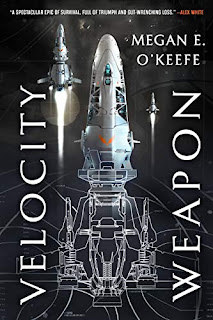 Sanda Greeve has a problem. Her ship was destroyed in a battle in a interplanetary war between her planet of Ada Prime and its in-system rival Icarion. Her life pod is finally found--but  centuries in the future of the aftermath of that fight. Not only is the war that she was fighting long dead, so is the entire solar system. Her only company is Bero, the AI of the Icarion ship the Light of Berossus which has found her long lost life pod. Survival is the first concern, and then figuring out what she, and her new ally Bero can do. They are survivors, human and AI, Ada and Icarion, in a dead solar system. The Gate to the nearest solar system is gone, too. And a slower than light trip to the nearest solar system would take enormous resources even for a crew of one sleeping most of the time.

Biran Greeve has a problem. His sister Sanda has been lost in a skirmish between Ada Prime and the rival planet Icarion. He thinks there are maybe surviving lifepods, even if the rest of his fellow Keepers think otherwise. Biran’s determination to try and find his sister is a driving force that catapults him into an unprepared-for leadership role, just as the war with Icarion threatens to fully fulminate.

These are the two major storylines in Megan O”Keefe’s turn from fantasy into science fiction, the first of a new series, Velocity Weapon.

The novel has lots of interesting ideas right down to character beats. Sanda’s war-manifested disability, the loss of a leg, is an abiding and recurring problem for her throughout the book. The author doesn’t trivialize the loss of the limb with magic future tech, especially given the impoverished, solitary future she now lives in, and we can see and understand the frustration that a soldier feels when so horrendously injured. On a similar beat, back in the past, Biran’s unexpected change in role and status when he is fruitlessly simply trying to find his sister means that he has to level up into a leadership role quickly.The author does a great job showing how he has to rise to this challenge and deal with the issues emerging from his rise. The two siblings, even though separated in time and space, make a strong core of a resonant pair of main characters to support action, plot and theme.

There is a lot about the novel that in a spoiler culture that would be irresponsible for me to share, for I would rob the reader of some major discoveries and revelations in the novel. This does make a fair chunk of the novel’s plot unreviewable without uncovering those revelations and what they mean looking backward and forward in the novel. I was caught by surprise by the revelations, especially the first and largest, and it is the kind of revelation that causes the reader to reassess what has happened through its lens, as well as going forward. It was excellently done.

Setting aside spoiler warnings, the novel contains bucketloads of what one might seek in an interplanetary space opera. Orphaned Artificial Intelligences. Twisty planetary politics. A stargate! Strange neural hardware. Heists. The challenges of decaying technology. Space Battles! And more I can’t even discuss because of the aforementioned spoilers! The novel is full to bursting with ideas and action (as is now a recognized feature of O’Keefe’s work) and it’s just a lot of fun to read.

The major weakness I found, and it is more of an annoyance rather than anything,  is when the novel turns away from the siblings in it’s point of view to look at a completely different solar system, the Atrux system, where Juliella is a petty criminal who gets in over her head. [The Atrux system IS the nearest system to Ada Prime and Icarion, it must be said]. The plotline for Juliella feels like it’s a thread from another book entirely. It’s physically and temporally isolated from all the other action in the book and the connection between it and the siblings’ storylines is extremely tenuous. Late in the book, it starts to make a bit more connection, but still, it feels more like setting up for a future novel than a solid strand of its own. There simply isn’t enough scaffolding there to support the disconnected storyline.

Although I found the setting of the Atrux system interesting, as much as we can see of it anyway from limited page count, the events there did not compel me. Frankly, I found events in the Ada Prime/Icarion system events  to be far more compelling, including when we briefly break point of view from the siblings to the point of view of talk show shot Callie Mera.

Overall, however, the novel is a very promising start to an intriguing space opera series. The strong characters, well built world, and excellent plotting all manifest in an excellent reading experience.

Bonuses : +1 for very strong character development and motivations +1 for a *WHAM* plot twist that left me floored in a good way.

Penalties : -1 for a point of view/subplot that feels vastly undercooked compared to the main plotlines