Before we hop into this week's comics I wanted to share a Kickstarter that I am a proud backer of with the hopes that some of you will consider supporting this important project. Comicker LLC relaunched their Shots Fired campaign to raise money for the Coalition to Stop Gun Violence and the Community Justice Reform Coalition. A group of tremendously talented creators and lending their time to this anthology and I really hope that it funds quickly. 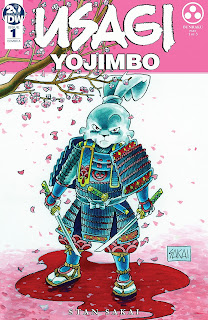 Pick of the Week:
Usagi Yojimbo #1 - Stan Saki and Tom Luth have teamed up with IDW Publishing to bring a new era of Usagi Yojimbo books to life. If you aren't familiar with Usagi Yojimbo, it is a relatively light hearted comic that is rich with Japanese history and folklore. This book introduces the reader to the art of Bunraku, a form of puppet theater and the rigorous training that these artists go on in their puppeteering journey. Toss in some good old fashioned demon hunting and you are left with a highly entertaining book that teaches you something new with each issue. This is a series I plan on introducing my kids to and I am hopeful that a new generation of comic book fans will get to enjoy Saki's stories.

The Rest:
Daredevil #7 - This was a slower issue that introduced some interesting plot points that will impact the story moving forward, but one that had me wanting more. The big twist was that Kingpin is retiring from his life of organized crime, but is still going to pull some strings from his position as Mayor.  Matt Murdock, on the other hand, is still grappling with his past and is inching towards becoming Daredevil again. He has some inner demons he needs to confront before he will be capable of returning properly. I am curious to see how things shake up without Kingpin overseeing the various leaders across the city.  I have a feeling that once they vie for control that it will force Daredevil out of retirement.

Gideon Falls #14 - Father Bishop, an individual that is referenced as disappearing years ago early on in the series, has returned to Gideon Falls after 50 years without aging. We learn that in one of the alternative dimensions in which he was pursuing Sinclair, time moves much slower.  He learns that he is destined to gather a group of five leaders to fight the darkness that Sinclair is bringing to power. Jeff Lemire is clearly building towards an epic showdown between the two groups and I hope that we see more of Sinclair assembling power for his means in the next issue.