If you are looking for a nostalgic horror anthology I highly recommend checking out the Graveyard Slaughter Kickstarter by Adam McLaughlin and Kevin Watkins. Featuring four stories written by Cullen Bunn and Kevin Watkins, this anthology seeks to bring us back to the types of stories that we rented and watched as kids as long as our parents allowed it.  As I type this post it is very close to funding and I am looking forward to diving in once I get my copy. 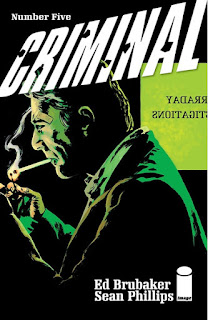 Pick of the Week:
Criminal #5 - Ed Brubaker and Sean Phillips are bringing a new arc and I couldn't be happier. While promising to deliver on the final days of Teeg Lawless, this story focuses on Dan Farraday, a detective who feels the need to help women even if it breaks with how a private detective should act. His current case has him tracking down a woman who was having an affair with connections in the financial industry, a seedy Mr. Wyndham who is not to be trusted. In the course of tracking her down he starts to gain a new found respect for her and all of the crimes and con jobs she pulls while he is following her bread crumbs. The romantic in me appreciates the approach that Farraday has, but I think he underestimates exactly who he is dealing with.  And I don't mean Mr. Wyndham.

The Rest:
The Walking Dead #192 - I stopped reading this series quite some time ago, but felt the need to pick up this issue due to some rumors I read earlier this week. This is definitely a monumental issue in the series that will have fans talking for quite some time. In typical Robert Kirkman fashion, when it appears that the crew have found peace we learn that in this environment it is fleeting. The individuals trying to survive have always been the heart of this series and it appears that Kirkman is continuing to carry this forward as he approaches issue #200.  I am not ready to pick up this series again, but happy I revisited it for this issue.

Birthright #36 - After some time off from this series it has returned and Joshua Williamson does a great job bringing readers back up to speed at the current state of the world and Terrenos.  He opens this issue with a nice history of how some of the magic from Terrenos had been discovered in the late 40's and the government has been hiding it ever since. Meanwhile, when Mikey vanished and returned a grown man, these incidents have increased tenfold. I am not sure why it took me so long to realize the parallels from this series and Fringe, but this walk through the history of how humans discovered magic is real brought me back to one of my favorite television series. Williamson is setting up an explosive end that if it doesn't go well could lead to the destruction of our world and Terrenos.

Paper Girls #29 - Brian K. Vaughan, Cliff Chiang, Matt Wilson, and Jared K. Fletcher's time traveling epic will conclude with issue #30.  The girls find themselves at the same location and time, but in order to return to their proper time they need to have the memories of their adventures erased. We have come a long way from an exciting morning that saw the girls deliver newspapers only to be assaulted by what appeared to be aliens and it is sad that they will lose out on the growth they each had throughout this series, but at least they get to go home.  Something tells me that there will be one last trick up the creator's sleeve that will preserve some of the memories the girls held.  I am hoping for a flash forward as well to see how they compare to the future selves they met throughout their adventures.

Star Wars: Age of Rebellion: Luke Skywalker #1 - If you are a Star Wars fan looking for a good read this week I highly recommend this self-contained story. A simple story that showcases the power that Skywalker has, I was more intrigued by the powers the Emperor wielded from afar. Similar to how Snoke brought Rey and Kylo together, the Emperor uses the Force to trick Skywalker as he is attempting to escape after lifting a boatload of fuel from the Empire. While there is nothing mind blowing in this issue, it is an enjoyable entry in the lore between the movies that is worth your time.