Adrian Tchaikovsky’s Children of Ruin continues the Children of Time universe in a mostly standalone braid of stories of terraforming, Uplift and first contact. 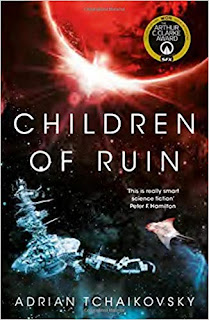 “Mate, spiders are the least of it now.”

So the author himself said to me on twitter just before I cracked open Children of Ruin, the latest novel from SFF author Adrian Tchaikovsky. In SF circles, the author is known for using insects, particularly spiders, both in SF and fantasy contexts. I read the novels, waiting for the insects and spiders.

And so we come to his newest work, Children of Ruin. The novel follows two strands in the web of plot. In the “past” timeline, a human exploration ship before their fall into a dark age (and subsequent revival) has come into a likely solar system looking for a planet to terraform. What they find are two candidate planets, a marginal glaciated one, Damascus,  that might be melted into terraformability, and a second inner one, Nod, that, much to their disappointment is already full of indigenous life. That strange  alien life is worth study, but it means the planet is not really suited for future colonization. But within that life on Nod is a surprise. On Damascus, in the meantime, a crew member’s idea to use octpodes to help in the colonization will have unexpected consequences.

In the present day, a Human/Portiids (Spider) exploration ship with a clone of the AI from Children of Time, has arrived in that same solar system thousands of years later, to find, to their shock and surprise, what has happened in the interim to the two planets. The humans are gone, but on both planets, their legacy and inheritors are most definitely in evidence, and much more than the explorers anticipated. The octopodes, now fully intelligent and spacefaring,  now control local space, especially around the outer planet. And they seem to have a real aversion to humans. And what is happening on the inner planet is even stranger and more dangerous still.

The novel braids these timeframes, slowly revealing for the reader  (although the main characters in the present do eventually get dialed in) as to how the Terraforming project earlier in history did go so badly wrong, and the subsequent rise of the octopodes as a civilization, as well as the nature of the threat on the inner planet, Nod. Thus, the backstory strand is very much a story of terraforming and attempted settlement gone horribly wrong. In this way, it reminded me of Kim Stanley Robinson’s Aurora in the sense of “meddling with and building ecosystems has unintended consequences”  (something  the prior novel is all about)  but without the frisson of “We never should have left Earth in the first place”.

A lot of the meat of the present day timeframe of the  novel comes around just what is on Nod,  why it is what it is, and how it is to be dealt with, along with trying to deal with the octopodes, who have their own mythology, for lack of a better word, about Nod. This enhances  what could have been a straightforward first contact portion of the novel into giving a existential threat, a ticking time bomb and a device that keeps the action flowing in the present. While the past does sometimes wanders a bit in its flow, the present is always under a relentless pacing that really does keep the pages turning with space battles, high tension and lots of action.

And then there is the emergent theme, one that is present once the human-Portiid contact happens in Children of Time, but it is even more extended here: How do intelligences alien to each other actual in the end manage to have meaningful communication? How can it be done, if at all, and what does it take to make it happen? Even among the Human-Portiid expedition, they are experimenting and trying to improve their alliance by improving how they communicate with each other. Add in Kern  herself, the Octopodes, and Nod, and there is plenty of fodder to explore the hazards, challenges, and possibilities of interspecies relations.

As fantastic as Children of Time was, readers who are new to Tchaikovsky,and are wondering if they might start here instead, I can confidently say that for the most part they can. The only individual character who bridges the gap in any sense is the aforementioned AI,  Kern, but the text does embed the essentials of who and what she is, and what she was in Children of Time. that readers can pick things up pretty easily. They might be surprised, though by some of the tech--like the fact that Kern’s hardware is partially composed of an ant colony.

I do appreciate that the author decided to go for a new approach here as opposed to the first novel. It would have been very easy for him to recapitulate the fast march evolution of the first novel and apply it instead to the Octopodes. We do find out how and why they make a technological civilization but it is braided with the main plot rather than being the thrust of the Baxterian march of time in the previous novel.

I think overall Children of Time is by a hair the better book. And I do think the nonhuman characters of Children of Ruin are inherently more interesting than the humans either in the past and the present. I think this is a consequence of the love, craft and care that the author puts on his non human creations. Not only the Portiids (that I’d have expected) but the other non human characters as well come across really well as alien but understandable characters. Still, given the hazards of sequels and second novels set in a universe, the novel archives a very high standard, and is certainly already a contender on my mental nomination ballots.

With Children of Ruin, Adrian Tchaikovsky proves and continues to prove that he is one of the most exciting, inventive, thoughtful and talented SF writers in the field today.

Bonuses : +1 for inventive worldbuilding and world design
+1 for showing the problems and possibilities of interspecies contact in a realistic way

Penalties : -1 The human characters do not come alive quite as much as the non-human ones