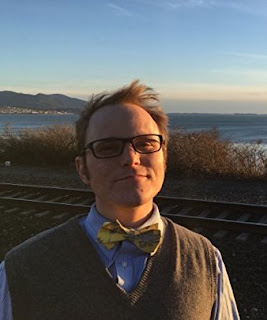 Spencer Ellsworth has been writing since he learned how. He is the author of the Starfire Trilogy from Tor, beginning with A Red Peace, and The Great Faerie Strike from Broken Eye books, along with many short stories. He lives in Bellingham, Washington, with his wife and three children, and works at a small tribal college.

I've just started Laura Anne Gilman's Silver on the Road, which is wonderfully creepy and moody. I've been working on an early American fantasy, so I'm hitting everything in that little subgenre--Alvin Maker, Wake of Vultures, etc.

It's a very cool and neglected subgenre. I'm especially hoping, in my fantasy, to unpack more of the problem of seeing the "frontier"--essentially land cleared by genocide against indigenous people--as a romantic place.

It would have to be Fonda Lee's Jade War. Jade City was one of my favorite reads last year. I love gangster family sagas, and I love how much magic was interwoven into a corrupt, nasty little 1960s Hong Kong as fantasy world. It was so original and crazy cool. When we associate fantasy, so often, with 100+ year history, it is super-fun to see a secondary world that's coded as 50 years ago.

I always am itching for my yearly re-read of Octavia Butler's Wild Seed. Join in, y'all, on Twitter! #wildseedreread, coming soon. I adore that book, partially because I feel a different way about the ending every time. It's so dark, deep, and powerful, and Doro and Anyanwu's struggle is more compelling both morally and suspense-wise than anything else I've read in fiction.

Oh, man. You know how we all have that book? The book that is objectively meh but hit you hard at an impressionable age?

The Wheel of Time got me right when I was in the 12-13-year-old zone of forgiveness and imagination. I adored The Eye of the World--the scary sequences with attacks on the farm, the Myrddraal melting into shadows, faces with no eyes, creepy dreams, the weirdness of the Ways, etc, etc.

Now, I recognize that it was a bit of a Tolkien pastiche, and by "a bit," I mean, it started with a black rider on an empty road! I still enjoy all the things the novel does right, and still reread the highlights of the series every few years, but I have to admit that it's become dated.

This is a bit weird, but the first craft book I ever read was James N. Frey's How To Write A Damn Good Novel. (No, he's not THAT James Frey.) I had just turned eighteen, and finished my first terrible novel.

The book's at least 30 years old now, but I still think it's full of great advice! It breaks down a lot of structure, character-building, dialogue and scene pacing, and constantly uses a set of varied good novels to explain how these principles work. That said, it's so focused on structure that it's probably a better book on revision than any kind of freewheeling first draft.

The Great Faerie Strike, baby! It's the tale of an industrialized Otherworld in 1851, controlled by the vicious grip of a werewolf tycoon. Our hero, Charles, is a rabble-rousing gnome, who first gets laid off and then caught by a pack of vampires and. While waiting to be eaten in their larder, finds a strange pamphlet in a half-eaten corpse's pocket... The Communist Manifesto.

Charles and Jane, the Otherworld's first investigative reporter, seek the truth about the tycoon's mysterious magical capitalism, and organize a strike, and try to deal with their very complicated, forbidden feelings for one another... and, of course, the answers they find to all their questions may spell the end of both worlds.