Microreview [game]: Whispers of a Machine

In the future, there is no more IKEA...

Whispers of a Machine is a retro point-and-click adventure game in the Sierra/LucasGames mold. It features gorgeous VGA pixel graphics, a strong protagonist, engaging story and some neat gameplay innovations. But it also suffers from the genre's endemic weakness: namely, a reliance on unintuitive "fetch this for that" puzzles.

Whispers of a Machine bills itself as a science fictional take on Nordic noir, and the shoe fits. It is part of a growing movement of works across multiple media that asks what could happen when if the digital tools we increasingly rely on were to progress on their current trajectory, and then fail en masse. We are not told what happened, exactly, only that artificial intelligences have been banned as a result.

It is also a moody and atmospheric crime story. Vera Englund is an Operative - a kind of super agent with cybernetic enhancements - who has been sent to the small town of Nordsund to investigate a pair of gruesome murders. We are introduced to the town and its inhabitants, including a well-liked police chief, an enigmatic member of the Town Council, an eccentric robot mechanic and, of course, the murder victims. Slowly but surely we come to understand that the murders are linked to the worldwide ban on AI.

Gameplay is mostly what you'd expect - talk to various inhabitants of the town, search drawers for items of note, then use said items on said inhabitants or on other items. Go from A to B and then back to A. There are some innovations, though. Vera has a gun, which you can use occasionally; and she has cybernetic enhancements, which are quite cool. One is a forensic scanner, which you can use to uncover physical evidence and clues. Another is a biometric scanner, which allows you to detect when a witness is lying. 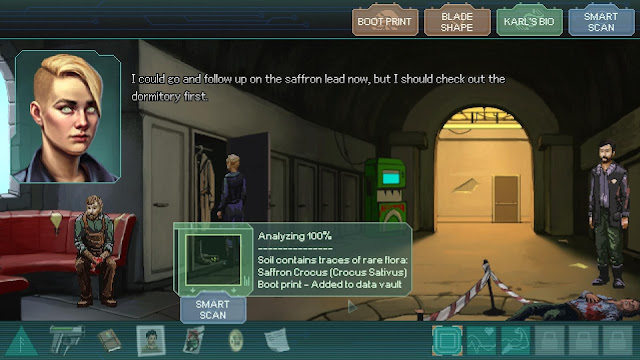 Then there are powers you develop over time - six in total, though you would have to play through multiple times to try them all out. The ones you get are determined by the dialogue choices you make - each conversation gives you analytical, empathetic and assertive options; pick one and you get different powers, which then determines how you solve various puzzles. I really like this idea, and it helps distinguish Whispers of a Machine from other retro-adventure games. It also adds replay value, as there are three paths to choose (as well as two choices at the end of each path). This is also a plus given that Whispers of a Machine is, like the genre classics it's modeled after, quite short.

All of this makes Whispers of a Machine an worthwhile experience. As an adventure game devotee, I'm very happy I picked this one up. That said, the game replicates some of the old school's major flaws. A lot of the puzzles are basically "fetch this for that" - a fact made worse when the connection between this and that is wholly unintuitive. That means you either solve the puzzle through trial and error (which is tedious) or through a cheat guide (which defeats the purpose of playing a puzzle game).

Old school adventure games used these kinds of puzzles because they were typically coded by one or two people and severely limited by storage size, neither of which applies in 2019. So if there is a sequel, I'd love it if the developers could lengthen the game and deploy more sophisticated puzzles. 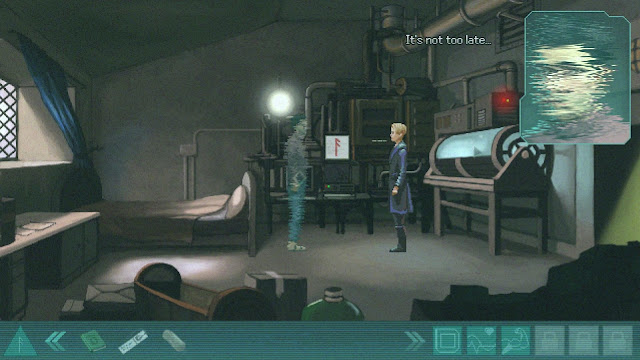 I also have to say that Whispers of a Machine didn't pack quite the emotional punch of recent classics like Primordia or Gemini Rue, which explore the same narrative territory. The story is good, mind you - and certainly has its emotional touchpoints. But it felt like there are a more impactful message to send about our relationship to and reliance on technology.

Overall, I'd say Whispers of a Machine is a strong entry in the revitalized point-and-click genre. Adventure gamers should definitely pick this one up, but in the end it's one step short of greatness.

Penalties: -1 for unintuitive fetch-this-for-that puzzles; -1 for just missing the mark on story.