Welcome back for another edition of Reading the Hugos, our ongoing and long running feature looking at the Hugo Awards. Today we're going to look at the six finalists for Graphic Story.

This year, not a single comic I nominated made the final ballot. The one I most feel the loss of is Ed Piskor's X-Men: Grand Design, which I thought was a novel reimagining and retelling of of the earliest X-Men stories (see SFK's review). As a general rule, mainline Marvel comics don't make the Hugo Awards ballot (meaning, Avengers / X-Men stuff that doesn't have strong genre ties or are written by well known / regarded writers like Nnedi Okorafor or Saladin Ahmed) and it would have been nice to see Piskor breaking through here.

Regardless. On to the finalists. 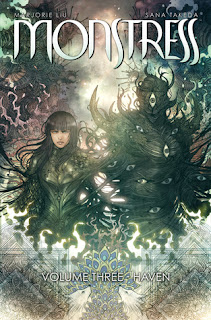 Monstress: I find myself increasingly in the minority regarding Monstress. There's no questioning the raw excellence of Sana Takeda's art, but I'm not sure I'm really following the story anymore and I'm not interested in going back and re-reading each preceding volume before jumping into the new one, just in the hopes that I'll be able to piece it all together. There's some cool (and badass) stuff in this book - perhaps more here than in "The Blood", but I'm reading Monstress more out of some sense of genre obligation and a vague hope that this will all come together for me in the next book. We'll see. 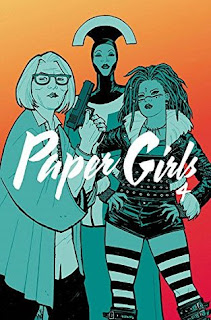 Paper Girls: Similar to Monstress, I'm not really sure what the overarching story is over Paper Girls or what Vaughan is building to. Unlike Monstress, I'm all in for this ride. I dig the time travel and being of a certain age, dropping the girls into the year 2000 and the fear of Y2K hits a particular emotional nostalgia that I remember so well - but what makes Paper Girls work so well for me is the interactions between the four girls, how they interact with the points in time they're dropped, and the gradual reveals of a war to change or preserve time itself. Maybe even moreso than Saga, I hope this is an ending that Vaughan is going to be able to stick and that he has a plan to bring it all together. But, for now, Vaughan is firing on all cylinders. 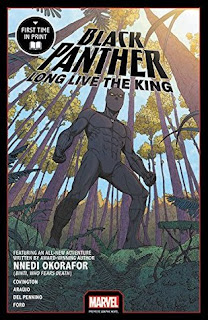 Black Panther: Okorafor brings Black Panther back from global threats and wide scale battle, and even from major events threatening Wakanda to tighter stories focused more on the "people on the ground", the citizens of Wakanda through the eyes of T'Challa. I appreciate that these aren't big stories, but rather are trying to reach the heart of what Wakanda is and can be and if it really is or can be as utopian as possible for all of its citizens. 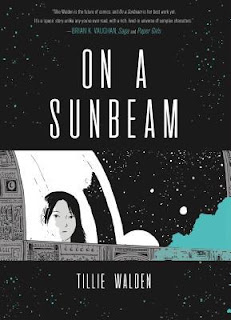 On a Sunbeam: On a Sunbeam is a love story, a friendship story, a space adventure, a story of rebellion at a boarding school, and a bit of an action movie all rolled into one. It’s a beautiful piece of quiet storytelling. With absolutely wild visuals of architecture and space travel that probably would make no sense in a more conventional science fiction story, On a Sunbeam is grounded into the relationships between Mia and Grace and with Mia and the crewmembers of a spaceship shaped like a fish who become a family to her. The two narrative paths of the story are set five years apart, and one part of the “present” storyline is wondering how Mia got from the school to the ship and just what happened? I’ve never read anything quite like this, though it feels familiar at the same time.

The other finalists for Graphic Story are what I think of as more “traditional” comic books, collections of 4 to 5 issues published individually then gathered together for a trade paperback collection often around 120 pages. They are usually a story arc that may or may not hang together as a singular volume. On a Sunbeam was originally a webcomic and when published in book form clocks in over 500 pages. In some ways, On a Sunbeam feels like the sort of work the Graphic Story was created to honor, though looking at the history of the category shows a reasonable cross section between works that make the ballot for 3-5 years in a row and others that are much more of a one off tale or just represent good storytelling that year. However you consider On a Sunbeam, it is wonderful. 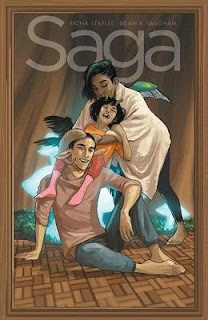 Saga: Saga has been a difficult book to talk about because the events of any given volume are just so batshit insane, even nine volumes into to the series - but the core of the story has been the star crossed love story between Marko and Alana and their perpetual attempts to keep their daughter safe even though it seems everything in the galaxy want them dead. The core is there, as are the hints of heartbreak permeating the series through their daughter Hazel's narration.

Volume 9 is the midpoint for the series and it marks the point Vaughan and Staples are taking a year long hiatus. They're leaving us with shock, awe, and pain. Every time it seems the series has hit a new high point, they reach back and let loose another fastball thrown harder than the last one. I'm not sure a baseball analogy works here, but there are some seriously shocking and series altering events in this book that I'm not sure how else to talk about them in vague terms. Listen, Volume 9 collects issues 49 through 54 and this isn't the place to begin if you're new to Saga - go back. It's one story and it's a great one. 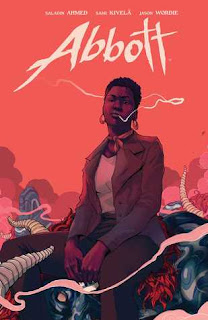 Abbott: Saladin Ahmed comes hard with Abbott and he doesn't relent for a moment. This is a bad ass comic book and it is everything I didn't know that I wanted until I read it. Elena Abbott is a reporter covering some nasty, nasty crimes ignored by the police. She's better than good at her job, but then she'd have to be as a black woman in 1972 Detroit. Racism. Sexism. Some evil magical shit. Ahmed has packed Abbott with top notch storytelling and a tight narrative that you don't want to look away from, but maybe not late at night.

Abbott is a revelation. There are secrets and lies and this is a stunning, great piece of writing matched to near perfect art. Don't miss this.

Joe Sherry - Co-editor of Nerds of a Feather, 3x Hugo Award Finalist for Best Fanzine. Minnesotan.
Posted by Joe at 12:00:00 AM