Holy crap!!!!!!  This is the best news of 2019 and I am now more than ever as I start planning what is likely my final SDCC. Joe Hill and Gabriel Rodriguez have always said that there was the potential of more Locke and Key and this confirms it.  I really hope there is a panel and I am super pumped. 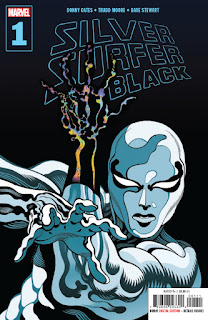 Pick of the Week:
Silver Surfer Black #1 - This five part series takes place after Thanos was recently killed and Silver Surfer was one of many to be tossed into a black hole at the reading of Thanos' last will and testament. Penned by Donny Cates and Tradd Moore, this is a story of remorse and redemption. The Surfer acknowledges all of the death he brought forth assisting Galactus, and summons his cosmic power in an attempt to save as many people from the void as possible. After exhausting himself in this process, he is taken by the void and learns that there is a planet in the black hole that is the source of the darkness. This mini-series will focus on his quest to stop the darkness and this debut issue was a trippy delight. Moore's art and Dave Stewart's coloring deliver one of the most jaw dropping and fantastic pages that I have ever seen.  I haven't read a ton of Surfer books, but this one has my attention.

The Rest:
The Batman Who Laughs #6 - We are one issue away from the conclusion to this intense mini-series featuring Batmen from all different worlds, including the Batman who uses guns and won't hesitate to kill, the Grim Knight. Batman had been poisoned with Joker serum and is currently fighting his transformation. In a desperate attempt to save Gotham, Batman realizes that he must fully transform and take on the Joker on his own. This has been a dark mini-series and it has been fun to read a Batman book written by Scott Snyder again. I am not a huge mulitverse fan, but this series has been fun and I am looking forward to its conclusion.

Darth Vader: Dark Visions #5 - This mini-series of one shots has been a lot of fun and has allowed for some creative flexing when it comes to the Star Wars universe. What is a simple story of Vader tracking down a rebel comm device, turns into a horror movie as Vader pursues a helpless rebel across a hellish landscape. Geraldo Borges produces some of the most horrifying images of Vader I have ever seen as the rebel is hallucinating thanks to some poison thorns he encountered.  I have loved the horror element in this mini-series and would love to see the collected edition with some bonus art. This is a must read series for Star Wars fans.