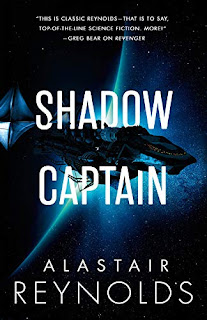 There's something in the dying (or at-least-super-old) Earth subgenre that has always resonated with me: a storyworld littered with weird and wondrous leftovers from times so far past that people are not quite sure what to make of them. In those stories, the massive weight of history hangs over the world and makes it alien in a very specific way. There's an intriguing contrast to our own situation in history where we (at least think we) can understand everything in sight better than our ancestors ever could, and there's (as far as we know) no unrealistically advanced technology we can dig out and play with without really grasping it. What a bummer.

In his Congregation series, Alastair Reynolds transposes the core of this subgenre into space. The human civilization is millions of years old and has gone through a number of different phases known as 'occupations'. Some of them left behind strange artifacts like big skulls that can be used for communication between spacecrafts and weapons defying the laws of nature. These objects are then scavenged from artificial mini-planets or 'baubles' that are normally closed but open at certain intervals to let daring adventurers in. Small spaceship crews of relic-harvesting semi-pirates try to make a profit by rushing in and taking what they can before the baubles close again – hopefully steering clear of actual pirates who are ready to kill you and take your cargo, or worse.

It's a rich setting filled with manufactured worlds, robots, alien races, spaceships with massive sails, and a mystery around 'quoins' that are used as currency, so there's a lot of storytelling potential. Reynolds is working on a trilogy set in the Congregation, and his new novel Shadow Captain continues the story of the Ness sisters Adrana and Arafura who in the first book Revenger escaped from their home planet in order to start a life of spacefaring adventure.

It didn't go as planned, of course, and Adrana was captured by the murderous space pirate Bosa Sennen. Revenger followed Arafura who tried (and finally managed) to free her sister, losing parts of her body and personality in the process. Arafura became rather murderous herself during the course of the book and finally killed Sennen and took over her pirate ship.

In Shadow Captain, we continue from there. Now the protagonist is Adrana who is suspicious of her sister's new Sennen-like behavior. On the other hand, Adrana herself was held by the pirate who intended to transform her into the next incarnation of Bosa Sennen with the technologies of tomorrow. So, Adrana and Arafura both seem to have features of Sennen in them, and this conflict is driving the plot forward for much of the book. In addition to them not being able to trust each other (or even themselves completely), they find out that their ship is being followed by a mysterious vessel which should be impossible.

This is the canvas for Shadow Captain, and its noticeably smaller than its predecessor had. The small crew lead by the Ness sisters is confined inside their spaceship (plus the occational bauble) for the first half of the book, trying to get their hands on necessary resources, planning for the future and being skeptical of each others' intentions. This is quite different than Revenger, in which we got to see several weird worlds and plenty more action, but Reynolds is not bad with the thickening suspense either.

My main criticism is that the other crew members are quite forgettable characters and they could have been spiced up quite a bit. Adrana is probably meant to be a little more adult version of Arafura, but to me she just felt like a more passive and frankly boring character. The book doesn't really get going until they make their way to a backwater planet for supplies and treatment for an injured crew member.

Finally, there's action, weird worlds and answers for mysteries, so I guess I got mostly what I wanted. Still, there's no hyper enigmatic adversary this time (just an enigmatic one), or same kind of a clear purpose that would be driving the main character forward. I was hoping for a little more energy in the book, even if it's still definitely worth your time and will hopefully set the stage for the final book that will – fingers crossed – be swashbuckling as hell.

Bonuses: +1 for the most amazingly fascinating fictional universe in recent memory

Penalties: -1 for not living up to Revenger in some respects, -1 lack of energy here and there

Nerd Coefficient: 6/10 – "still enjoyable, but the flaws are hard to ignore"