Microreview [book]: The Hound of Justice, by Claire O'Dell

The Hound of Justice ably continues the fantastic story of Dr. Janet Watson and Sara Holmes in a darkly plausible near-future Washington D.C. 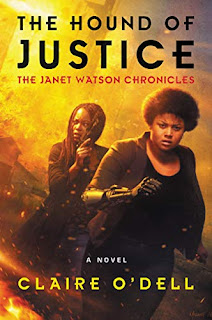 By the end of A Study in Honor, the first in Claire O’Dell’s Janet Watson Chronicles, the writer had established the parameters of her world, introduced our two main characters in full, Dr. Janet Watson and Sara Holmes. These two queer women of color as posited are indeed this world’s versions of the classic detective duo, in a near future 21st century Washington D.C, where America, after the divisiveness of a Trump administration is wracked by something even worse: A new Civil War. The two meet, and a first step toward Watson engaging with the war-torn past that cost her an arm is the central mystery at the heart of that novel.

In The Hound of Justice (yet a second novel title in homage to Doyle)., Dr. Watson’s story continues.

The novel has a whopper of an inciting incident to get things off. It’s not much of a spoiler to say that the novel begins with a bombing during the inauguration of a new President, one that came to power in the wake of the events of A Study in Honor. This soon ramps up into a mystery, as patients at her hospital soon start mysteriously dying, even as she herself is struggling to be accepted as a surgeon with her new advanced artificial arm. This plot tension reflects and refracts Sara Holmes’ own struggle. The aftermath of the first novel has not beens salutary for her espionage career prospects, and that relationship tension informs and infuses the plot. Finally, when the game IS afoot, both are drawn into another mystery revolving around the ever present Civil War.

The milieu as created by the author is also a highlight for me. What I really liked in the worldbuilding in this novel was the throughline of having the war come to Washington D.C, and then, in the course of the novel, Watson and Holmes journey into the dark heart of the war zone, into the New Confederacy. What would the U.S look like riven by the faultlines of a new, modern Civil War? I found the author’s vision of what that would look like in practice to be all too plausible and chilling. The main characters are drawn into the dark heart of the conflict and it is, frankly, harrowing and all too much resonant. This is a vision of America I hope remains firmly in the science fiction aisle of the bookstore. It’s almost too painfully plausible, richly detailed and it evocatively comes across the pages.

And yet it is Watson’s journey and development that really is the central portion of the novel. The dark and richly textured world is one thing, it is the mindset and the journey of Watson that really counts. That aforementioned inciting incident is a dagger to the heart of someone who is dealing with the very real demon of PTSD and the aftermath of her experience at the battle of Alton. The author captures how Watson has to confront the “war come home” as well as how the journey into the dark heart of the war affects her protagonist. And even wrapped up in all that is all that else is going on in Janet’s life. The world is a complex mosaic, and even with the Brotherhood of Redemption, Sara Holmes’ future, and Watson’s work struggles, there is a potential romance, her relationship with her family and much more. This is a novel whose primary, first focus is on the relationships and internal growth and struggles of the protagonist, to equal or maybe even greater degree than the author’s previous novels. This is science fiction for readers who want to engage deeply with a main character they can get to know on an intimate, personal level.

The novel doesn’t stand well on it’s own, if this has intrigued you to this point, I strongly recommend picking up A Study in Honor. It’s not so much the plot that you need to catch up on (which can be summarized and gets referenced back a couple of times in the novel), it is the emotional growth and development of Watson as a character that makes the first novel absolutely crucial to enjoying this one to the utmost.

The novel ends with Watson at a turning point, and a whole new potential hook for a mystery in the bargain. It’s a complete story, don’t get me wrong, but even more than the first novel, this novel is clearly setting up for a potential follow up as Dr. Watson’s story continues. I for one am eager for another Janet Watson novel.

Bonuses : +1 for a very strong focus on Watson and her personal story.
+1 for a darkly immersive near future world

Penalties : -1 for a slight weakness of the actual mystery as opposed to the rest of the novel’s merit