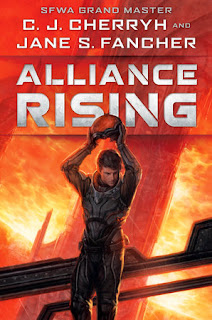 Alliance Rising marks the return of C.J. Cherryh to her Alliance-Union Universe. It's been ten years since the publication of Regenesis, and since then she's published nine more Foreigner novels, but it's been a long wait for Alliance-Union fans. Alliance Rising is the earliest novel set in the timeline. Set on the cusp of the Company Wars, there are plenty of references for long time Cherryh readers: Pell Station, Cyteen, the azi and the Emorys, the ship Finity's End and its captain JR Neihart. Put together, the novel is grounded in a particular time and the edges of a setting that many readers are well familiar with even though no prior knowledge is required.

This may be an odd comparison to make, but the experience reading Alliance Rising put me into mind of reading L.E. Modesitt, Jr.  There is a certain comfort to returning to her universe, but the primary reason is how Alliance Rising is structured.  Alliance Rising is a long, slow burn of a novel with set up piled on top of set up and wrapped around some characterization and garnished with some more set up. It's not that dry, but much of the novel is a combination of local politics mixed with the implications of galactic politics on the verge of hitting home hard. A very significant portion of the novel is tied into building those political blocks into a tinderbox on the verge of an explosion. It's only the last act of the novel that races into that explosion and the fallout. That's a description that, with the change of one or two details, describes the plot of structure of Modesitt's fantasy epics.

The difference, of course, is that Alliance Rising is very hard science fiction and not an epic fantasy, but here that means the scale is galactic.

Alpha Station was the first station created by Earth / Sol before Pell and Cyteen basically founded themselves and splintered off. This is a station and a setting with lots of rivalries and lots of bad feelings and mistrust between stations and even towards Sol.

The early going of the novel focuses on both the politics of Alpha Station as well as the merchant ships which form the lifeblood of Alpha. Station politics is such that the massive faster than light ship being built is viewed as either being vital to the future of Sol and Earth Company or a giant suck on the resources and culture of the station. The surprise arrival of Finity's End, a legendary faster than light ship crewed by one of the oldest of merchant families, has the station in an uproar. Is this the first step of an incursion from Pell and Cyteen, an opportunity for Alpha, a strike against Sol, something else?

Alliance Rising is all about trade deals and, not to lean too heavily on the title of the novel, alliance building. Finity's End is on Alpha station to build an alliance of merchant ships into an intergalactic force (this may be a small spoiler to readers new to Cherryh, but it is also a central point to an ongoing series some forty years in). From the Stationmaster of Alpha to the captains of the Galway, Finity's End, Firenze, and every other ship on station, everyone is looking to make the best deal to protect their own future, and firmly in the middle of all that is the Earth Company built ship The Rights of Man.

It is very likely I'm not conveying this well at all, but in the hands of Cherryh and Fancher, this is gripping stuff. More than half of the novel is spent settling in, giving the reader an opportunity to live on Alpha, to really get to know Ross Monahan from Galway and, as much as possible, Jen Neihart from Finity's End. Through that younger generation readers see the absolutely loyalty of crew to their ships because the ship and the crew are family in truth. Family is the beating heart of the novel.

Alliance Rising serves to whet the appetite, not just for the second novel in the Hinder Stars sub-series but also to visit and re-visit the full Alliance-Union backlist of novels.

Bonuses: +1 for the details of ship history, legends, and the trading of patches

Penalties: -1 because the novel can be a touch dry at times