My comic book New Years Resolutions are not going as well as I would prefer.  I am making an effort to read more indie comics, but my attempt at supporting the DC Cinematic Universe is failing. I plan on seeing Shazam this week, but still haven't watched Aquaman despite its recent release on home video.  I have watched Captain Marvel (it was great) and the family and I have begun working our way through the Marvel Cinematic Universe in preparation for Endgame, but attempting to conquer the DC movies just feels like work. 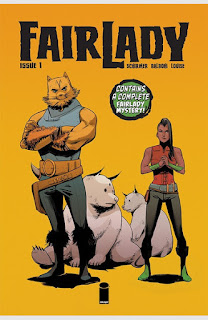 Pick of the Week:
Fairlady #1 - Jenner Faulds posed as a man in order to fight in the War of the Harshland, but following the conclusion of the war soldiers are having a hard time re-entering society. A good number of soldiers have become investigators known as Fairmen. Faulds is the only Fairlady, but has to settle for the cases that nobody else cares about. She resides in the Feld, a town built around the body of a fallen giant robot. In her first case, Faulds is tasked with tracking down a missing woman who made off with some money. In her quest to find the woman, it is learned that she took the money from powerful men as a Robin Hood-esque attempt to right some of the wrongs of the world. Fairlady is a beautiful book that has really piqued my interest to see what other cases Faulds will solve and what their connection to the Feld they will have. If you only read one book this week, I encourage you to check out this title from Brian Schirmer, Claudia Balboni, Marissa Louise, and David Bowman.

The Rest:
Prodigy #5 - Mark Millar's book about super genius Edison Crane is racing towards its conclusion and this issue provides the reveal on the real threat that the world is facing.  Crane was able to decipher a clue that was left thousands of years ago following a time travel mishap from a group of aliens who want to eventually take over the earth. The stranded time traveler carved the blue prints for a device that will serve a bridge to their plant in a temple, but that temple is currently occupied by terrorists with a bomber en route.  The solution is to send Crane and his photographic memory through the temple and memorize all of the carvings while dealing with the terrorists and escaping before the bombs hit.  Millar has really built Crane into a superhuman, but we start to see some cracks in the facade of the professor and the twist at the end of this book is setting up an epic conclusion.  I have been back and forth on this title, but it is definitely a lot of fun and this has been the best issue in the series thus far.

The Batman Who Laughs #4 - Bruce Wayne is finally getting close to uncovering where Joker has the portal that is bringing alternative Batmans (Batmen?) to Gotham.  While there is something nostalgic reading a Scott Snyder Batman book, the art of Jock is what really makes this book something special. This mini-series is getting close to its conclusion and the Joker uses the fear of the Batman who Laughs to turn the police against the real Batman.  After nearly saving Jim Gordon from another dimension, Batman is going to have a hard time returning the various Batmen and Robins to their rightful home and rescuing commissioner Gordon.  Snyder has been emphasizing Batman's code of not killing so I am curious if Batman will be able to honor this in the end.