A long time coming, but worth the wait 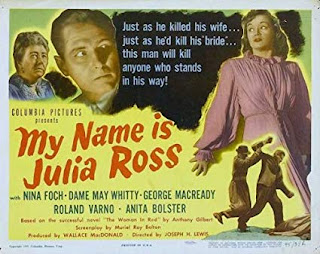 Out of the ashes of the late, lamented FilmStruck streaming service, comes the Criterion Channel. When it launched this month, the Criterion Channel came out of the gate with a showcase of Columbia Film Noir, and one of the films included was 1945's My Name is Julia Ross. Since 1945, the movie hadn't been easy to see. I found out too late that it had been included in a retrospective at one of the art house theaters here in LA about a decade ago, but it never had a home video release of any kind until it was briefly issued in a box-set of backbench noir films issued by Turner Classic Movies in 2011. I missed that one, too. But the retrospectives had the effect of creating a kind of aura around this film   one of the great noir films you couldn't see. It was referenced in DVD commentaries and articles about other, better-known noir films, but was itself hard to put your eyes on.

It certainly didn't help matters that the lead actress, Nina Foch, told me in her 80s that it was one of her favorite roles, even more than the film for which she was nominated for an Oscar. Nina taught for decades at USC, and was an inspirational figure for hundreds of students like me throughout the years. So why couldn't I see her favorite role?!?!

So, thanks, Criterion Channel. Plus, watching this movie in 2019 offers additional joys that it maybe wouldn't have had I caught it at that retrospective all those years ago. Because My Name is Julia Ross is about gaslighting. We get the term "gaslighting" from the 1944 George Cukor movie Gaslight (the most popular rendition of a story that began on the stage in 1939), and I'm here to tell you folks, the term should be "Julia Rossing." I think My Name is Julia Ross is the better movie (produced with a tiny budget and with only a 64-minute running time), and for a number of reasons.

Here's the plot: Julia Ross, an American living in London, answers an ad for a personal assistant for Mrs. Hughes, a wealthy old widow with an adult son, Ralph. Julia gets the job. After Mrs. Hughes sends Julia away with some money for shopping and packing her things, she tells the woman staffing the temp agency that they can close up shop. Like, all the shop. Like, disappear. So what's up? Julia reports for work, and wakes up in an entirely different place, surrounded by Mrs. Hughes, her son, and the servants, who all call her "Marion," Ralph's wife. They tell her she's been ill, and confused, and she never was any "Julia Ross." She's been there at the seaside house, recuperating, for months. So we know the Hughes family is trying to brainwash her, but to what purpose? 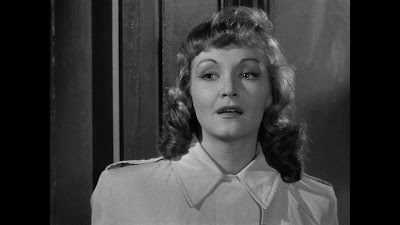 What makes this movie so awesome, apart from Nina's performance that really anchors us to Julia and a Gothic-noir atmosphere, is that Julia is always herself, and always fighting. I have a number of issues with Gaslight, from Charles Boyer's performance to the way in which Ingrid Bergman's Paula character is written in a fainting, sort of damsel-in-distress manner. But Julia Ross don't play. I kept worrying that her derpy boyfriend, left behind in London, was going to be maneuvered into saving her, but I needn't have been concerned.

This movie was killer in 1945, and through the machinations of social discourse in 2019, it has additional resonance and a hero we are happy to root for.

Bonuses: +1 for Nina Foch's magnetic performance in the title role; +1 for a kick-ass heroine who isn't here for these rich people's legal problems; +1 for taking the noir out of the gutter and sticking it in a Gothic setting

Penalties: -1 for the 64-minute running time

Cult film Coefficient: 8/10, well worth your time and attention

Posted by Vance K — co-editor and cult film reviewer for nerds of a feather, flock together since 2012, Emmy-winning producer, and veteran of two semesters with Nina Foch.
Posted by vkotrla at 12:00:00 AM