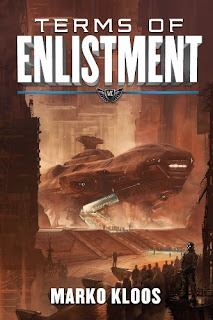 Terms of Enlistment is the debut novel from German SF writer Marko Kloos. It was originally self-published, then picked up by Amazon's 47North imprint. Since publication in 2013, Kloos has essentially written a sequel per year. The series is highly regarded by fans of milSF.

I first became aware of Terms of Enlistment in 2015, when its sequel, Lines of Departure, was (a) included in the sad/rabid puppies Hugo slate and (b) subsequently withdrawn from consideration by Kloos because he's not a culture warrior. This piqued my interest, so I made note to read the series. Four years later I have finally done so, and am happy I did. Terms of Enlistment is a well-made milSF novel that is sure to appeal to fans of the style - and would also serve as a good introduction for new readers.

Terms of Enlistment tells the story of Andrew Grayson, a self-described "welfare rat" who enlists in the North American Commonwealth (NAC) military to get out Boston - which, in the year 2108, is essentially one giant housing project. After basic training, he is assigned to the Territorial Army, tasked with keeping the peace in the welfare cities of the NAC. This is a setback for Grayson, who yearns to leave Earth and patrol the outer colonies, where the NAC and rival Sino-Russian Alliance (SRA) tussle over terraformed colony planets.

After a peacekeeping mission in the Detroit welfare city goes horribly wrong, Grayson is transferred to the Versailles - an aging starship tasked with ferrying supplies to the NAC's far-flung colonies. Not long after they arrive, however, the crew of the Versailles makes a horrifying discover - humans are not alone in the universe, and our neighbors are not exactly looking to make friends...

If this sounds familiar, it's probably because it is. Terms of Enlistment evokes the classics of the genre - and both Starship Troopers and Old Man's War specifically. It is neither as grandiose as the former nor as subversive as the latter. But Kloos is a veteran, and there are little details throughout the book that add an authenticity to Grayson's experience that make it stand out in a crowded field.

World-building is solid throughout. The NAC is basically the United Space of America, but this makes far more sense in the context of a divided Earth than it does when Earth is united. Kloos also does a good job portraying alien lifeforms. They feel suitably, well, alien.

And overall, Terms of Enlistment is a well-paced and fun adventure story. There is enough action to keep the reader engaged throughout, and mercifully little of the battle fetishism or tedious he-man posturing that mar the Baen-esque version of the style. Meanwhile, Grayson is a likable protagonist, though I would have liked more in the way of character development. Presumably that comes later in the series, but Terms of Enlistment would have benefitted from a deeper look inside his head.

Kloos' writing is clean and efficient - the kind of prose that fades into the background until you barely notice it anymore. Basically, it's "TV ready" fiction. More than once, I found myself thinking how well Terms of Enlistment would work on that medium. On balance that's pretty good - and way above average for milSF, which is not exactly the most literary of SF subgenres.

That said, there is too much infodumping for my tastes. The individual infodumps are relatively painless on their own but are made worse by the fact that the narrative is written in first person. If Terms of Enlistment were written in past tense, then I could imagine the narrative as a memoir written with future audiences in mind, but it's not. Instead, we have access to Grayson's innermost thoughts and he...explains basic politics as if addressing a tourist from another place and time.

The best SF writing, in my opinion, immerses you in perspective. It presents time and place as lived reality, exotic though it may be. It assumes that readers are smart enough to follow along, and to figure out by observing - to learn, for example, that thermobaric grenades are dangerous just by seeing them explode. By addressing the reader directly, infodumping breaks the fourth wall and shatters the suspension of disbelief. Its presence did not ruin my enjoyment of Terms of Enlistment, but as far as I'm concerned, the book doesn't need it and would have been better without it.

It is easy to see why the puppies liked this novel, and why they misdiagnosed Kloos as friendly to their cause. Recall that the puppies claimed that recent Hugo nominees were too literary and overly focused on political messaging (while also charging that progressives manipulated the nominations process to promote these works and freeze out conservative-leaning ones).

Terms of Enlistment thus seems to embody their ideal of what a Hugo-worthy book should look like. It is unabashedly genre fiction - well crafted, to be sure, but with no literary pretensions or political ambitions. And it certainly emphasizes story over message. Furthermore, while it not conservative "message fiction," there is a certain normativity to the book, and to milSF more broadly, that could easily be reconciled with a conservative worldview. For example, while the NAC's welfare cities could be interpreted as a critique of war capitalism, they could also be interpreted as a critique of central planning and reliance on government handouts. The ambiguity seems intentional to me, but readers will likely read their biases into the text.

Political ambiguity can be a good thing. In his Culture series, Iain M. Banks presents us with a utopia, but then explores the Culture's imperialist tendencies. We are thereby invited to sympathize with the Culture but also to feel uncomfortable as it meddles in the affairs of neighboring societies - typically without gaining consent.

Terms of Enlistment, by contrast, seems like it's trying to avoid having a political conversation altogether. For example, early on in the book, Grayson's brigade is called on to quell a riot in the Detroit welfare city. When they get there, they find mysteriously well-armed and organized adversaries shooting at them from apartment buildings. In response, Grayson commits what is in essence a war crime - firing a thermobaric grenade into a building full of civilians.

This would be a fascinating moment to explore - not because I think soldiers should be conflicted about taking civilians lives (though I do), but because I've read enough war memoirs and spoken to enough veterans to know that they often are. But Grayson doesn't really dwell on what he did. Instead, we are told that it's okay because he was being shot at, and because he loaded the thermobaric grenade accidentally. Later, we are encouraged to sympathize with Grayson and despise the "pencil pusher" who wants him to take the fall for the civilian deaths.

Look, it's not that I think individual soldiers bear the primary responsibility for crimes of war. Sometimes they do, but more often they do not - command responsibility is a well-established principle in international law and the rules of engagement that most nation-states adhere to. So ultimate responsibility does lie with policymakers. And the pencil pusher is no idealist - he's just covering the NAC's collective ass. But Grayson's shrug emoji reaction strikes me as a missed opportunity to both explore his mindset and raise some interesting moral questions.

(There is another example of this later in the book, but I won't mention it here because spoilers.)

All that said, I don't want to overemphasize the things I took issue with. On balance, I really enjoyed Terms of Enlistment. It's a fast-paced, fun and well crafted book that kept me glued to the page and got me excited to start on the sequels. It is undoubtedly a good book - just one that falls short of greatness.

Bonuses: +1 for fast pace milSF fun; +1 for authenticity in the details of a soldier's narrative.

Penalties: -1 for infodumping in present tense; -1 for avoiding the tough questions it raises.