End Game is finally here!  I have my tickets to see it Sunday morning and have muted specific terms for the first time since I joined Twitter many moons ago. Early reviews for the movie are good and I am excited to watch this phase of the MCU reach its epic conclusion. May you all have a spoiler free next couple of weeks. 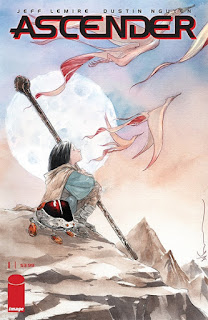 Pick of the Week:
Ascender #1 - Set 10 years after the conclusion of Descender, Jeff Lemire and Dustin Nguyen return to the world they introduced us to five years ago.  The Harvesters have purged the known universe of all robots and technology. The Mother rules all with an iron fist and has enslaved many planets. She wields a powerful magic, but there is a rumor of another magic user that is haunting her. Hope comes in many forms, and Mila appears to be that force in this book. Her mother died for her so that her father and her could be free. Freedom sounds good, but it essentially means they are outcasts who are forbidden to interact with the "saved", those who have pledged devotion to the Mother. Lemire and Nguyen do a masterful job introducing the reader to this universe and setting the stage for competing factions as the resistance seeks to bring back technology and free everyone from Mother's rule. This really makes me want to revisit Descender as I am embarrassed to admit I never finished.

The Rest:
Criminal #4 - Ed Brubaker and Sean Phillips continue to produce the goods with another stellar issue of Criminal. This issue provided us a night from the perspective of Ricky Lawless, complete with cocaine use, murder, bar fights, and some of the worst impulses that a human could have. You start to feel a bit sorry for Ricky, who is driven by the death of his father and has relatively good intentions. The death of Teeg Lawless was mentioned in the first Criminal story and at the end of the book Brubaker and Phillips let us know that we finally get to hear how it all went down in the next issue! I cannot recommend this series enough and remain impressed at how fresh Brubaker and Phillips keep this series after so many years and so many tales.

Redneck #19 - Following the horrific events of the last arc, Bartlett and his family are at the end of their ropes and desperate for help. They were told of a man that could help them, but it would come with a cost. This brings the family south of the Texas border and among the dead in the Asilo Del Muerto. We are teased with who this new individual is, Senor Carrona, but Donny Cates promises that we will get to know him better as this new arc unfolds. There is something unsettling watching the vampires leave Texas and the Bowman clan should be afraid at what Bartlett is plotting with Carrona.  Very excited about this new arc!

Star Wars: Vader Dark Visions #3 - In the most bizarre book in this series, we are introduced to a nurse on the Death Star with a creepy infatuation with Vader. The book opens with the appearance of a simple crush, getting nervous when he is around and daydreaming of the two of them together, but it quickly goes beyond a simple crush as we learn she has a collection made up of blood and other bodily items that she found cleaning up the operating room. As I type this it feels like this book shouldn't exist, but thanks to the magic of comic books we have Fatal Attraction set in the Star Wars universe. The difference is that Vader is not one to put up with this type of infatuation lightly.

Doctor Aphra #31 - When we last saw Triple-Zero and Aphra and their attempt to deactivate the bombs they had been implanted with, Triple-Zero was ready to give up and walk away from it all thus triggering the proximity bombs. Thinking quickly Aphra revives Beetee-One, thus sparking a brief moment of joy in Triple-Zero and giving him the will to live. While this hasn't been the best arc in the series, it has been pretty fun and reminds me how important the droids are to this series. Towards the end of the book Beetee-One comes in very handy and returns to his harbinger of death form and quickly dispatches of a group of storm troopers. I feel I am getting to the point of dropping this title and wonder if it would have been better as a mini-series following her debut in the Vader series.