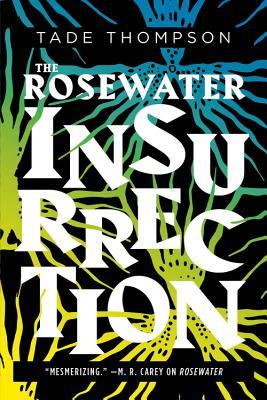 Reviewer's Note: This is a review of the second novel in the Wormwood trilogy, so spoilers for the first novel should be expected. If you haven't read Rosewater, you should do that first because it's excellent, but The Rosewater Insurrection does an admirable job of bringing a new reader up to speed. While I never recommend jumping into the middle of a trilogy, it could work in this case. Either way, the spoiler-free review of The Rosewater Insurrection is that it's action-packed and slightly weird, but doesn't quite live up to the previous novel. 7/10. Last warning, spoilers for Rosewater will follow.

Following the events of Rosewater, The Rosewater Insurrection follows a handful of different perspectives as the city of Rosewater continues to act as host to an invading but seemingly benevolent alien. What the residents of Rosewater don't know is that the alien is just a "footholder" for a subtle but complete invasion as aliens essentially download themselves into human bodies. While this starts to take shape, the government of Rosewater declares its independence from their host county of Nigeria, which turns all eyes inward at a time when the alien is going through some changes.

Where Rosewater largely followed Kaaro, The Rosewater Insurrection makes Kaaro a secondary character to several others, such as Aminat, the alien avatar Anthony, and other characters more central to the plot. The multiple perspective changes serve to give a more complete picture of what's going on within the city of Rosewater than the singular perspective from Kaaro, but the non-linearity of perspective and the expanded cast is a lot to keep track of sometimes. The point, however, is that Rosewater is the focus of the story moreso than any one character.

While this hopping around might make a novel feel jittery or uneven, The Rosewater Insurrection progressively and competently builds to a crescendo that mostly pays off. Like the previous novel, this one suitably combines the near-future with weirdness and it's still fun the second time around. It does pull some stuff out of its pocket that feels like rewriting continuity a bit, but I'm excited to see where the next novel goes.

Penalties: -1 Lots of moving parts to keep track of