My fellow nerds who ventured into the world of SDCC hotels are hopefully receiving confirmation that they got the location of their choice for this year's 50th anniversary of SDCC.  Meanwhile I am counting down the dates until the premiere of NOS4A2 on AMC. What AMC has shared with the public up to this point has me very excited that Joe Hill's creation will have a faithful adaptation to the small screen. 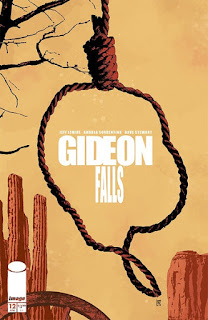 Pick of the Week:
Gideon Falls #12 - The new arc is upon us and we are treated to some of the history of Gideon Falls and the origin story of the Black Barn and the evil with in. It all began in 1886 when a serial killer named Norton Sinclair had killed 13 people.  It is unknown if this is the same Norton Sinclair who was suffering from mental illness and questing for pieces of the Black Barn early in the series, or someone he is related to.  What is clear is that the evil, the man who laughs, is using Sinclair as a doorway between alternate realities.  Father Burke is in pursuit of Sinclair and understands that his religion may serve as a strength in confronting this evil. Jeff Lemire and Andrea Sorrentino really outdid themselves in this surprising new issue that is getting at the core of the evil in their creation.

The Rest:
Daredevil #4 - When we last checked in on Daredevil, he had just been rescued by no other than the Punisher himself.  After losing badly to detective Cole following a sting operation, it was looking grim for Murdock until Frank Castle surprised us all and unleashed a torrent of gun fire raining down on the police. In this issue we learn why Castle saved Murdock and the juxtaposition of Punisher vs. Daredevil plays out effectively as Murdock makes his case for his no kill policy.  Punisher follows a simple rule of math and figures that killing on bad guy saves the lives of many. The philosophical debate is capped with Daredevil making an exciting exit and pondering what is next for him as he attempts to clear his name. I remain impressed with the new creative team of Chip Zdarsky, Marco Checchetto, and Sunny Gho.

Morning In America #2 - I read the premise of this series, group of teenagers in 1983 small town USA investigate why their peers are disappearing, and I was intrigued. I am a sucker for a supernatural mystery that is nostalgic (Stranger Things, Paper Girls) and I am happy to say that this is an entertaining book. The book centers around a group of young women, known as the Sick Sisters, and their lives in Tucker, Ohio.  Tucker, Ohio is dealing with the issues associated with local industry jobs shutting down and the Sick Sisters are all dealing with the issues they face breaking numerous rules.  A classmate turns to them for help when nobody believes him when he describes some sort of monster that took his sister. The Sick Sisters go to investigate when they learn the police are actively trying to classify all of the disappearances as runaways.  While much lighter than Paper Girls and lacking a bit in the nostalgia factor up to this point, this series has been enjoyable and I look forward to reading more about what the Sick Sisters uncover. Props to author Magdalene Visaggio for giving us a diverse set of protagonists at the heart of her story.