Microreview [book]: The Pleasant Profession of Robert A. Heinlein, by Farah Mendlesohn

The Pleasant Profession of Robert A. Heinlein By Farah Mendlesohn proves to be an essential volume of genre criticism about one of the giants of the field. 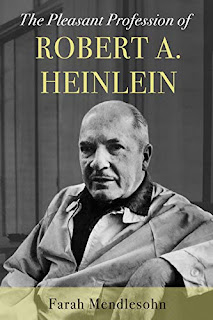 Heinlein was among the earliest science fiction I tried to read, when my age was barely in double digits, back in the early 1980’s. After my introduction to science fiction, I took to reading my 7 year older brother’s works. The cover with a guy seated with a kilt, surrounded by beautiful women--well, it attracted me quite frankly, and so the first Heinlein I tried to read was not one of his juveniles, not his short fiction, but rather, Time Enough for Love. I didn’t quite understand all of it, even as the premise on the back cover of that edition was completely wrong (Lazarus Long does NOT become his own ancestor!). It took me a couple of years to try again with Heinlein, going to his short stories first, and then as his work got reissued in the late 80’s, his novels. I also read my first piece of real genre criticism, Alexei Panshin’s Heinlein in Dimension, which covered his work until the late 60’s. I wondered if anyone had done similar criticism of Heinlein’s work after that (I Will Fear No Evil and subsequent books) but found nothing. Once I had finished reading Heinlein, I had let him lay fallow for a long time, with a couple of audiobooks re-reads as my only exposure to him. I had mostly moved on.

And so now years later, my interest in Heinlein reawakened with scholarship and thought about the man and his work, to point, the latest work of Heinlein scholarship, Farah Mendlesohn The Pleasant Profession of Robert A Heinlein. The title itself is a play on the Heinlein story “The Unpleasant Profession of Jonathan Hoag”. The book was crowdsourced to its publication, and a list of supporters is at the back of the book.

The question is in this day and age if there is a place for Heinlein criticism, even given the supporters who backed the book. Has the field moved on from him so much that his worth is not worth discussing? The author very clearly thinks otherwise and lays out her arguments in the book.

The book opens up with a short biography of Heinlein, which for me extended and fleshed out the story of Heinlein I had gotten from Alec Nevala-Lee’s Astounding: John W. Campbell, Isaac Asimov, Robert A. Heinlein, L. Ron Hubbard, and the Golden Age of Science Fiction². For the first time, the pieces I had, from Heinlein himself, from that book and others are now fused together to give me a better view of the man and his story. How his life influenced his fiction is very meticulously laid down¹. I personally learned a fair amount of about Heinlein's life. This biography provides a solid grounding for the reader in Heinlein's life story and prepares the reader for the rest of the book.

The real meat of the book, though, comes in the subsequent chapters. The author handles her analysis of Heinlein’s work by theme. Heinlein’s Narrative Arc, Technique, Rhetoric, Racism and more are the framework for her to explore Heinlein’s oeuvre multiple times from multiple points of view. There is even a chapter on Heinlein’s relationship with cats, and I did not quite realize the scope of cats in Heinlein’s fiction before reading this book. This does mean that a single work of Heinlein's, like Farnham’s Freehold, for instance, is discussed in detail in the chapter best suited to it, and elsewhere in the book at all. This thematic approach allows the author to discuss the writer’s oeuvre as a holistic whole with each section, rather than rabbit-holing down the stories and novels in succession. I found the index at the back of the book helpful, and the text itself signposts when the author intends to discuss a book in greater depth elsewhere in the work.

The author provides a nuanced and well argued point of view (and giving credit in footnotes where appropriate to people who have influenced her thinking on particular matters) and the book has made me reevaluate significant aspects of Heinlein’s work and his oeuvre for myself. In a world where Heinlein’s work has become a touchstone of divisiveness, Mendlesohn lays out what she thinks of it all, the good, the bad, the nuanced, and the ugly in Heinlein’s work.

As she says herself in the preface:


“The purpose of this book is to tease out what I find fascinating about Heinlein, good, bad and reprehensible, and to understand his work as a close-to-fifty-year-long argument with himself and those he admired.”

I maintain that Mendelsohn has accomplished this in spades. The Pleasant Profession of Robert A Heinlein is the most detailed and comprehensive look at the man and his work that exists today. Sometimes that detail goes a tad long on length, but any genre reader or critic who wants to grapple with Heinlein’s work would stand very well to read Farah’s work. Just like the aforementioned Heinlein in Dimension, this is a crucial piece of Heinlein scholarship that also makes the case that reading Heinlein can be and still is worthwhile. That’s no mean feat.

¹ The book is meticulously footnoted as well. Some of them are rather funny and I found reading all of them worthwhile.

Bonuses: +1 for meticulous analysis in a well reasoned point of view.

+1 for being cogent enough to persuade a skeptical reader like me about some aspects of Heinlein's work.

Penalties: -1 for maybe just a little too much overwhelming detail.