Another month gone means another roundup of the short fiction I've been reading. It's been bookended by a pair of horror collections that pushed me out of my comfort zone in the best possible way, while I catch up on the remainder of my Hugo short fiction reading and plug away on some more recent magazine releases.

Those who pay attention to these things will note we're rolling with a new - hopefully permanent - column title this month. This is both to distinguish this feature from those at other venues already having short fiction adventures (good ones!); and also to reaffirm the values of this column as comfy, easy to wear, and relaxed about the prospect of not catching 'em all. 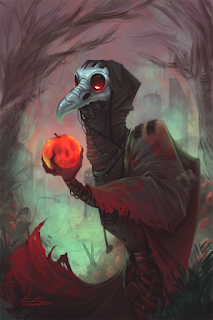 The first quarter of Strange Horizons brings a new ebook format which makes it a lot easier to look back through the fiction and non fiction entries. It's great, because viewing these stories as a whole monthly set often brings out commonalities in tone and style that complement each other even when they're not originally released that way. Opening January's offering is "2086" by T.K. Le (read online), a near-ish future government promises time travel in its election manifesto, and follows through by putting machines which mysteriously only show up in lower income, immigrant neighbourhoods. The protagonist's Bà Ngoại (maternal grandmother) is the most enthusiastic of the family about the new machine, but when she goes to visit it one night she doesn't come back in the way the family expect. This gentle haunting story is full of explorations of diaspora identity and the parts of people we keep close to when we grow up, as well as the wider political factors which inform how our world thinks about human value for immigrant cultures.

February takes us to some icy places, first with a group of unusually creepy clowns performing a ritual for a town trapped in endless winter by ML Kejera ("The Magician's Clown"), and then into the similarly chilly winter of an exiled Bohemian king for what feels like a purely historical - up until it isn't - story by Sarah Tolomie ("The Imaginary Palace of the Winter King"). Both bring a very different sense of place, linked by the season and by the feeling of lost tradition and standing in unforgiving worlds. The month's stories are rounded off by the weird and uncomfortable "Dem Bones" by Lavie Tidhar (read online), from which the cover image of plague masks and apples probably gives you all you need to know going in.

From March, the Samovar stories provide a nice boost to the amount of fiction content, although the sexual assault content in H. Pueya's "Saligia" (read online) was deeply off-putting. The standout for me, though, was "Truth Plus" (read online), a near future end-of-the-world tale by Jamie Wahls which punched right through my heart with its take on the ways we lie to each other in order to maintain hope in the darkest situations. It centres around two characters - a PR person and a scientist - involved in a project to save a tiny portion of humanity in the face of an incoming asteroid, while reconciling their former romantic relationship and learning how to take comfort in what their connection has now become. 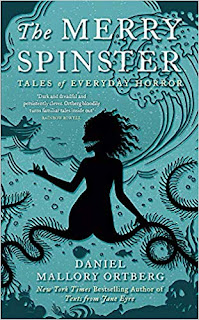 Reading the reviews on the back of this book, I am told that Ortberg "has a knack for knowing where in fairyland the bodies are buried", and that definitely comes across in this collection. However, the horror that most deeply struck me was the heart-tightening feeling of inescapable abuse in many of his tales. Particularly towards the end of the collection, the stories draw their horror from main characters who are trapped in cycles of manipulation and misery from supposed friends, and it's not clear whether we should be relieved or disappointed to be past the earlier stories about main characters who are often-gleeful abusers and occasional murderers of the hapless beings around them. The mode of telling is mundane and often quite wry, which adds to how jarring its more weird and vicious moments are. There's also several subversions of the gender binary, particularly juxtapositions of male pronouns and female familial positions, usually daughters. This requires a further recalibration and adds to the disorientation until we do so, forcing us to think about about what makes a story about "a daughter" different from a story about "a girl", often reinforcing the sense of powerlessness within the family unit, as in "The Thankless Child", "The Merry Spinster" itself (a Beauty and the Beast retelling), and the skin-crawl-inducing rape apologist analogy of "The Frog's Princess".

Ortberg notes the inspirations from each story at the back of the book and it's interesting to see the breadth of stories being drawn from and mashed up here. From the Brothers Grimm to the Velveteen Rabbit to, of all people, Thomas Aquinas, this isn't just a collection trading in on some "hey, older versions of fairy tales are grimmer than the Disney editions, who knew" line, but something much broader and more interesting. Not everything here rises to the occasion individually, but put together, it's pretty relentless, while staying away from being too gratuitous or silly. It's absolutely not going to change your mind if you're not already partial to the nexus of horror and fairytale - but if you are, it's one to check out. 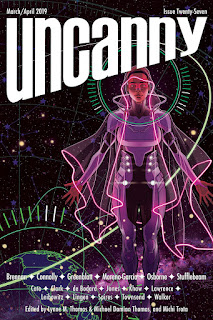 There's a lot of love and broken hearts across the stories in Uncanny this issue, including a couple where the genre elements are quite subtle and understated compared to the relationships at the heart of the narrative. In particular, Bonnie Joe Stufflebeam's "Every Song Must End" isn't a corner of genre I get on super well with - a slice of life poly romance whose main speculative element is a potential move to Mars for one of the couples involved, while storms ravage the earth the protagonists are stuck on. Despite that, the vignette style - each section even has its own soundtrack song - is evocative and although the genre elements didn't need to be genre elements, the imagery of storms and of escape to faraway planets at add an interesting dimension to the protagonists' lives and bring tension into the shelter and comfort they find with each other.

The theme of lost love is carried through highly accomplished stories by Silvia Moreno-Garcia - "On the Lonely Shore", also featuring the call of the ocean - and  A.T. Greenblatt: "Before the World Crumbles Away", also featuring queerness and a great, if unrealistic, view of a dying world. The story that made me gasp most inappropriately on the train was Marie Brennan's "Vīs Dēlendī", the first fridged woman story in a long time that didn't make me furious about what could have been. Set in a tradition-bound magical university, the story opens a tiny window into a world whose opaque rituals are taken by surprise by a student inspired by a folk tale (one recognisable to Earthly audiences too) into a never-before-seen act of magic that will secure his place at the highest levels of the academy. The inspiration for Harrik Neconnu's act is Voland, an outstanding female student accidentally killed by an overconfident male classmate. Now being harnessed to the desires of yet another supremely confident man, Voland ends up with the final say on her fate, however, bringing this attempt to harness obsessive love - over twelve months and a day - to a bleak, clinical close. 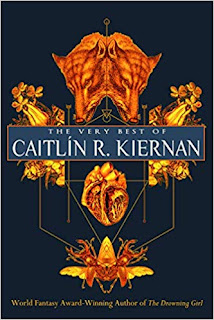 I've read a couple of Kiernan's longer works at this point. The Drowning Girl, I liked; Agents of Dreamland passed me by. She looms large in my mind as a figure with an enormous catalogue and influence, who I haven't engaged with fully but want to see more of. Alas, nothing quite prepared me, delicate non-horror reading snowflake that I am, for the adventures in gore, weirdness, body horror, sex and mundane hopelessness that pervades this collection of her best short fiction. A few days on, I don't feel equipped to translate my reactions to this rollercoaster of unexpected beauty, unapologetic queerness and distilled "oh, YIKES" into a coherent review. All I can say is, like all good rollercoasters, it left me dizzy and excited and desperate to go around again, even though I know the many, many moments during the experience itself where I just wanted it to be over.

The biggest strength of this collection is the range of images that slam straight through your defences, and it's those which have stayed with me more than any individual character or plotline (which are sometimes noteworthy and sometimes just there to hang said images on). For instance, the music teacher brought in to play a violin studded with ammonite shells - "The Ammonite Violin (Murder Ballad No. 4)" - or the journalist pushed into a horrifying guro-filled underworld of sex and mutilation in "A Season of Broken Dolls". Linear time is irrelevant in the story of a woman travels to Mars only to be locked in a mental institution while they attempt to unpick the horrors that ended her journey; in another, "In View of Nothing", the narrator's memory and concept of time is so disjointed that it becomes almost impossible to follow either her own reality or the story's, not that that holds anyone back. Lest you think it's all eldritch abominations and vaguely timeless historical moments, there's also stories with a more contemporary bent, like "Interstate Love Song (Murder Ballad No. 8)" and "Fairy Tale of Wood Street", which remind me of more recent writers like Margaret Killjoy in the best way (there aren't any dates in my copy of the anthology, but these stories almost certainly predate Killjoy's Danielle Cain novellas). I made more save-for-later highlights in this book than I have in any other title in 2019 so far. I come out of the other end wide eyed, hands clenched in hair, adrenalin spent and memories perhaps less reliable than they should be: this collection has done its job well.