Welcome to the final edition of Reading the Hugos: 2018 Edition! Today we'll be looking at the six finalists for Graphic Story.  By the time this goes live we'll be a full week past the close of voting and while I've thoroughly enjoyed covering as many categories as I have, I'm ready for the reading and voting stage to be done. It's a lot, even when it's something I love to do.

Two works on my nominating ballot are here on the final ballot (Bitch Planet and Paper Girls), but the category as a whole is soli and filled with interesting and strong works. Like the novella category, though, Graphic Story is fairly dominated by one publisher: Image Comics. With four of the six slots, Image has a fair lock on the category. As great as Image is and how fantastic the comics, the category will be stronger if a wider variety of publishers are represented in future years (though, three of the works on my nomination ballot were also from Image - so there's that)

On to the finalists. 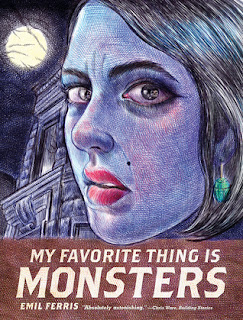 My Favorite Thing is Monsters: I almost read this earlier in the year when it was on the longlist for The Tournament of Books and had it made the short list, I would have read this in February and I would have unfortunately discovered that it really isn't for me. I'm uncertain how to talk about the book or even how I responded to it. For the first half or so of the book I was trying to piece together what story Ferris was telling. It's ambitious and multi-layered. I mostly understand why it has left a mark - but the combination of the storytelling and art style is just opaque enough that I struggled to engage with My Favorite Thing is Monsters as a story. 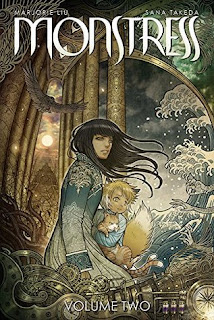 Monstress: Sana Takeda's art remains top notch, but something about this book has me somewhat less interested this time around than after the first book. I rated this one 4 stars on Goodreads, but the farther away I get from reading it the less of an impact that it has for me.

Black Bolt: Being a reasonable comic book nerd, I was moderately familiar with the Black Bolt character, but he was always at most a side character in someone else's story. Not being a reader of any of the books he was semi-featured in, I didn't have much of interest in picking up this one until it made the Hugo shortlist. This was a perfect way to step into Black Bolt's story. It pulls back his powers, gives him a voice (for a moment) and gets him away from the rest of the Marvel Universe. Saladin Ahmed's writing is spot on, it hooked me from the start. There is smart writing and smart storytelling all over Marvel comics, and Saladin Ahmed's is among the best. 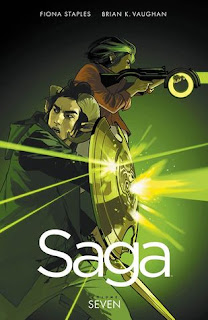 Saga: Hazel is back with her parents and, surprise, nothing goes as planned. To be fair, I'm not sure any of the characters here have a plan beyond survival, rescue, and escape. Saga is a lovely story, filled with horrifying weirdness, humor, violence, affection, and terror. We're seven volumes in, but I'm not sure there is an endgame in sight. There are, however, ends in this collection involving one of my favorite characters. This isn't the best of the Saga collections, but saying that is only a faint damn because less Saga is still quite good. 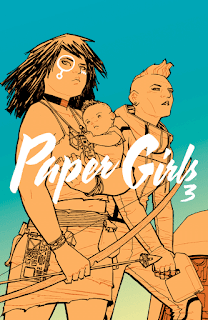 Paper Girls: In the least original take I can offer, Paper Girls is hitting so many of my nostalgic buttons in the same way that Stranger Things is doing so - and like Stranger Things, it's doing so with strong storytelling and originality (while tied with that nostalgia). I loved the time travel back in time to a much more prehistoric era, the interactions with the people from that time. I've loved the interplay between the four friends the entire series so far and it's just as strong here in the third volume. Paper Girls is a charming delight to read, though this may also speak a bit to what I find charming. 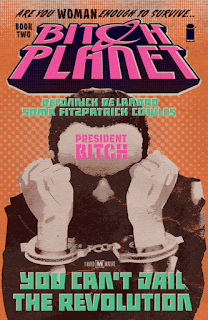 Bitch Planet: One of the most vital, immediate, and (dare I say) important comic books that I've read in recent years is Kelly Sue DeConnick and Valentine de Landro's Bitch Planet. It's a dystopia where "non compliant" women are sent to a prison planet and are also set to fight each other to the death. There is a bit of over the top absurdity with Bitch Planet, but it is also biting commentary on American society. Bitch Planet is all of that, and it is also a fucking excellent book with exceptional storytelling and characterization and the only criticism I am willing to level at it is that I don't already have volume 3 in my hand right now.