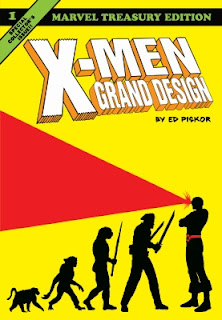 It is debatable whether the mainstream superhero comics by major publishers have managed to do anything super-exciting lately, but there is still one subject only a Marvel comic can do justice to – the convoluted, messy, contradictory continuity of Marvel comics themselves. X-Men: Grand Design by cartoonist Ed Piskor takes a closer look at the mutants who Stan Lee and Jack Kirby turned loose in 1963.

In the beginning, Cyclops, Iceman, Angel, Beast and Marvel Girl were teens in the shadow of Cuban missile crisis. You'd think that 55 years later they should have received their X-pensions already, but that's not how it works in their line of business, and most of them are still running around in spandex in 2018. A lot has went down since then, however – Beast is now blue and furry, Iceman is gay, Angel has lost his wings and Marvel Girl has died several times – and cataloguing all that is Piskor's mission in Grand Design.

It's a fascinating project, and part of what makes it so fascinating is how utterly unlikely it is. The alternative comics creator Piskor – probably best known for the hip hop culture documentary Hip Hop Family Tree and his work for Harvey Pekar's American Splendor – is certainly not among the people you'd guess Marvel would hire to document X-History, but here we are. It's a weird hybrid: the subject matter of X-Men: Grand Design is as mainstream as it gets, but the look and feel are definitely alt comics.

The series is published as individual comics issues but it probably makes more sense to dive into it with the big-page paperbacks that are scheduled to come out after every second issue. The first of them collects X-Men: Grand Design issues 1 and 2 as well as Lee and Kirby's X-Men #1, recolored by Piskor. Toning down the garish colors gives a nice touch to Kirby's art and makes its atmosphere suprisingly close to Piskor's own strips.

The first two issues of Grand Design that are collected here cram between their covers most of what happened in the first 66 X-Men comic books – that's every notable X-Incident between 1963 and 1970 when X-Sales were so bad that Marvel turned X-Men into a reprint comic book for years. In the mid-70s, Len Wein, Chris Claremont and Dave Cockrum would kickstart the title and it would finally become one of Marvel's (and Disney's) major properties, but the first book deals with those 66 issues.

Some of them are summarized with one panel, others with several pages, but Piskor mostly manages to make the fragmentary narrative smooth for the reader. Wolverine, Storm, Phoenix Force and other later additions were not yet present in the comics that are Piskor's source material here, but he goes through everything chronologically, so they make small appearances in addition to the actual, original X-Men. Also present are Banshee, Polaris, Havok and nowadays mostly forgotten Mimic who were all members or at least semi-members of the group at some point in the 60s.

The X-Men have slowly accumulated a gigantic backstory during the last 55 years, so it actually takes Piskor the entirety of his first issue to get us where we are at the beginning of the original X-Men #1 – if we get there at all, that is. It is interestingly a bit unclear if Lee and Kirby's first adventure (which is summarized on the second page of Grand Design #2) is compatible with Piskor's rendition despite it being included in the collection, because all of it doesn't add up if you look at the details too hard. For some readers, that may be a disappointment, but I'm fairly sure that with a project like this, the result is more enjoyable if your approach is that of an artist with a vision as opposed to that of a biblical scholar.

In that holiest of holy X-texts Professor Xavier's teenage mutant superhero boys meet Jean Grey for the first time and fight off Magneto who makes his supervillain debut hijacking some missiles. In this adventure, Jean Grey does not have her psychic powers yet (just as Superman could only take long leaps in his first adventures), and so she can only throw some missiles into the sea telekinetically.

In Piskor's retelling, conversely, she is already there when Henry Soon-To-Be-Beast McCoy is kidnapped by supervillain Conquistador and his henchmen. When Cyclops, Iceman and Angel run into trouble freeing McCoy, Xavier sends in Jean Grey to help them. Upon arrival, she turns Conquistador and his minions into drooling vegetables and makes it clear from the first appearance that she is a force to be taken seriously, not only a token female X-Man with a little softer superpower than his male colleagues.

This is one example of the creative freedoms Piskor has taken, and the book is probably stronger because of them. Still, the project is not about surface detail but the grand design, and reading the comic is a peculiar experience. On some level, you understand that the details and specifics of how exactly something happened are unimportant in a work such as this, even though the things Piskor played around with more or less unorthodoxically are probably going to draw most attention.

Diplomatically speaking, some of the original material that Piskor is covering here is not among the most memorable in X-History. I'm sure that most readers are waiting for the following volumes where we get to some of the juicier storylines, like Dark Phoenix Saga, Inferno, Mutant Massacre and what have you. Part of the attraction, I guess, is seeing how Piskor is going to get some of the more massive and significant events of the Claremont era compressed into their essence and fitted into the overarching narrative – I have absolutely no idea how that can ever be pulled off.

Penalties: -1 occasionally, there's just too much to take in at once. -1 for weaker source than the forthcoming parts of the series

Nerd Coefficient: 8/10 – "Well worth your time and attention"