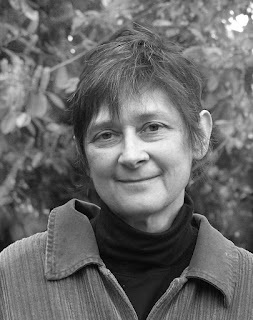 L. Timmel Duchamp is the author of the five-volume Marq'ssan Cycle, which won a special Tiptree Award honor in 2009, and the founder and publisher of Aqueduct Press. She has published two collections of short fiction: Love's Body, Dancing in Time (2004), which was shortlisted for the Tiptree and includes the Sturgeon-finalist story "Dance at the Edge," the Sidewise Award-nominated "The Heloise Archive," and the Titpree-shortlisted "The Apprenticeship of Isabetta di Pietro Cavazzi"; and Never at Home, which includes a 2011 Tiptree-Honor List story, and co-author, with Maureen McHugh, of a mini-collection, Plugged In, published in conjunction with the authors' being GoHs at WisCon. Her Marq'ssan Cycle consists of Alanya to Alanya (2005), Renegade (2006), Tsunami (2007), Blood in the Fruit (2007), and Stretto (2008). Her novel The Waterdancer's World appeared in 2016, and the short novel, The Red Rose Rages (Bleeding) appeared in 2005; she has also published the novella De Secretis Mulierum and dozens more short stories and novellas, including "Motherhood, Etc" (short-listed for the Tiptree) and "Living Trust" (Nebula and Homer Award finalist). In addition to her fiction, she has published a good deal of nonfiction. Since 2011 she has been the Features Editor of The Cascadia Subduction Zone. She was also the editor of Talking Back: Epistolary Fantasies (Aqueduct, 2006), The WisCon Chronicles, Vol. 1 (Aqueduct, 2007), Narrative Power: Encounters, Celebrations, Struggles (Aqueduct Press, 2010), Missing Links and Secret Histories: A Selection of Wikipedia Entries from across the Known Multiverse (Aqueduct Press, 2013), and co-editor, with Eileen Gunn, of The WisCon Chronicles, Vol. 2: Provocative essays on feminism, race, revolution, and the future (Aqueduct, 2008). Her latest novel, Chercher La Femme is forthcoming in 2018.

Mem by Bethany C. Morrow. It’s an elegant deployment a fantastic conceit, exploring the nature of memory and selfhood. Although its style is a sophisticated form of literary fantasy, it resonates powerfully with questions currently in the air, as neuroscientists work on locating specific memories in the brain on the one hand and on understanding consciousness and identity on the other.

The two not-yet-published books that I’m really drooling over are still, alas, in progress—Karen Joy Fowler’s historical novel about the Booth family (of which Abraham Lincoln’s assassin was a member), which I heard her read from about a week ago, and Eleanor Arnason’s “Hearthworld,” a sequel to her novel Ring of Swords, of which I’ve read an earlier version.

This happens more often than one might think. Just a couple of weeks ago I reread the novella that, in my mid-twenties, served as my gateway book into science fiction: Samuel R. Delany’s The Einstein Intersection. On my re-read, I easily recognized all that had captivated me in the mid-1970s, but in this read, the power of its prose and the engaging depictions of the characters drew me through the novella more than its storyline did. I couldn’t help but notice that the most compelling relationship in the novel was that of protagonist Lobey and Spider (who don’t meet until almost halfway through the book), despite the book’s insistence that Lobey’s motive force is the desire to recover/avenge the death of Friza, a la Orpheus and Eurydice, even though the book offers another perfectly good reason for Lobey’s departure from his village. Sad to say, my experience as an editor has a habit of perching on my shoulder, even when I’m reading for pleasure, waiting to pounce. And so, after finishing my re-read, I thought how much better the novella would have been had Delany been able to write the story without Friza—which in 1967 would have been difficult, to say the least. So, while I enjoyed my re-read of The Einstein Intersection and loved its deft thematic explorations, its inner song at times sounded, to my ear, muted or even smothered.

That would be Charlotte Bronte’s Jane Eyre. I probably read it at too young an age, but the story’s emotional power and Jane’s fierce, indomitable spirit resonated with the rebellious, creative child I was. I don’t know if I could call it an influence on my writing, but it was certainly an influence on the parts of me that do the writing.

I’m so glad you asked! My latest book is a novel, Chercher La Femme, which began as my response to Stanislas Lem’s Solaris and Andrei Tarkovsky’s film based on the novel. The situation and premise of these works so intrigued me that I couldn’t stop thinking about them. And yet, their tight focus on individual psychology to the virtual exclusion of other aspects of the situation and premise nagged at me, and so I ended up writing a novel in conversation with them. Both Lem’s novel and mine are about what happens when humans enter into communication with a bafflingly alien intelligence that seduces as well as frustrates them; both novels share in common a fascination with the ambiguities and complexities of communication. Of late, science’s growing awareness of the trickiness of communication between species tells me that humans have an urgent need to find new ways of thinking about the intelligence and communicational strategies of nonhuman animals who are, except to the extent that they mimic the responses humans try to elicit from them, pretty much opaque to humans. For me, at least, Chercher resonates with that need.