It has been two years since I have made it to Gen Con and I found myself glued to my social media feed lamenting with the other GenCan't participants. Despite not actually attending the convention, I am happy to report on some of the big developments that I enjoyed. 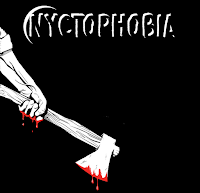 Games Generating Buzz:
Nyctophobia by Pandasaurus Games - Nyctophobia is the fear of the dark and is from first time game designer Catherine Stippell.  Catherine wanted a game she could play with her uncle, who is blind, and developed this semi-cooperative game that features up to four players who wear black out sunglasses and have to rely on verbal communication and by feeling near them on the board. In Nyctophobia, one player assumes the role of a villain right out of a horror film that is pursuing the other players in the woods. The players have to navigate a maze of trees to accomplish their objective and make it to their escape vehicle. As I mentioned earlier, the survivors can only feel their immediate surroundings and need to communicate effectively to one another if they hope to survive. This is one I have had the good fortune of playing and it is unlike any other tabletop experience I have had. 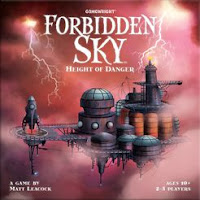 Forbidden Sky by Gamewright - We finally have a new cooperative Forbidden game from designer Matt Leacock.  Forbidden Island and Forbidden Desert are staples in my house and I am very excited to take to the sky! Players are in the center of a storm and have to connect a series of wires to power their escape rocket. Gamewright only sold 100 copies of this game per day so I will have to wait until September until I can play this one with my family.

Holding On: The Troubled Life of Billy Kerr by Hub Games -If you have ever wanted to play a board game in which you are part of a nursing staff who provides care for the terminally ill you are in luck! In this game you are tasked with trying to save Billy Kerr who just had a massive heart attack.  You do this by delving into his troubled past and piecing together his memories. The goal is to get him to confront his regrets so he can die in peace. This is a game I definitely want to try, but I'm not sure how often I could play a game with this heavy of a theme. 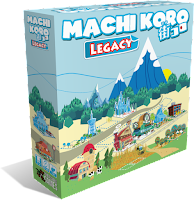 Big Announcements:
Machi Koro Legacy - Pandasaurus Games surprised everyone when they announced that Machi Koro is getting the legacy treatment! The godfather of legacy games himself, Rob Daviau, teamed up with JR Honeycutt to figure out a way to allow players to experience a 10 game narrative set in the Machi Koro Universe. At the end of your 10 game journey, players have a unique edition of Machi Koro that they can play with their friends. Definitely going to pick this one up to play with the family.

Return to Dark Tower - Restoration Games was somehow able to figure out the murkey copyright issues with Dark Tower and announced a sequel to the game that came out in 1981. In the game players must work together to gather resources, fight off bad guys, and ultimately take on the tower itself. Restoration Games has produced some amazing titles thus far (I can't wait to get Fireball Island!) and they don't seem to be slowing down.