96 Hours at the Biggest Gaming Convention 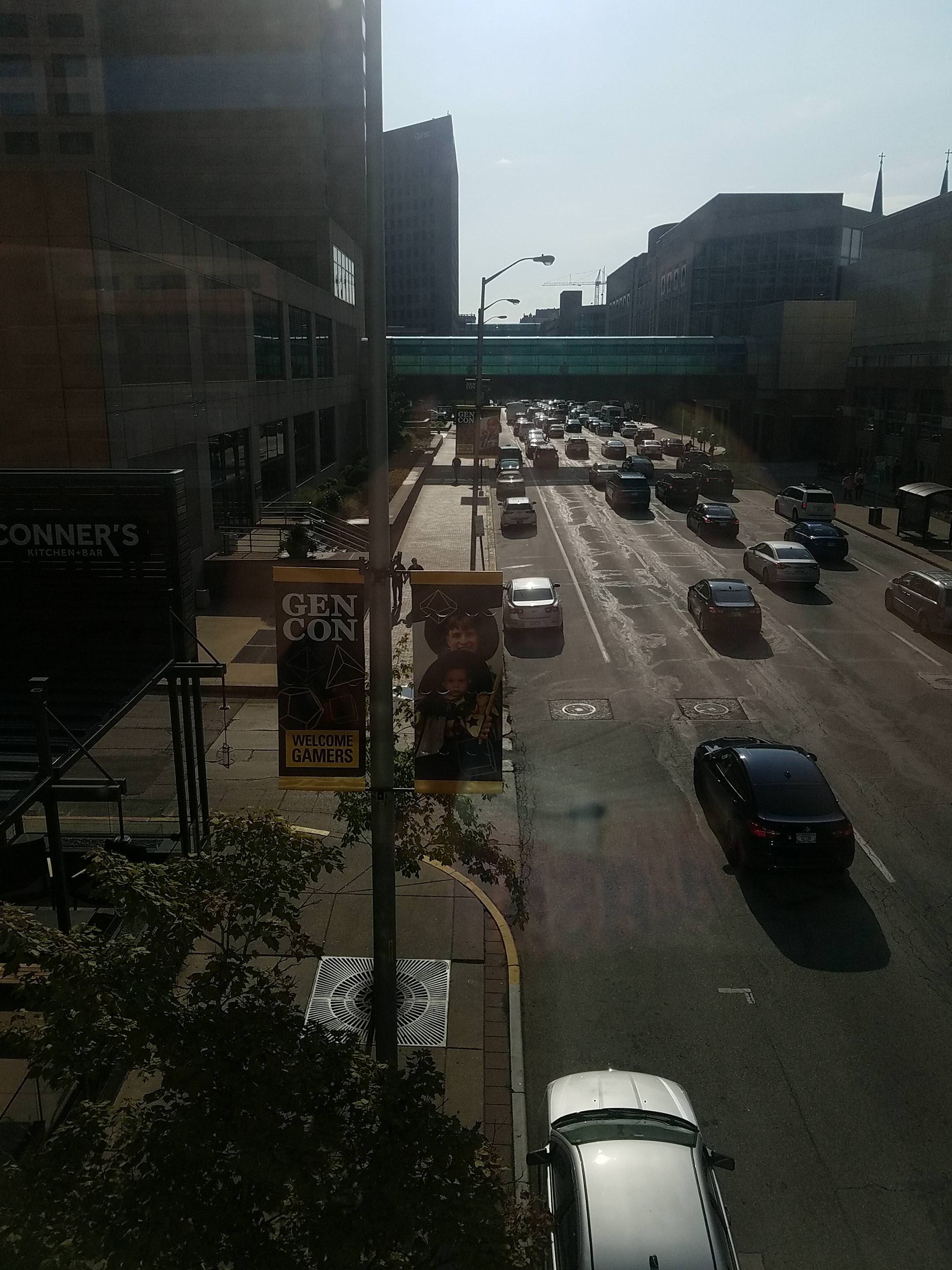 For the last few years, Gen Con has been something both too close and too far away. I've been either too cheap or too broke to attend, even though Indianapolis is (relatively) close to home. I decided to make the trip this year and I had a great time!

As my first Gen Con, I attended as a fan. I came to play games I don't get to play in my area. Pre-con, I signed up for six games across the four day con, one of The Strange, one of Numenera, and four of The Dark Eye. I knew these would be beginner/introduction type games, but I've owned all of them for a stretch of time and I just wanted a guided experience in playing them.

The Dark Eye - The Dark Eye (TDE) is Germany's version of D&D. It's their most popular RPG and has had one continuous setting that's evolved over its 30+ years. As it was described to me at least twice, it's more Brothers Grimm than Tolkien. Each region of its setting is some form of ancient Europe, from a raiding viking nation, to warring dark age states, to Arabian Nights-esque deserts. In some ways, TDE is more complex than D&D.

The first aspect that stuck out the most to me was contested attack rolls. In D&D, and most RPGs, attacks are reduced to a single roll: your die roll modified by a skill bonus/penalty against a target/to-hit number that belongs to your enemy. The defender, more or less, stands there while the attacker takes a swing at them. TDE makes this a little more interactive. The attacker rolls against their own skill. When the attacker fails, it's because they missed. If they succeed, the defender doesn't just stand there. The defender gets to roll a dodge or parry against their own respective skill, which gets more difficult the more you have to do it in a single round. This back and forth can slow combat down even more than in other games, but it feels like it's giving more agency to both players, which high skill attackers having the ability to miss less often by rolling against their own numbers, and defenders get a chance to user their own skill to avoid the attacks. These are important because the penalties for damage are harsh in TDE, with successive life loss increasingly making it more difficult to act. In three game sessions, I don't think we killed anything, but we definitely damaged enemies to the point of retreating. I love this because it sets up a game where enemies can have names and grudges and reappear or redeem themselves, while D&D is largely a monster mash. Not that there's anything wrong with a monster mash.

The other interesting aspect is skill rolls, which require three dice rolls against three of your character's ability scores. That may sound like it's inviting three opportunities for failure, but your skill rating allows you to negate failures. This balancing effect means that you can more often succeed at skill checks in things that you're good at, and your level of success can be quantified because your remaining skill points improve the quality of your success. This also gives built-in narrative reasons reasons for failure. If you succeed on strength and agility during a climbing roll, but fail in courage, you've basically described for yourself how you failed; you're physically capable of climbing that thing, but in that moment you didn't have the heart.

I signed up for four games, but only attended the first three. In those three games, I bullied a serf as a good-looking viking-for-hire at a wedding between rival nations, I lost my temper and charged as fast as my dwarven warrior's legs would carry me at handful of orc slavers, and I deftly picked locks as a high-skill but extremely squishy thief. After three games, I'd seen enough to be thoroughly impressed.

Numenera and The Strange - (some light disclosure: I backed a kickstarter for an updated version of Numenera) I'm combining these because they're the same game system (the Cypher System) for two wildly different settings. Numenera takes place a billion years in the future, where we've lost knowledge of how technology and magic work so they're indistinguishable and wildly dangerous, and The Strange is like The Laundry Files meets Sliders. The Cypher System reduces ability scores to just Might, Speed, and Intellect, abstracts skills, and gives everyone disposable powerful magic items. It's kind of the opposite of TDE, where the GM rolls nothing but sets difficulty of the action, so every roll is unopposed. To affect these rolls, you can spend points out of your ability score pools. The catch is that these same pools count as your life counters, so physical damage drains your might, then your speed, then your intellect, and then you're dead. Since this wasn't an on-going campaign, everyone was pretty loose about using their ability pools, and no one died, but I could see how an on-going game would prompt more conservative play and result in more failed rolls. The settings were both interesting, but I think I enjoyed the octo-post-apocalyptic medieval world of Numenera more than the The Strange's bioengineered sci-fi dimension of Ruk.

Battletech - Hey, wait a minute. I didn't sign up for this! But I did skip on that last TDE session. I tried to get into a game of Dungeon Crawl Classics, but it was full, so I hopped over to the Battletech tables for a refresher on that system. It's still high on the number crunching and wargaming end of the spectrum. But my Jenner outmaneuvered my opponent's Panther and I got up in his face and lit him up like a Christmas tree. His PPC would've hurt if he landed a hit, but he couldn't make it happen. We ran out of time, but I scored it as a victory.

Whoa. This was my FLGS except packed full of people. Just games on games on utilikilts on dice on games. It was just an unholy amount of people and stuff in one place. I'm not much of a browser though, so my experience here was checking the map for a vendor I wanted to visit, squeezing through the hordes of people slow walking or browsing until I found them, checking out what they had, and then moving to the next vendor. So I saw a ton of stuff, but I'm allergic to pitches so I didn't stop to play much. I did walk out with my Numenera kickstarter rewards (two massive 400 page tomes), Scum and Villainy (Blades in the Dark in Space), The Sprawl (cyberpunk PbtA), and Vampire: The Masquerade V5.

There was a ton of cosplay, but I learned that for every picture in a Best Cosplay album, there's at least 50 okay cosplays that didn't make the cut. Good efforts but sometimes the seams were showing or I could tell what they were going for, sort of.

Here's a real shocker: no one really stank. I squoze through a ton of people in that exhibitor hall, and I wasn't constantly gagging on someone's body odor. Dumb stereotypes of stinky gamers were deeply challenged!

Another shocker: I didn't come home with con crud. Again, extremely close to a lot of people at times but didn't get sick at all!

I stayed at a hotel near the airport and that was a mistake. I'm cheap and those rooms were cheaper than downtown, but they're very isolated from everything (seriously, nearest gas station was a mile away), so everywhere I went was a 15 minute Lyft. I could've saved on Lyfts and spent that money on the hotel room. Lesson learned there.

I'm not going to bother taking any books next time I go. I took a small selection, but I got way more mileage out of my Kindle Fire with Dropbox and my game book PDFs. I made the mistake of picking up my Numenera kickstarter books before I was done for the day and had to carry them around everywhere to the detriment of my back.

There was essentially no D&D. Wizards of the Coast wasn't there. Some other people were running D&D games, but it was very surprising to me that the biggest RPG in America wasn't at the biggest gaming convention in the world.

Will I go back? Almost definitely. Maybe not yearly, but I had a lot of fun and I'd love to go again. Next time, I'd like to explore more panels and opportunities to learn, but I'm definitely still going to play some games, new and familiar. And maybe take some pictures next time.