A great choice for watching classic sci-fi with younger audiences 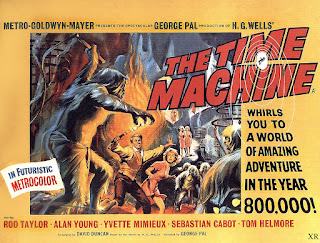 There was a period of time, about fifteen years ago when I was developing a time-travel screenplay, when I was focused pretty intently on H.G. Wells' The Time Machine and a couple of its adaptations. I know I watched the 1960 version with Rod Taylor (probably best known for Hitchcock's The Birds) at that time, but I confess that in my mind it was overshadowed by the really quite bad 2002 version. I wish that had not been the case.

I recently dusted off 1960's The Time Machine, which was produced and directed by legendary cinematic puppet innovator George Pal, to watch with my little girl, and it was a wonderful experience. If you aren't familiar with the story, in the broadest sense it is that an inventor develops a machine — sort of a steampunk chariot with cushioned seating — and travels hundreds of thousands of years into the future, where he finds a race of docile, ignorant humans who call themselves the Eloi. The Eloi are menaced by mysterious creatures of the darkness called Morlocks. The inventor finds the Eloi insufferable and hurries to race back to his own time, only to discover the Morlocks have absconded with his sweet steampunk ride.

There are a lot of things to recommend about this movie. The book was written in 1895, and Pal decided to keep the film's setting there, in order to have George (Taylor) stop off in some "future" times that were now past-tense for the audience, namely World Wars I and II. This gives the film a nice thematic element relevant to Cold War audiences to hang its hat on, as George has here invented the machine in order to try to escape human beings' warlike compulsions, and hopefully find a future time where humans have learned to live in harmony. To our eyes today, the effects are obvious and pedestrian — time-lapse photography, matte paintings, and yes, flaming oatmeal standing in for lava floes — but they are wonderful and fun in a kitschy way. Rod Taylor gives a solid performance he's totally invested in, without winking to the audience. The Morlocks are fantastic. Truly great movie monsters. I mean, the Eloi are deeply irritating, but I found this to be a minor complaint.

The upshot, really, though, was that this was a great way for me to share my love of sci-fi and classic movies with one of my kids. We've watched The Day the Earth Stood Still and Forbidden Planet and the parts with robots have always been big hits, but this was one of the first times my nine-year-old has really sunk her teeth into this kind of movie. We watched it twice in two days, and she asked to read the original Wells book. It's hard to ask for a better outcome than that.

I will also include some fun facts that made a contemporary re-watch of the film extra special (for me). First, Alan Young plays George's best friend. Young went on to become the voice of Scrooge McDuck in Disney's A Christmas Carol. One of George's other friends, and one who has quite too much to drink, thank you, is the actor Tom Helmore, better known perhaps as "Gavin Elster" in Hitchcock's Vertigo. And finally, and this one is something else, there are a handful of music cues I noticed as George is investigating the future that I knew I'd heard before. It took me a while, but then I placed them: they were quoted by Alan Silvestri in the score for Back to the Future. As much as I love Back to the Future, and Silvestri's score, I know have an even deeper appreciation for it, for slipping in quotations from Russel Garcia's The Time Machine score from 25 years earlier. Hats off, Mr. Silvestri, hats off.

Bonuses: +1 for super cool sci-fi art direction and set design, from the time machine to the Morlocks' lair; +1 for the Morlock costumes; +1 for the supporting cast

Penalties: -1 for the Eloi looking like a bunch of Aryan beach bunnies

Cult Film Coefficient: 8/10. Stands up against the test of...sorry...time.