Pull list was longer than usual so we are diving right into the books this week! 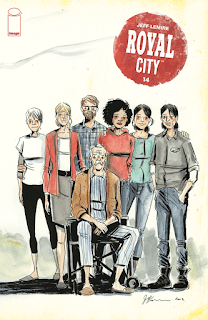 Pick of the Week:
Royal City #14 - While I am sad to see one of my favorite current books come to an end, I am happy that I was able to experience the life of Royal City and highly recommend this series to everyone. Learning about how everyone in this messed up family is coming to peace with the changes in their small town, a death in the family, and the other issues they are dealing with really gives me hope. Hope that people are able to roll with the bad times and persist. The quote that sums this series up for me is from Pat's inner monologue. "That's the thing about the past. It's gone. Just because it forms us, it doesn't mean you have to let it define you forever." Wise words that have a profound meaning given the turbulent times in which we all exist.

The Rest:
Cold Spots #1 - A spooky tale from Cullen Bunn and Mark Torres debuted this week and it leaves me with more questions than answers. There are some sort of presence in the form of ghosts that seem to be gathering in a central location. This has drawn the attention of the town folk and has brought with it unseasonable cold weather. Add in a missing woman and child and we have a very intriguing mystery forming. This book had me at Bunn and horror, but Torres does a phenomenal job with the overall atmosphere and tone for this story. One to keep an eye one.

Daredevil #607 - For the first time since he took the helm I am a bit concerned with where Charles Soule is taking this series. After surprising us with Matt Murdock meeting his twin brother Mike, we learn that Mike was accidentally created by Reader after going over case files Matt sent over to help bring down the Kingpin. While I appreciate the issues that may arise having a Matt Murdock twin interfering with things, I am not quite sold on the idea. It is novel and I will check out the next issue to see what grand plans Soule has for this development.

Darth Vader #20 - After not being sure about the direction Soule is going with Daredevil, it is crystal clear which way he is headed with Darth Vader. I sounds like a broken record talking about this series, but the sheer power and force of Vader in the comics is something to behold. Vader takes swift revenge on a pair of inquisitors he has concerns with and then openly defies the Emperor in order to make a very interesting demand. I won't spoil what Vader wants, but it is clear he wants some space to himself after his slaughter of the Jedi.

Doctor Aphra #23 - To set the scene where this book is headed, Aphra is currently trapped in a floating jail that is dealing with a toxic spore issue and is on a crash course with a neighboring inhabited planet. She and other prisoners have been abandoned and she is currently hatching an escape plan.  I will admit that this arc left a bit to be desired, but it is setting up an epic clash involving Aphra's knowledge that Vader wants to supplant the Emperor. It seems an encoded message has reached Vader and it will be interesting to see how it pans out and the impact it has on the Empire.  After all, public knowledge of such a plot would provide a lot of fuel for the Rebellion.

Redneck #14 - We are finally seeing the bigger universe in which the Texan vampires in Donny Cates' series exist and I am very curious to see what this next arc will bring. We are introduced to the Parliament of Elders who apparently own all of Austin. The Bowman family has houses on the land, but that land is property of this powerful group. These individuals have grand plans for Texas and I have a feeling that this series is going to take a very interesting turn.

Hit-Girl #7 - In part 3 of this mini-series from Jeff Lemire, Hit-Girl remains in Canada and is currently trying to escape from Billy Baker and his gang of thugs. It has been an odd journey with Lemire penning such a violent series, but his subtle touches that hearken back to his ability to connect characters with meaningful relationships add an interesting element as people get their heads lopped off. I will finish this mini-series, but will probably take a break from the upcoming Kevin Smith arc in which Hit-Girl is in Hollywood surrounding the making of an upcoming Hit-Girl movie.