With the release of the trilogy's final game earlier this year, Banner Saga has successfully concluded its apocalyptic Viking procession through all my feelings. 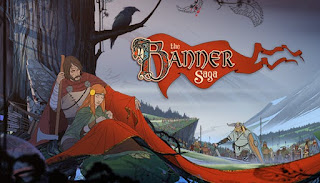 It's the last battle of this game, and I already know I'm about to cry.


I always get here slightly differently. I've made the choices that get me to Boersgard enough times now that I know what the big ones will do, but there's still an element of luck in how things go: sometimes more of my clansmen make it, sometimes I play more recklessly or accept help from those who turn around and betray me, and end up paying the price. But when I get to this point, I almost always make the same - extremely off-brand, to those who know my narrative preferences - decision, and it never fails to break my heart. In fact, that's probably why I do it.

The Banner Saga, a trilogy of games whose closing chapter was released in July this year, is full of these sorts of moments. A Norse-inspired fantasy set in a world bursting at the seams with history, Banner Saga follows a group of unlikely heroes as they flee from what appears to be the end of the world: the sun has stopped in the sky and the Dredge, a race of unintelligible metal-clad humanoids, are pouring south in droves, destroying human settlements along the way. In the west, a group of Varl - a race of all-male horned giants, who are slowly dying of old age and battle injuries since the god who made them has died - escort a human prince towards a negotiation at their capital. In the east, the tiny settlement of Skogr becomes one of the first to fall to the Dredge, with hunter Rook and his daughter Alette leading the remainder of their people south towards safety. It quickly becomes clear that more than a simple invasion is going on, and as the stakes get higher, the prognosis for the world gets bleaker and bleaker. It's Rook and Alette who form the heart of this journey, keeping the Banner of Skogr alive through tragedy after tragedy.

Combat-wise, this plays out in a couple of ways. The heart of the game is a tactical, turn-based battle system, where six of our heroes face off against various Dredge, humans, horseborn (centaurs!), bears and more spoilery things. While you're often outnumbered, the game lets you direct individual team members in turns that alternate between each team, until one team has a single person standing. Banner Saga also employs an interesting dual health system where strength and health is determined by the same number. What this means is that a large team of injured (and therefore weak) members can end up being run through by a smaller group at full health who are taking the same number of turns, forcing you to adapt your tactics accordingly. Outside of battle, wider choices about your journey are presented through text-based conversations with your allies and enemies, with choices affecting your supply levels, caravan size and morale. The developers themselves have called this "King of Dragon Pass meets Oregon Trail", which is pretty accurate: some of your extended road-tripping family are going to die on this hopeless march to safety, and the only thing keeping you from total failure are your choices as a post-apocalyptic Viking leader.

And while the combat is highly enjoyable, it's the story that drags me in every time. In the Banner Saga, developers Stoic have honed the concept of hopeless, far-reaching video game choices to an absolute art. I have no doubt that somewhere on the gamer internet, there are guides which lay out in perfect detail what the "right" choices to beat the game are, but the narrative experience itself means that those mechanical decisions are rarely the most satisfying or consistent. Instead, every time I play, I find myself intrinsically invested in choices I know aren't optimal. Yes, my caravan leader says, we'll let these hungry, starving survivors join with us even though we don't have enough food. That's fine, I'll just spend this resource I could otherwise use making my heroes stronger to try and feed everyone. Well, now everyone is underleveled for this upcoming battle, and now they're injured and need to rest, so that's OK, we'll just hang out here and... oh, I've almost run out of food again. I guess I could accept this bribe from the bandit troupe up ahead but... no, I should save the people they are attacking instead. That's the right choice.

And so on, for three games. What the Banner Saga, and other games like it, deliver, is a storytelling experience that's more of a river delta than a straight path. Every time I play, the chapters are the same; the characters move at roughly the same pace across the screen, and fight battles in the same places. But within those chapters, my characters' choices diverge in ways that produce very different narrative experiences. The prince of the humans might survive a siege and learn his lesson, or maybe I could let him die of his own stupidity. A mercenary leader succumbs to madness alone, or confides the dreams and visions that threaten to overtake him to his shieldmaiden. This father does anything to keep his daughter safe and sheltered, while in another life, the same man trusts her to create her own destiny. That the Banner Saga is able to treat all of these permutations as equally valid is one of the most compelling aspects of video game storytelling to me, and the trilogy's final instalment finds a way to bring back even some of the quieter choices for both narrative and gameplay purposes. Having a character near the end call out one of the few choices I did "metagame" for, way back in the Banner Saga 1, turned what was already a tense scene into a moment that literally felt guilty for me as a player. The threat of being locked out of certain endgame relationships because I'd made a super mean choice that the game hadn't punished me for at the time is the kind of thing that can be incredibly frustrating, but in Banner Saga it feels more than justified.

My enthusiasm for this game doesn't mean there aren't things it could have done better. In particular, the human-coded cast are overwhelmingly white (there's one slightly darker skinned Varl and one Mongolian-coded character among those with human racial traits), while the army of Dredge are mostly in jet-black armour, and the generally darker-furred horseborn have a culture that doesn't understand why children shouldn't be murdered. Humans are also overwhelmingly heteronormative, while the Varl, a single-gendered asexual race with no concept of family or romantic love, also end up being textbook examples of toxic masculinity, whose constructive, non-human relationship building is all very much off screen. While the game does a reasonable job of both introducing and interrogating cultural gender roles (see, for example, Becky Chambers' piece on the first instalment), it's very hard not to read the exclusion of diversity as a manifestation of "queer characters and POC wouldn't be historically accurate". In a story driven by increasingly complex interactions with chromatically black metal people coming out of the ground, which therefore clearly does want to interrogate questions about race and difference, this choice is even more indefensible.

From a gameplay standpoint, while the third game maintained my emotional investment and brought closure to the story in a way that I felt did great justice to the characters I'd invested in, some of the core charms of the first two games don't come through as strongly here. In particular, interactions within my caravan were more constrained, with some allies from the first two games now left completely in the background. The story also does a better job of coming full circle on understated plot elements from the Banner Saga 1 than it does integrating what felt at the time like more pressing problems in Banner Saga 2. Without strong presence from a wider range of characters, and with a battle system that becomes increasingly exhausting as you progress, the rising bleakness in this game risks becoming pure emptiness, and I'm not sure I would ever replay this game without going through the first two immediately beforehand, to ensure I encounter it in its proper narrative place.

Despite not being perfect, however, I really do think these games represent something special in gaming and in storytelling. I very rarely reread novels, but I've replayed the first games of this trilogy multiple times, and I've not yet tired of the journey they have taken me on. I suspect the day when a video game reaches the finals of Best Dramatic Presentation are a long way off, but when it does happen, I want it to be something like Banner Saga: a game whose mechanics bring out the absolute best in its all-encompassing, heartbreaking story.

Bonuses: +1 has permanently invested me in what is, I repeat, a very off-brand narrative choice; +1 did I even mention the animations? ;+1 And the music? Seriously, there is so much understated beauty in this game.

Penalties: -1 It's always a bit sad when the final instalment of a trilogy is the weakest entry, though not by much; -1 suspends disbelief for world-eating serpents and magical lightning but not for LGBTQIA+ characters

Nerd Coefficient: 8/10, "well worth your time and attention."