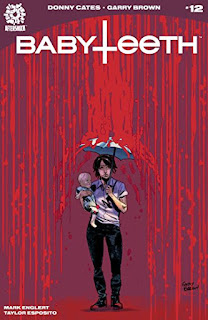 Pick of the Week:
Babyteeth #12 - This series has evolved effectively and we are treated to a quieter issue that lulls the reader into a false sense of security only to have the rug swept out from under them. Sadie is desperate to return to the Red Realm to save her son.  The only person who is capable of opening it from this side is Simon, a child who recently returned from the Red Realm and his mother doesn't want him to endure any more pain. As a parent this issue really resonated with me and I think it is a big reason why I have enjoyed this series as much as I have. The dialogue between Sadie, her father, and Simon's mother is very moving, when they aren't shouting at each other. The tease at the end of the issue has me salivating for issue #13.

The Rest:
Ether: The Copper Golems #4 - Boone and his crew manage to shut down one of the portals being powered by a copper golem, but don't quite understand who is opening these portals between the Ether and Earth and their motivation. Their journey brings them to the Enchanted Primeval Forest where they are greeted by a master storyteller who enchants most of the group in a series of tales tapped to their inner most psyche. This allows us to experience a series of mini-comics within this story that are an absolute delight. Not sure how Matt Kindt and David Rubin will be able to wrap things up with the next issue, but I will  be there for it.

Gideon Falls #6 - The first chapter in this series reached a stunning conclusion in a very trippy issue. Father Fred is attempting to save Clara and has an unexpected trip in and out of the mysterious Black Barn that is a central force in this series. I don't pretend to understand what the Black Barn is, but Clara's brother is involved and there are dark forces at play. Meanwhile, Noton and his therapist have found the door to the Black Barn and hatch a plan to assemble it. Very curious to see what happens as Norton begins to assemble the pieces of the Black Barn he has been collecting throughout the city of Gideon Falls and I'm worried that we will meet Clara's brother in the near future and it doesn't bode well.