Empire of Silence starts a new space opera series, chronciling the rise to power of a protagonist who is destined to do great and terrible things to alien species and humanity alike. 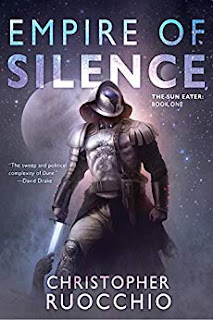 Hadrian Marlowe is a criminal, on the edge of his survival, captured and scheduled to be executed for his crimes. We are told he is guilty of genocide of an alien species, and mass murder, including that of the Emperor himself, destroying a sun and killing billions of human beings in the process. He is a terrible, mythic figure in the far future he inhabits. And now he is stands ready to tell his story to readers.

Empire of Silence starts his life story, starting with his upbringing as the son of an Archon, the presumptive heir to a rich and powerful noble who is himself one of the most powerful vassals to his liege lady (the mother of his wife). In other words, it is a position of privilege and wealth and power undreamed in a far future feudal future. Hadrian does not want particularly to be Heir, he would rather be a scholar. However. his father has plans of his own for his son, and they revolve around the powerful religious arm of the Empire, the Chantry. The collision of those desires land Hadrian on a distant planet, with nothing save a chance to rise to his terrible destiny.

There are some interesting things the book does well. There are touches of the worldbuilding that really sung to me as a reader. The main character is very interested in languages, has multiple languages under his belt, and so the text spends lots of time with other languages, their nature and structure  The book  makes use of those other languages as a tool for description as well as worldbuilding and character development. In the moment, in the head for these details, the novel shows it's richness and strength, best.

There is a rich and varied universe in here, too, beyond language. There are extensive appendices at the back with names, planets, and concepts and these concepts are also well introduced into the book. The author spares nothing in filling his world with these concepts. The appendices explain that the book is a translation into classical English, with approximations, which is why the book is full of classical references and names, especially for military terms. This does reinforce the feudal future nature of the world, but gives it a Greco-Roman cast to that feudal future more than a Medieval one.


For all the novel tries to do well, there is, for me as a reader, a gigantic and unmistakable flaw in it’s worldbuilding and that is the ill conceived sense of scale and expanse of the Empire and other polities around it.  We are told and shown very early that the Empire is very big, huge, sprawling across arms of the galaxy in size. It’s been around for millenia. And yet, the faster than light travel that the Empire and other worlds have is painfully slow and the distances are just too vast for believability that this entity could last. Hadrian wants, early on, to be a emotion-free scholar like his beloved tutor Gibson, a scholiast. He is told that as he gets on board the vessel, that it will take a total of 13 years and that he has to be a cryogenic freezer for the trip. And this seems to be the norm, since there are passengers who have already been on the ship in the freezers for 21 years, on a voyage to yet somewhere else. These time frames just don’t work in the real world. How can the Empire maintain itself and keep from fracturing again and again when it takes years for the Empire to actually do anything. There is a FTL communications system, which does help, but if it takes years for an Imperial fleet to get to a rebellious system, that system has plenty of time to lay in enough surprises for any incomers.

Trade and commerce are even worse. What merchant on a spaceship is going to take a ten year journey in a freezer with only automatic controls to guide oneself? Especially since there are no guarantees that bad things won’t happen on the far end because of failed technology? Or, oops, in the four years it took you to get there from the next system over, the planet has a plague and you can’t even refuel, sorry. Also there is a mention at one point that the alien indigenous members of a planet had been taken off world to others, as use as slaves. How? How did they manage to freeze them successfully in the first place, given how little they actually know about the alien’s biology?  The book also makes uranium of all things, an extremely valuable resource, enough that it’s made the fortune of the Marlowe family. That’s really this galaxy-spanning civilization can do? Uranium? Even with the theoretical technological restrictions?

The problem of Hadrian, though, is inescapable even when the novel was head-down on a planet and the worldbuilding of the galaxy could be ignored. We remain entirely in Hadrian’s point of view, without deviation, and frankly, if you are going to serve up a main character who has a grand destiny to stride the stars, parallax is precisely what you need. Even Irulan-style epigrams would have been welcome to give us some perspective outside of the man’s own head. Instead, I felt trapped with a character I wanted perspective on more than a deep dive into his discursive thoughts.

In addition, Empire of Silence, in my opinion,  is trying too hard to be Dune. Although as noted above, there is plenty of invention, a fair amount of it is in straight up aping of Herbert’s novels. The parallels get repetitive in the worldbuilding over, and over. Religious order with lots of power and independent of the Emperor. Check. Strong theoretical bias against certain kinds of technology. Check (although that prohibition and regulation seems to often be more lip service than anything we see inside the story). Personal shields that stop missile and beam weapons but not hand to hand combat? Check. People trained to work with statistics and logic, instead of forbidden computers. Check. Past History that hints at a revolt and reaction against Artificial Intelligences. Check. Atomic weapons possessed by Houses, but not allowed to be used. Check. Intrigue between Houses, including the importance of bloodlines. Check. Hints at a cosmic, grand destiny for the main character right from the start. Check. It became a game for me to try and spot these sorts of things as the novel progressed. The main character starts on a lush edenic world where he has power, journeys to another world, loses his power and status, and has to build it up again. Instead of a desert world, he is on a ocean dominated world. And so forth.

By the end, with Hadrian’s life story only partly begun, I felt something I should not feel at the end of reading a book: relief. I am, sadly, not inclined to read more in the universe. Starting off with this being a Confessions style narrative tells me that I know where Hadrian Marlowe is going to end up...and frankly, there is a lack of interest in the character for me as a reader to want me to fill in the gap between the ending of this book, and his imprisonment. Certainly, parts of the world are rich and interesting, even if as an aggregate it makes no sense, but the desire to see more of the universe when I am not invested in Hadrian enough to want to do so? No.

Bonuses : +1 for strong and interesting individual ideas on worlds and cultures
+1 for immersive description

Penalties : -1 for the inescapable problems of the basic space opera conceit.
-1 for a lack of perspective on a main character badly in need of one.
-1 for trying too much to ape a classic SF novel without being it’s own thing