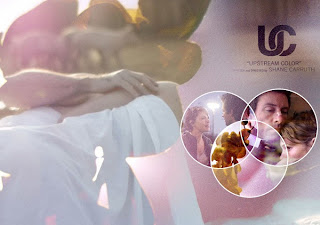 You are at party. There is a man there that you do not notice. In a small baggie, he has two capsules that look like Tylenol. Inside of these capsules, are worms -- parasites -- that he has carefully harvested. The man will slip one of these capsules to you, and you will become his slave for a time. He will cause you to empty your bank accounts while under hypnosis. He will use Henry David Thoreau's Walden to give a framework to your induced madness. When you have nothing left, he will send you to a man who will cut the now-giant parasites out of you, and place them into a pig. You will awaken with no memory of what has happened to you. This will be the beginning of your story.

In 2004, writer/producer/actor/composer Shane Carruth arrived out of total obscurity to win the Sundance Grand Jury Prize for his inscrutable time-travel movie Primer. It took him almost ten years to get another movie made, and the result is the even less-scrutable Upstream Color. It begins as I have described above, and from there it unfolds almost entirely in ellipses. Carruth sequences truncated scenes (with almost no literal connection either to what happened immediately prior or to what will immediately follow) into a series of temporally and contextually disjointed movements in which a man and woman meet, more or less fall in love, a pig farmer collects and manipulates nature sounds, lies are told and apologized for, lives become more, then less, then possibly more unraveled, and a number of people are drawn together.

On the one hand, Carruth's movie is utter nonsense. That said, it is the kind of nonsense that we can be deeply affected by. It is evocative without being literal, both moving and disturbing, and it seems to constantly be reassuring the audience that "It's ok; it doesn't need to make sense." I realize that this review is a departure from how I usually write cult film reviews, but that's because the subject matter is so different. Other reviews I've read of the film draw the easy comparison to Terence Malick because Malick recently released the decidedly unconventional Tree of Life, but I think that's a dull analogy. Of the movies I've seen, Upstream Color is most similar to Alain Resnais' Last Year at Marienbad, where both films are built around a central mystery that is secondary to the lyricism of the imagery. Structurally, the film is probably most comparable to a modernist poem, like T.S. Eliot's The Waste Land. Carruth uses repeated images in different contexts like a refrain, interweaves subjective imagery and juxtapositions that we understand are not meant to be literal but symbolic, and allows the movie to work like a literal dream, where the dreamer must attempt to construct meaning from a series of images whose connections are implied only through proximity.

I probably sound like a pretentious nut. I think that's fair. But I wouldn't want to lead you on with some straightforward plot summary (if one is possible) and have you walk into a visual poem expecting a sci-fi follow-up to Primer. If what I've described above sounds good to you, I have no doubt that you will enjoy Upstream Color, and probably want to enjoy it more than once.

Bonuses:: +1 for Carruth's meticulous camera direction; +1 for the score/sound design, which is as perfectly off-center and enigmatic as the rest of the movie

Penalties: -1 for elements of the ending that felt cribbed from Eternal Sunshine of the Spotless Mind

For an explanation of our non-inflated scores, explore this lovely hyperlink.
Posted by vkotrla at 12:00:00 AM